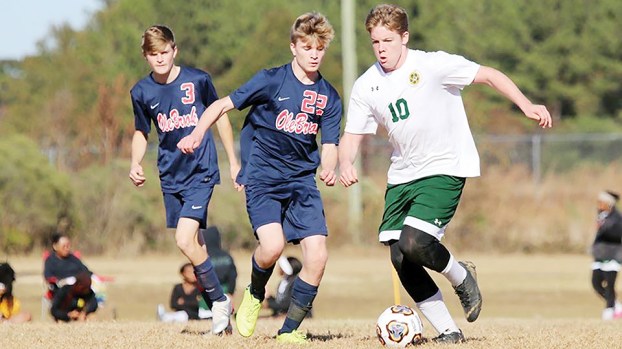 The Brookhaven High soccer team was the only area school to play Tuesday night as both Ole Brook teams took wins over Lawrence County on King Field. The Panthers are back at home Thursday night as they host Bogue Chitto with the girls’ match starting at 5:30 p.m.

The Lady Panthers notched a 7-0 win over LC to move their record to 4-3 on the season. The Lady Cougars fell to 0-5 with the loss.

Miller, Kilpatrick and sophomore Layla Woodall had one assist each. Goal keeper Maddie Brabham — a senior — was in net for BHS.

The BC girls come in with a 2-3 record after dropping a 7-0 road loss at Pelahatchie on Monday.

The BHS boys were 5-2 victors over Lawrence County. Sophomore Cole Cruthirds scored four goals and junior Trace Brady added another for coach Aaron Ayers. The Panthers are now 2-3-2 on the season.

Brady also had an assist, as did sophomore Bryce Bradley and eighth grader Ashton Ogletree. Goal keeper Bryce Smith — an eighth grader — made seven saves in getting the win.

The Bogue Chitto boys come in with a 4-0-1 record after beating Pelahatchie 6-3 earlier this week.

The Loyd Star teams — both coached by Dale Brister — are off Thursday night before hosting Hazlehurst Friday. The Hornets sit 1-2-1 on the young season while a veteran Lady Hornet team is 3-3.

The Lady Hornets beat Raymond 1-0 Monday with a first-half goal that held up for the duration.

Wesson hosts McComb Thursday night for a pair of matches. The girls’ game will start at 5 p.m. and be followed by the boys’ match.

Here’s a roundup of how area teams fared on Tuesday night along with a look at who’ll be in action... read more