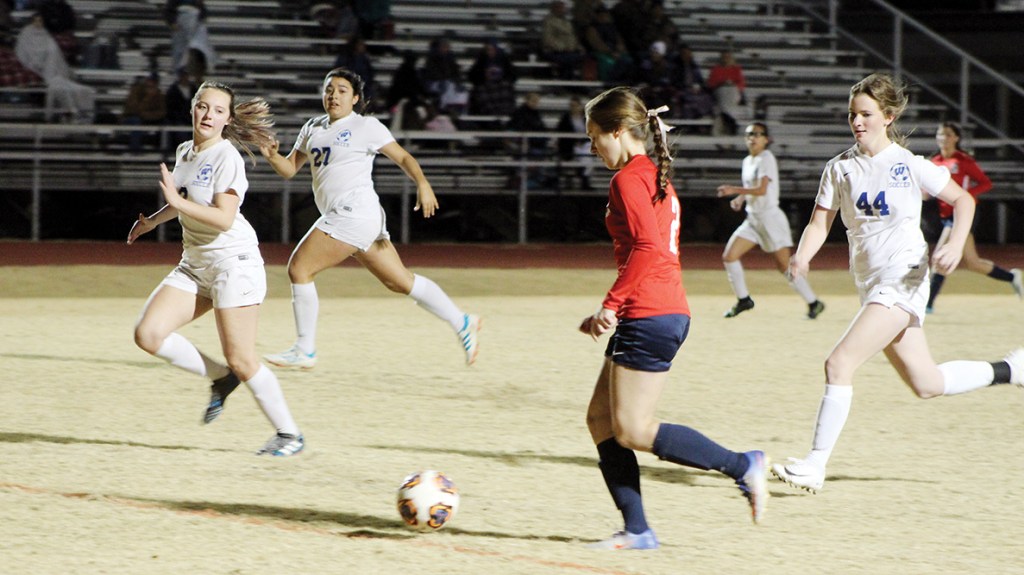 Photo by Cliff Furr Brookhaven High senior Madi Miller makes a run into the box as Wesson defenders Kaleigh Frederick (12), Ella Silvan (27) and Kyla Smith (44) close in. Miller scored on the possession but the Lady Cobras took a 5-2 win in the match.

The Wesson Lady Cobras won their third consecutive match with a 5-2 victory over Brookhaven High Tuesday night on King Field.

Wesson now has an 8-5 record and are 1-0 in region play after beating West Lincoln 7-0 Monday night in its division opener.

Tuesday, the Lady Cobras went up 1-0 on an Amya Williams goal. Williams dribbled into the box unmarked and put a ball past BHS goal keeper Maddie Brabham just 90 seconds into the match.

BHS (5-4) is coached by longtime leader Kevin Bower. Bower is in his 21st season coaching soccer at 443 East Monticello Street. Last season the Lady Panthers won their division and were knocked out of the playoffs in the first round by West Harrison. The team hasn’t lost a region match since the 2014-2015 season.

Senior Madi Miller is in her final campaign of being the main scoring threat for BHS. Tuesday, she tied the game at 1-1 with her first goal of the night.

Miller and Brabham are seniors for the Lady Panthers along with Tamarlyn Fells, Meg Foster, Hannah Junkin and Rile Whittington.

The tie would only hold for about five minutes as Williams scored a go-ahead goal for Wesson.

The Lady Cobras then went up 3-1 when freshman Marley Channell scored on a deft pass from Arie Douglas on a 2-on-1 situation. That score held at the break.

In the second half Wesson got a pair of goals from Natalie Bonds and Miller scored once more for BHS. Bonds (13), Williams (9) and Douglas (5) are the three-leading goal scorers for Wesson thus far this season.

That trio, along with Gabriela Flores and Abby Boleware, makes up the Wesson senior class. The Lady Cobras were 10-8 overall last season but missed the postseason after two straight playoff appearances in the previous years.

“I really like coaching this group of girls,” said Douglas. “Most of the underclassmen have experience playing together on the junior varsity team and they’ve really gelled quickly this season. They’re a fun group to be around.”

“We’re good as a team,” said Bonds. “We work well together and tonight we just came out and played our game.”

A big match later this month for Wesson will be a Dec. 19 visit from Franklin County. The Lady Bulldogs are defending region champs and haven’t lost a division match since the 2015-2016 season.

Brookhaven High will begin division play on Dec. 17 when the Lady Panthers play at Natchez High. The Lady Panthers had won their previous three matches over McComb, Lawrence County and Bogue Chitto before dropping their match to Wesson.

Caroline Kilpatrick and Morgan Moak had an assist each for BHS in the loss.