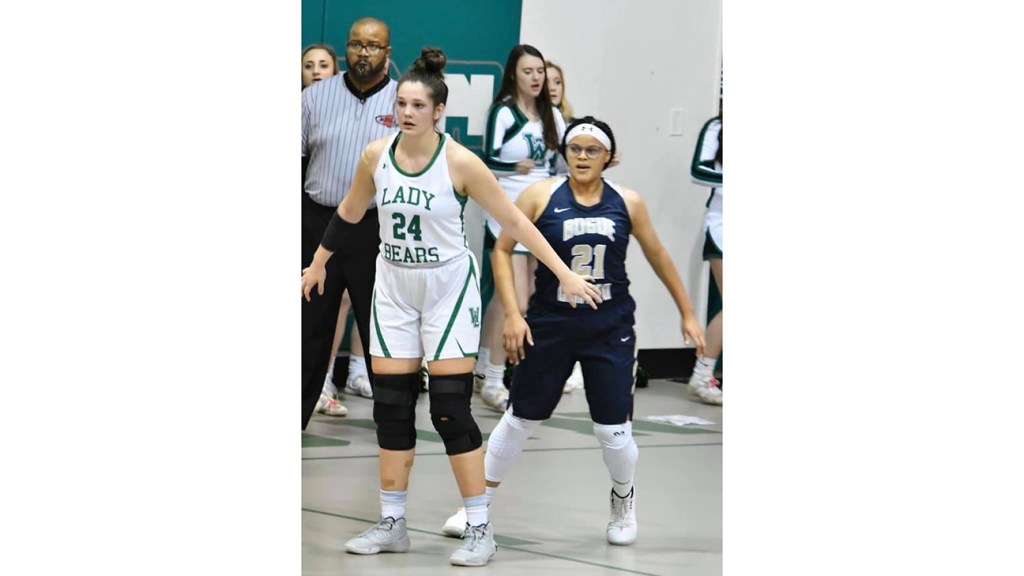 Photos by Stacy Leake West Lincoln senior forward Bailey Wilson and Anna Brumfield of Bogue Chitto watch the ball Thursday night in a matchup between the two schools at the Lincoln County Tournament.

West Lincoln, Loyd Star and Brookhaven Academy swept both the boys and girls games Thursday night in area high school basketball action. Here’s a roundup of how that happened.

At the Lincoln County Tournament hosted by West Lincoln, the Lady Bears picked up a 72-41 win over Bogue Chitto. In the boys’ game the Bears won 66-31 over the Bobcats.

Brittany Sturkey had the hot hand for the Lady Bears as she led the way with a 24-point effort. The junior forward also grabbed four rebounds and dished out four assists.

The Lady Bears are defending tournament champs and also got four point from Ta’kyla Brothern, two points from Mary Claire Johnson and one point apiece from Mya Brown and Ramsey Hall.

In the boys’ matchup the Bears got 22 points from junior Ty Brotherns. Seniors Karlton Byrd and Anthony “Peanut” Hughes chipped in 17 and 15 points respectively. Micahel Brothern had four points for the Bears while Spencer Maxwell and Chris Freeman scored two points each. Two points by Dylan Dickerson capped the WL scoring.

On Tuesday the Lady Bears were 48-44 winners over Loyd Star in their tournament opener while West Lincoln also beat the Hornets 65-53 in the boys’ matchup.

The Hornets bounced back from their Tuesday defeats to sweep Enterprise Thursday night. In the girls’ game the Lady Hornets were 57-37 winners and in boys’ action LS took home a 57-40 victory.

The Cougars swept a pair of games over Centreville Academy Thursday night. Coach Ron Kessler and his Lady Cougars pushed their record to 9-4 with a 51-34 win. Coach Josh Watts and his BA boys’ team beat the visiting Tigers 44-32.

BA plays at Bowling Green tonight in Franklinton, Louisiana. They play at Porter’s Chapel on Tuesday and at Parklane next Friday. The Cougars close the 2019 portion of their schedule on Dec.27 and 28 at the Copiah Academy Tournament.