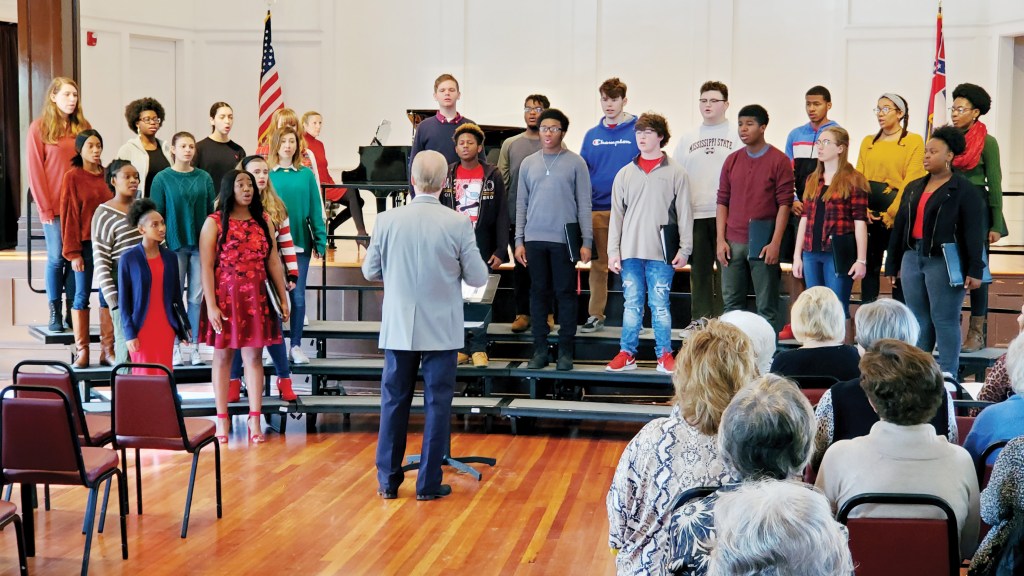 President Mrs. Edward Moak called the meeting to order and introduced Mrs. Ben Spearman who reported that she had most interesting club scrapbook from 1960-67. President Moak read a humorous poem about Thanksgiving and introduced the MSA choir and conductor Patten Rice and accompanist \Cindy Hunter.

The first part of the program began with the MSA Alma Mater, composed by Rice, followed by a selection of competition pieces. This section ended with the chorale surrounding the audience and singing a beautiful rendition of America the Beautiful.

The second part featured traditional Christmas carols presented with reverence and in exquisite harmony. The concert ended with a rousing rendition of Joy to the World which received a standing ovation from the club members. President Moak then adjourned the meeting and invited the students to enjoy the refreshments.

What are Christmas carols?

A dictionary definition is “traditional songs sung just before Christmas that celebrate the birth of Jesus Christ.”

What were some of the earliest Christmas carols?

It’s generally accepted that one of the first Christmas carols ever recorded was “Angels Hymn,” written in A.D. 129. One of the oldest printed carols is “Boar’s Head Carol,” dating from 1521 at Queen’s College, Oxford, England.

When did the first Christmas carol service take place?

Tradition holds that Edward White Benson — who later became Archbishop of Canterbury — held the first carol service in 1880 at his church in Truro, England.

When did people start “carolling”?

The notion of groups of carollers assembling in public spaces was a 19th-century one, according to Oxford. Called “waits,” these collections of singers would gather and perform for passersby, who traditionally thanked them with offerings of drinks or mince pies. It became known as wassailing and continues today, of course.

Several elements go into something seeming to sound unquestionably Christmassy, according to ClassicFM.com.

Melodies are sprinkled with minor and diminished chords in a stirring manner, such as in “God Rest Ye Merry Gentlemen.” Lyrics are nostalgic, whether sombre or uplifting, and the message is centered on Christ’s birth with a sense of awe, humility, hope and joy.

When was the first Christmas Eve carol service broadcast?

The Choir of King’s College in Cambridge, England, was broadcast singing carols on Dec. 24, 1928 — the first instance of a public caroling service.

What are the most popular Christmas carols?

The most popular carols each year are simply the ones people enjoy singing. Ask any random group of people what “the best” Christmas carol is, and you’re likely to get as many answers as there are answerers.

Brookhaven worship leader Carl Smith says three carols come to mind as his favorites. The first is “Come, Thou Long Expected Jesus,” because it reminds him of Christmas in his church when he was young.

He loves “O Holy Night,” because his mother sings it beautifully, he said. And “It Wasn’t His Child” by Skip Ewing is another favorite — because it is the story of Jesus from the viewpoint of Joseph.