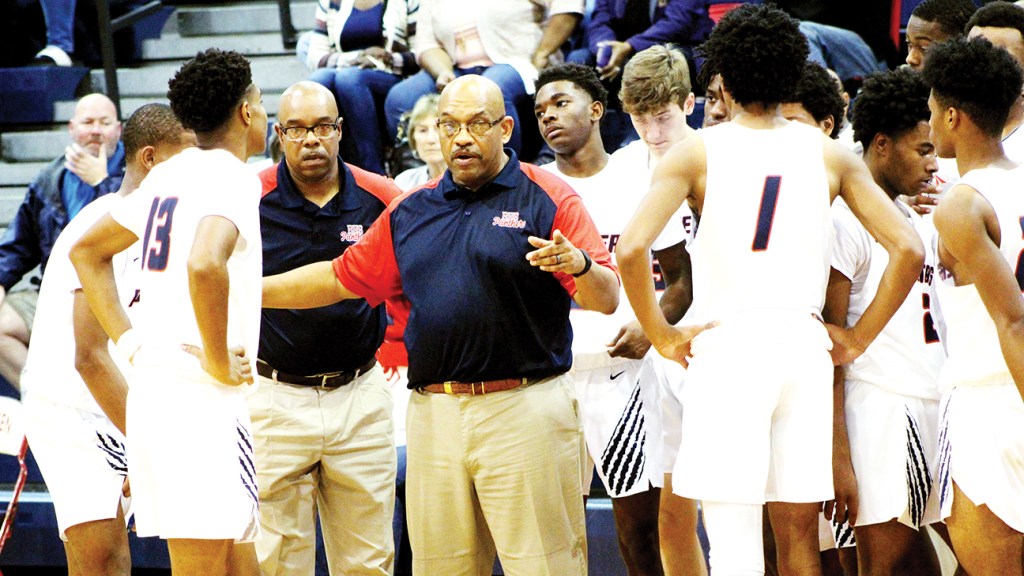 Photo by Cliff Furr Brookhaven High coach Marcus Flippin and his Panthers used a big fourth quarter Tuesday night to get past Tylertown. BHS trailed the Chiefs by 11 points at the start of the fourth quarter before mounting a comeback in a 61-60 win.

Here is a look at how area high school teams fared in basketball action Tuesday night.

Coach Marcus Flippin and his Brookhaven High Panthers (5-7) found themselves down 11 points at the start of the fourth quarter Tuesday night against Tylertown.

The Panthers would come roaring back to take a 61-60 win over the Chiefs in Sinclair Gymnasium. Junior guard La’Darius Thrasher led BHS with 22 points. BHS outscored THS 21-9 in the fourth quarter.

In the girls’ game the Lady Panthers cruised to a 70-41 win. The victory improved BHS to 11-1 on the season. Ole Brook hosts Lawrence County Friday in Sinclair with varsity girls beginning at 6 p.m.

Tied at 53 after four quarters Tuesday at Sacred Heart in Hattiesburg, the Loyd Star Lady Hornets outscored the home team by one-point in overtime to claim a 59-58 win.

In the boys’ contest, the Hornets (7-4) had no problem securing a 61-37 win. Four Hornets scored in double figures, led by 12 points from Will McCullough. Peyton Morse, Nathan Calcote and Reese DeHart all scored 11 points each for coach Seth Britt.

Loyd Star next plays Tuesday when they host Sacred Heart.

There were running clocks for most of the night in Warren County Tuesday, as the visiting Cougars of Brookhaven Academy crushed Porter’s Chapel.

In the girls’ game, the Lady Cougars (10-5) led 13-12 after one quarter before taking over to get a 67-17 victory. Anne Brantley Warren scored 17 to lead the Lady Cougars. Emma Gates chipped in eight points and Makayla Martin added seven points.

The boys’ game was much of the same as the Cougars (8-2) raced out to a 53-14 win. Eleven different Cougars scored, led by 14 points from Tyler Fortenberry.

BA travels to face Parklane Friday night. The Parklane girls beat BA 58-46 in overtime earlier this season. The BA boys took a 52-48 win over Parklane back on Nov. 25.

Back on Nov. 19 in the season opener for the Cobras, they were beaten 75-61 by the Bulldogs in Wesson.

Tuesday night, junior guard Larson Lewis was the man with the hot-hand as he drained seven 3-pointers on the way to scoring a career-high 33 points. Seniors Kenner Bizot and Darrian Gibson chipped in 17 and 15 points, respectively, for coach Rusty Newman.

The Lady Bulldogs took a 62-41 win that broke a five-game winning streak for the Lady Cobras (5-4) and coach Michelle Nunnery.

Wesson travels to Richland on Friday.

The Puckett Wolves came into Jack Case Gymnasium Tuesday night and swept a pair of games from the Bears.

The Lady Wolves (9-1) are one of the best 2A teams in the state and have a Southern Miss signee in point guard Rose Warren. Tuesday, the Lady Bears (3-5) fell 65-55 after previously getting knocked off 62-55 on Nov. 12 by the Lady Wolves.

Tuesday, the Lady Bears cut the lead to 55-53 with two minutes left before the Lady Wolves knocked down free throws late to secure the win.

“I thought we played with great effort overall,” said WL coach Brooks Smith. “The little things (missed shots at the goal, seven missed free throws and 19 turnovers) added up to cost us big.”

In that first meeting, the West Lincoln boys (6-2) took a 65-43 win over the Wolves in Rankin County. Tuesday, the visitors from Puckett got a measure of revenge when they beat WL 55-35.

WL got 22 points from Karlton Byrd to lead them.

“Puckett came ready to play,” said Smith. “We didn’t do much of anything to make them uncomfortable. They out-hustled us all night. I hope we’ve learned a lesson on being ready to play against anyone.”

The Yellowjackets were swept in a pair of games Tuesday night at West Marion.

Coach Pat Bridges and his Cougars (7-2) won their third-straight game with a 73-50 spanking of the Tigers. LC had not played since Nov. 26, when they beat Wayne County 47-44 in the second day of their Thanksgiving tournament in Monticello.