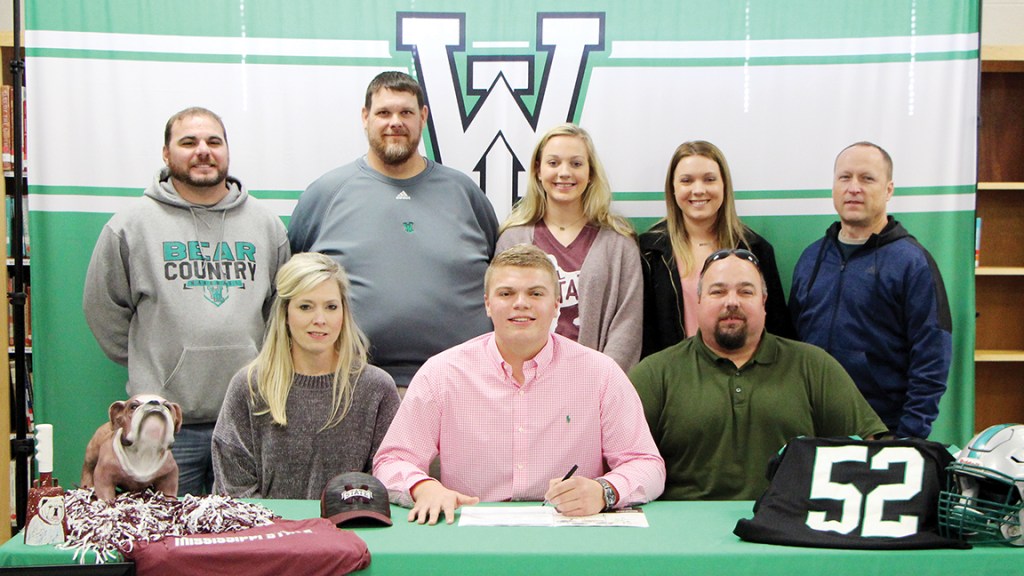 West Lincoln senior Grant Jackson became the first of his kind Wednesday when he put pen to paper and signed an official letter-of-intent with the Mississippi State football program.

Jackson is the first Division I signee in West Lincoln history as the school just began playing football a little over 20 years ago.

At 6-foot-6, 325-pounds it’s also safe to say the offensive tackle is the biggest Bear to suit up for the green and white during that time.

Since giving State his verbal pledge in the spring Jackson has long said that Starkville felt like home. He’ll still be at West Lincoln in this upcoming spring — Jackson won’t early enroll at State — but he still can’t wait to get to his new home when the first summer term begins.

Building offensive line depth is a need for the Bulldogs as it is for every SEC program. They added 6-foot-5, 305 offensive tackle Calvin McMillian from Houston (MS) High on Wednesday and have others targeted for the February signing date.

West Lincoln coach Brad Bland says that Jackson isn’t just another big body, he has tools that the coaches in Starkville can build on.

“Of course, the first thing you notice about him is his size and build,” said Bland. “But he also has good feet and moves well for someone so big. Grant is the type of players who is always looking for ways to better himself. He has the drive and determination to make himself better. If it takes extra reps in the weight room or staying after practice to flip tires, he’s going to do whatever it takes.”

The signing class for State was ranked as the 25th best in the nation as of press time.