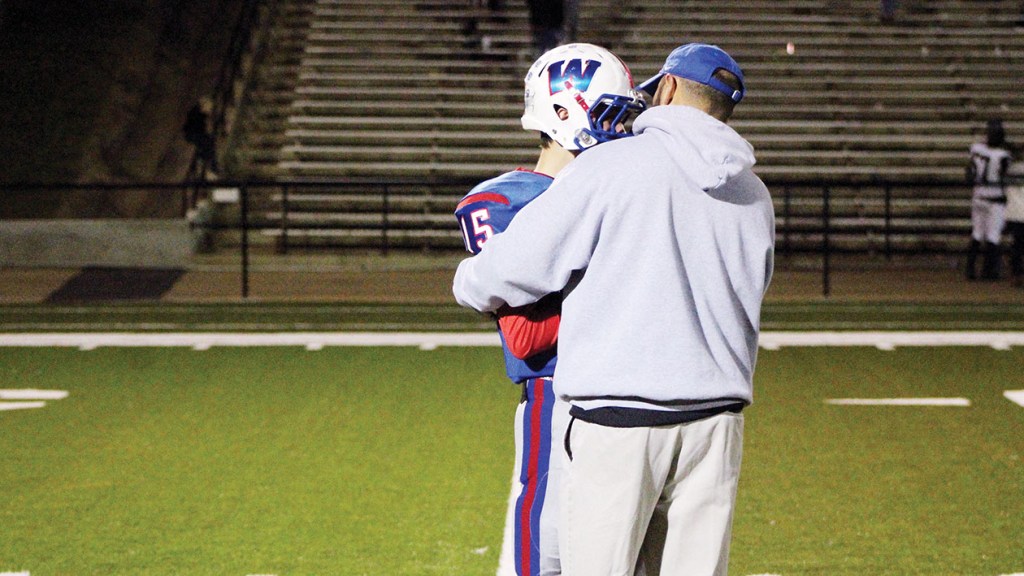 Photo by Cliff Furr Wesson coach Jeremy Loy spends extra time with his son Will on the field after the Cobras were eliminated from the MHSAA 2A playoffs this season. The scene on a high school football field after a game, especially a season ending loss, can be both a happy and cruel occasion depending on the outcome.

Have you ever had something in your life that once intimidated you, but you then grew to love?

As a college freshman I was always so nervous to talk to coaches after their games finished. That year I mostly wrote about Brookhaven Academy football and I quickly built a rapport with coach Ray Ishee. I would wait in his office and after he addressed the team, Ishee would give me a run-down of how he thought his group played.

Longtime Daily Leader sports editor Tom Goetz called me one week and asked if I’d like to make a little extra money for an upcoming game. The Vicksburg Post wanted a story from when the Cougars played Porter’s Chapel and they’d pay me for it. All they asked was that I spoke to their coach for the article.

I can remember standing outside their huddle, waiting for their coach to finish up talking to his players on the field after the game and being nervous as a cat. I was used to talking to Ishee only and I don’t remember the name of the coach for PCA, but he was kind to a jittery college kid and the interaction helped build my confidence for the future.

Now that moment after a game, especially football games, has become my favorite. There’s nothing like talking to a winning football coach on the field — especially after a big game.

As we wrap up our football coverage tomorrow with the revealing of the Daily Leader 2019 All-Area team, I think back on some of the best postgame moments from this season.

Moments such as Bogue Chitto coach Gareth Sartin surrounded by a bouncing bunch of Bobcats on Perry Miller Field after his team had just beaten West Lincoln in a rivalry game. Many times, coaches want their players on a knee, so they can stand over them and be heard in their wrap-up speech.

That night Sartin was happy to let his boys surround him with their energy and excitement as he congratulated them on the win.

The final huddle — the one after a season ending loss — is always hard, whether the season ends with a playoff defeat or a winless record.

I can’t remember where I read or heard this, but someone smarter than me was describing the finality of football ending for a young man.

Former baseball players or basketball players can live vicariously through church league games for their sport. For most who play football though, when they lose the final game of their senior year and take those shoulders pads off on the field — they’ll never get to experience that again.

I think the same can probably be said for many members of the band or the cheer squad.

Jeremy Loy is the kind of guy that would cut off a pinky to play one more high school football game. Now he gets to live it again through the play of his son Will, a freshman quarterback for Loy’s Wesson team.

The Cobras went down fighting in a second-round playoff game, a 6-0 loss to Enterprise-Clarke — it was one of the best games I watched all season.

The elder Loy presided over his team in the postgame huddle. Pulled them in tight and told them how proud he was of them. Told them that they’d had opportunities, fought their tails off and had nothing to hang their heads about.

Loy then found his son and spent a long time in conversation with his boy. Will had been sick that week. On the way into the field house at halftime I watched him pull his helmet off and let out the kind of cough you feel in the bottom of your toes.

He’d literally left it all on the field and his Daddy wanted him to know how proud he was of him. He was telling his son that the plays that were make-or-break for the team, those mistakes came back to him — the father and play caller — not the son.

I watched that from a respectful distance and didn’t feel nervous to talk to my friend Jeremy after that moment — I felt honored.

Sometimes coaches on the field are at a true loss for words.

It was just after 10 p.m. on a Friday night in September. BA sophomore quarterback Tyler Fortenberry had just flipped into the end zone to give the Cougars a win over Cathedral on the final play of the game.

The referees just raced off the field as boos rained down from the Cathedral fans. The Green Wave’s coach was stomping around at midfield, his face redder than a truckload of tomatoes.

The final play had happened on the opposite side of the BA sideline.

Cougar coach Ron Rushing had his hat off and was rubbing his head. He wasn’t really sure what had happened. He knew the play he called and saw Fortenberry take off. He wasn’t sure that he’d gotten in until the officials concurred and ruled the score good.

“I’ll have to look at the film,” a grinning Rushing said to me. “I’m not sure what all happened.”

I felt just as befuddled, wondering how I was going to get the sports section together with a deadline that was an hour away. How would I have time to give the game and play the justice it deserved?

That’s really what this job is all about for me — giving the area high school student-athletes and coaches the justice they deserve. The All-Area team wouldn’t be possible if not for the help of some key people who help me wrangle pictures of the players.

Football players have their head covered in plastic when they compete. I always feel they deserve to have their face in the paper — sans helmet — for this honor.

Brian Emory, April Clopton, Stacy Leake, Mandy Bayless, Candace Sandifer, Sherry Davis, Courtney Myers and Lisa Smith are the people that help make that happen at each of the eight area schools we cover. Many thanks for their unequaled help.

Thanks to our readers, subscribers and Lifestyle Editor Brett Campbell who designs and lays the page out.

And don’t fret, football fans, we’re only 244 days away from having happy football coaches to interview on the field again.