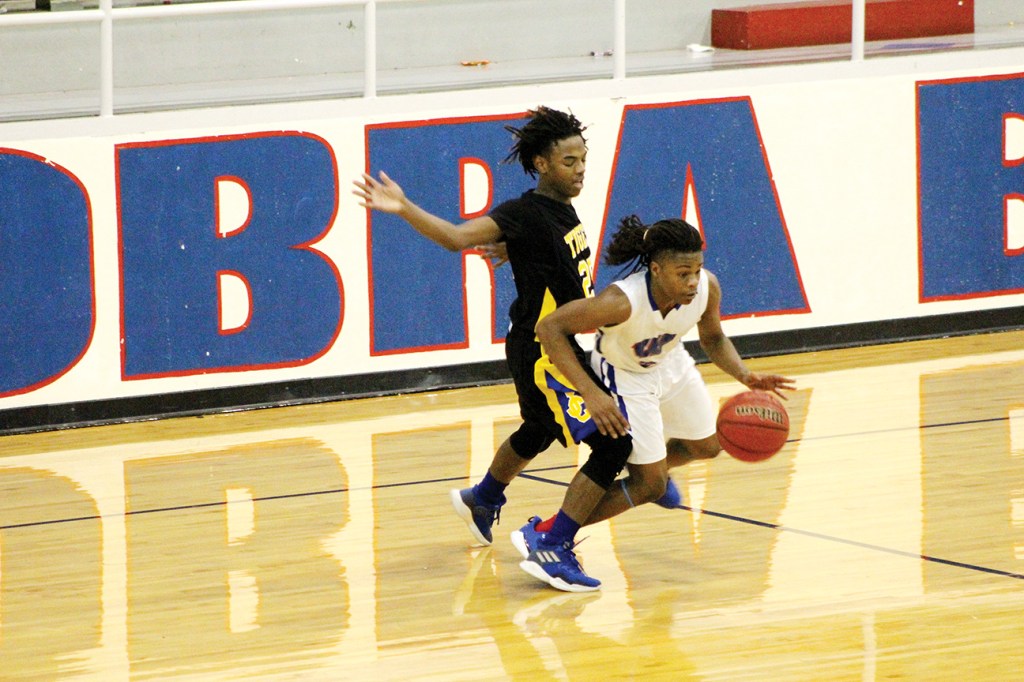 Photo by Cliff Furr Senior guard Damien Smith dribbles away from an aggressive Jefferson County defender Friday night. Smith and the Cobras travel to Forest Friday night for their final non-region game of the season.

“We came to play ball tonight,” shouted a Wesson fan as the Cobras scrambled on defense and scored a layup off a Jefferson County turnover Friday night in the Snake Pit.

The Cobras (5-7) were locked in from the tip as they used a strong third quarter to pull away for a 41-23 win over Jefferson County in their Holiday Shootout.

JC led 12-10 at halftime as the first two quarters were a bit shorter than usual. With the girl’s game delayed by an injury and Jefferson County slated to play the first game of the day on Saturday morning, the teams played two six-minute quarters before reverting back to the standard eight minutes in the second half.

That worked out well for Wesson coach Rusty Newman, who was a bit short handed with Larson Lewis and Will Loy both out with church-based absences. Lewis had scored 19 in the first meeting between the two teams on Dec. 3 — a 55-38 Wesson win.

Friday night, it was senior forward Kenner Bizot who scored 19 to lead the Wesson offense. The 6-foot-4 Bizot ran the floor for easy layups and dominated the Jefferson County interior with offensive put backs.

The duo of senior Damien Smith and junior Antrelle Sims were two of the best defensive backs in Region 7-2A during football season.

The pair looked that part in the third quarter as they flew around defensively — snatching passes out of the air like interceptions — while Wesson was turning up the pressure.

“With us having a couple guys out, I was OK with keeping it slow in the first and half and playing zone,” said Newman. “We had a really good run in the third quarter that put us out front.”

Wesson started the second half on a 15-0 run as they outscored the Tigers 19-2 in the third quarter.

Point-forward Darrian Gibson is the other senior on the roster along with Smitha and Bizot. Gibson scored 11 and was strong handling the ball late as Jefferson County extended their defensive pressure. Smith scored nine points while Sims and Collin McGowen added one piece each.

Last season Wesson was red-hot in their pre-Christmas schedule as they posted a 15-2 record during that time. The Cobras finished 19-10 in a tough 3A region and lost their two leading scorers to graduation in guards JD Allen and Shemar Dickerson.

Allen averaged 21 points per game and Dickerson added over 12 points per night. Both players now suit up for the Copiah-Lincoln Wolves.

Newman has been coaching long enough to know you don’t replace offensive production like that with a snap of your fingers — it takes work.

“We’re still figuring it all out, but I like the progress we’ve been making,” said Newman. “Kenner really ran the floor well tonight and that puts pressure on a defense to keep up. Damien and Darrian handled the ball well. Antrelle was active on defense and Nick Edwards came off the bench and gave us some good minutes too.”

Saturday, the Cobras dropped a 47-41 loss to Crystal Springs. They’ll play at 3A Forest on Friday before traveling to Bogue Chitto Jan. 7 and Amite County Jan. 10.

Amite County is under new leadership as first year coach Warren Hargrove has the Trojans with a 9-3 record at the Christmas break. AC beat Jefferson County 73-37 Dec. 6.