Counting down the best sports stories of 2019 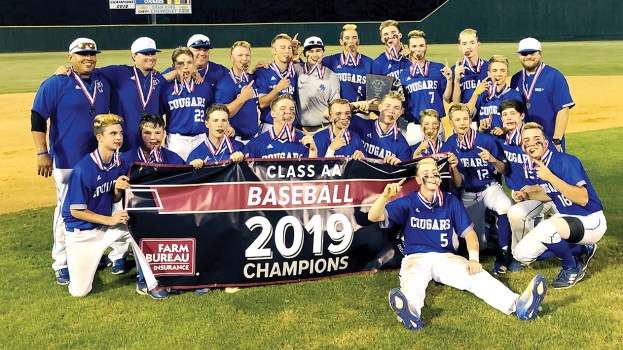 Daily Leader file photo The Brookhaven Academy Cougars celebrate on the field at Williams-Gillis Ballpark after beating Tri-County Academy 8-7 in the deciding game of the MAIS AA state championship series. The win gave BA a second straight state title after they swept Tri-County for the title in the previous year as well. 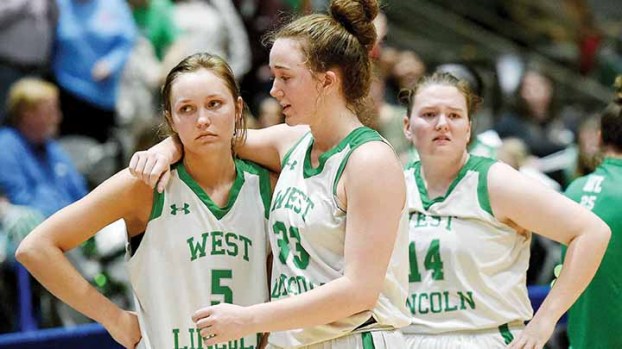 Daily Leader file photo Katelyn Dickerson of West Lincoln puts her arm around teammate Skyler Hall as the Lady Bears drop a tough 39-33 loss to Newton High in the MHSAA 2A state championship.

It’s that time of year again as the calendar flips to a new year and we take a look back at the top local stories from the past 365 days. Here are the first five with part two coming on Friday.

Everyone who knew anything about the local 2A girls’ basketball division — Region 7-2A — knew that the West Lincoln girls were the favorites entering the 2018-2019 season.

The Lady Bears in green and white had six seniors, four of which started. They had the shooting of Skylar Hall, the passing of Megan Gerald, the height of Bailey Wilson, the instant offense off the bench of Brittany Sturkey, the hustle of Elizabeth Stogner and the smooth scoring ability of Katelyn Dickerson.

They were such a veteran group that coach Brooks Smith knew that his job of leading might be the easiest of his career.

The Lady Bears (26-6) won the County Tournament and then went through the division slate with just one loss. They cruised to the region tournament title on their home court in unexpected fashion after the tournament was moved from Amite County at the last minute due to issues with their court.

WL then won three straight games on their home court of Jack Case Gymnasium to qualify for the state tournament in the Mississippi Coliseum.

Facing a 30-1 Calhoun City team in the semifinals the Lady Bears got 17 points from Sturkey, 14 from Dickerson and 11 from Stogner in a huge 53-50 win.

They then played a 28-2 Newton team in the championship game. The Lady Tigers jumped up 10-4 after the first quarter and no matter how hard the Lady Bears battled, they were never able to wrestle the lead away from Newton in a 39-33 loss.

Playing in front of a sea of white and green wearing supporters, there were tears afterwards on the West Lincoln bench — but Smith and his bunch held their heads high as they knew they’d given everything they had throughout an unforgettable season.

It’s not just that Brookhaven Academy won the MAIS AA state championship for a second straight season in 2019.

The story is how the Cougars did it. Trailing Tri-County in the final half inning of game two of the state championship series — BA was three outs away from having to play a deciding game three.

However just like they did so many times during the season — the Cougars (21-9) never gave up.

A Nick Ogden double scored Brady Spring in the bottom of the seventh inning to give BA an 8-7 win over the visiting Rebels.

Coach Tyler Parvin and his team were accustomed to playing the role of comeback kids. They won eight times by one run. Nine times the Cougars won game that were tied or that they trailed in the final inning.

It was a fitting finish for coach Tyler Parvin who stepped down after the season to take a job at Jackson Academy.

After winning a title in 2018 with a heavily favored team, Parvin pushed the right buttons and coaxed a state championship out of an unforgettable group of Cougars.

Lady Wolves make postseason run in year one under Howard

There were high expectations when Meleah Howard took over the Copiah-Lincoln softball program in the summer of 2018.

Decorated as a player during her time at CLCC, Howard had won big on the high school level at her previous stops at East Webster and Lawrence County.

Howard and her team came out of the gate hot as they won 11 straight games to start the season. The Lady Wolves finished the season with a 31-17 record as they saw their season end with a loss to Itawamba in the NJCAA Region XXIII semifinals.

The program also slayed a major dragon during their run in the state tournament as they beat defending national champs Jones College for the first time since 2011.

Howard is also a determined recruiter and has inked strong recruiting classes that are built around keeping local talent in Wesson. Expectations are high for her 2020 edition that will hit the field in the early spring.

Britt won her third straight title with a time of 20 minutes and 16 seconds at Choctaw Trails in Clinton. She was 28 seconds ahead of her closest competition.

Castillo was a runner-up as a sophomore and he worked to improve throughout his junior season. He gritted out a four second victory over a runner from the Mississippi School of Math and Science.

Both the West Lincoln program led by Greg Allen and the Loyd Star team coached by Michelle Case are fairly young compared to other schools in the state that have been competing at cross-country for a number of years.

Both schools have made names for themselves in a short amount of time and let the rest of the state know that Lincoln County is a place where cross-country champions are made.

Wesson runs through Region 7-2A in dominating fashion

When it was announced that Wesson was dropping down to the 2A classification, one could assume that the Cobras would be favorites in Region 7-2A after playing as a 3A school for the last six seasons.

Wesson stepped into the local 2A division this season and were unstoppable as they marched through region play.

The Cobras won their five region games by a combined margin of 241-28.

No freshman in the state of Mississippi threw for more yards than Cobra QB Will Loy and his 2,495 passing yards. Loy was third among 2A quarterbacks as he threw for 25 scores in just 10 starts.

Junior wide receiver Antrelle Sims began the year as a quarterback and was Loy’s favorite target once he assumed the role of starter. Sims was a MAC All-State selection and finished 11th in the state in receiving yards with 1,085.

Coach Jeremy Loy and his Cobras (8-5) lost 6-0 to Enterprise-Clarke in a second-round playoff slugfest. The Cobras will head into next season as favorites again in 2020 as they only had five seniors on their 39-man roster this season.