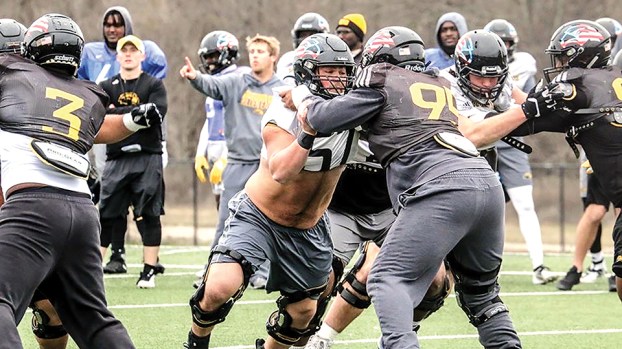 Photo by USM Sports Information Sophomore center Trace Clopton holds up a defender during drills this week during bowl practice in Ft. Worth. Clopton, Coker Wright and the Eagles take on Tulane at 10:30 p.m. today in the Armed Forces Bowl. 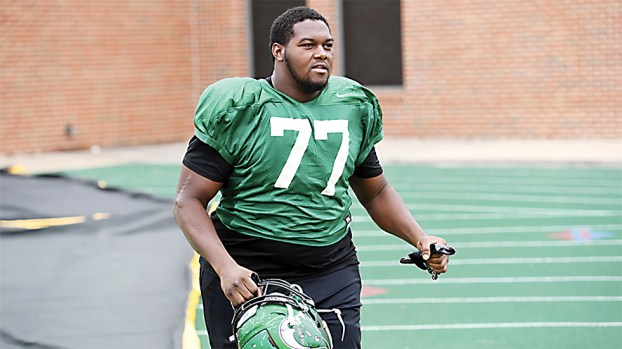 Photo by Tulane Sports Information Tulane defensive lineman and BHS alum Jeffery Johnson will face off against two of his high school teammates in Clopton and Wright when the Green Wave play USM today in the Armed Forces Bowl. Tulane is a touchdown favorite in the game. 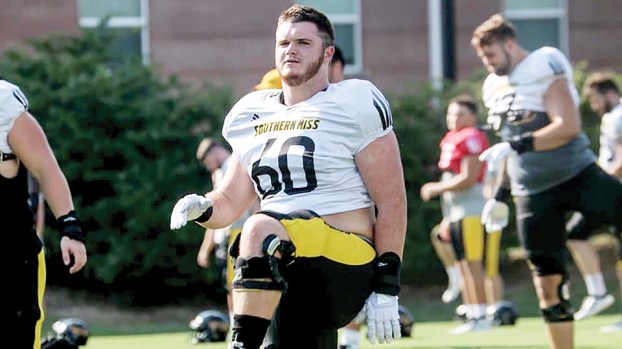 Brookhaven High, Southern Miss and Tulane fans alike will be locked in to ESPN today at 10:30 a.m. when the Golden Eagles take on the Green Wave in the Lockheed Armed Forces Bowl.

The game in Ft. Worth, Texas, will have three former Brookhaven High school teammates competing against each other in sophomores Jeffery Johnson and Trace Clopton and freshman Coker Wright.

The 6-foot-3, 320-pound Johnson is a huge presence in the middle of the Tulane defensive line as a nose tackle.

In 10 games this season, Johnson has 22 tackles including 1.5 sacks. The massive Johnson has also recovered a fumble for coach Willie Fritz.

The Green Wave currently sits 6-6 and have dropped three in a row coming into the bowl game with losses to Temple (8-5), Central Florida (10-3) and SMU (10-3) to close out their regular season.

It’s the second straight bowl berth for Tulane, only the second time in program history that the Green Wave has made back-to-back bowl games.

Tulane is strong on the ground as the team averages 249.8 rushing yards per game this season.

Johnson played in every game for Tulane as a freshman last season. The Green Wave defeated Louisiana-Lafayette 41-24 in the Cure Bowl to cap their 2018 season.

He was heavily recruited as a senior for coach Tommy Clopton at Brookhaven High School. Johnson was a four-star prospect that made 67 tackles, seven sacks and three forced fumbles for a 11-2 Ole Brook team his senior season.

This morning, Johnson will have one of his best friends and former teammates trying to keep him away from Southern Miss ball carriers in USM starting center Trace Clopton.

The 6-foot-2, 290-pound Clopton has been starting in the center position since stepping foot on the Hattiesburg campus as an early enrollee.

He was a freshman All-American last season and a member of the Conference USA All-Freshman team.

Clopton was a three-star prospect coming off of a BHS career that saw him playing for his father Tommy. He, Johnson, and former Panther J.J. Jones teamed up to give Mississippi a win in the 2017 Mississippi-Alabama All-Star game.

A year after coming to Brookhaven and getting Clopton, the Eagles also hauled in Wright to join the team.

The 6-foot-4, 275-pound Wright has been a jack-of-all trades on the USM offensive line as a true freshman. He came off the bench against Alcorn in the opener and then started against Mississippi State before suffering a lower leg injury.

On game days he’s usually shadowing offensive line coach Ryan Stanhek on the sideline. Wright can play any position on the line and sees time at wherever he’s needed most on the front. He was a Conference USA All-freshman selection this season.

Last season as a high school senior, Wright played defensive end for coach Tucker Peavey and the Panthers. Like Clopton and Johnson before him, Wright was a first team 5A All-State selection as a senior.

The Eagles are 7-5 under fourth-year head coach Jay Hopson. The team was 6-5 last season but did not receive a bowl invitation. The school was 7-6 in his first season with a New Orleans Bowl win over Louisiana-Lafayette. The next year, the Eagles were 8-5 and lost to Florida State in the Independence Bowl.

USM is on a two-game skid after dropping the final two regular season games to Western Kentucky (9-4) and Florida Atlantic (11-3).

Southern Miss holds a 23-7 series lead over Tulane. The schools were once division rivals as both joined Conference USA when the league started playing football in 1996. Tulane left the C-USA for the Big East/American Athletic Conference in 2012.

While Tulane comes in with a strong rushing attack, the USM defense is top-15 in rushing yards allowed per game.

Most pundits have Tulane as a touchdown favorite over the Golden Eagles when the game kicks from Amos G. Carter Stadium on the campus of Texas Christian University at 10:30 a.m. on ESPN.