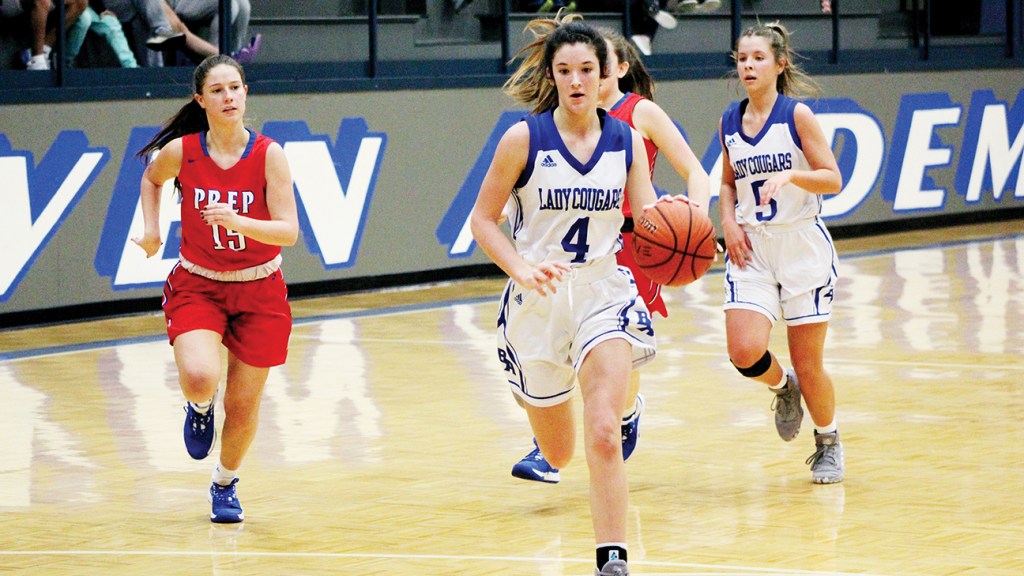 In the girls’ game, junior Olivia Sasser came off a screen and perfectly stepped into a 3-pointer with 5.3 seconds left in a tie game. A BA turnover and two made free throws then gave JP a 38-33 win.

Coach Josh Watts and his boys led 33-24 after three quarters and would survive a frantic Prep comeback attempt in the final four minutes to hang to a 49-45 win.

Saturday, the Lady Cougars began the game shaky offensively, but much of that credit belongs to the Prep defense.

McAnnally was a state champion winning coach at East Rankin and his team sags defensively and rotates to cut off any drives to the basket.

The Lady Patriots also had good length and that gave them a boost in offensive rebounding.

“We did a better job later in the game of blocking out and keeping them off the offensive boards,” said Kessler. “That’s something we did well the night before against Presbyterian Christian. It’s been something we’ve struggled with all season and lately we’ve been better, but tonight we took a step back in that area.”

A 5-0 offensive spurt by BA sophomore Madison Moak cut into that lead late in the third quarter. Moak drained a 3-pointer and then made a steal and drove in for a layup as the JP lead was cut to 30-26 heading into the final quarter.

The BA defense was strong over the next two minutes, but offensively they had three empty possessions with no shot attempt.

Sophomore point guard Anne Brantley Warren drove into the lane with 24.6 seconds left and drew a foul. Warren knocked down the free-shots to tie the game at 33-33 and set up Sasser’s go-ahead basket — she led JP with 14 points.

BA beat Presbyterian Christian 49-24 the night before at home. In their second game at the Copiah tournament, the Cougars beat Parklane 57-51 in overtime. Parklane had previously beaten BA twice this season.

District 4-4A play begins on Friday for BA at Oak Forest Academy. The Lady Yellow Jackets have a 6-foot-2 forward in LSU softball signee Emilee Casanova.

The trip to face Oak Forrest will be a big one for the BA boys as coach Josh Watts says OFA is one of the better teams in the division.

In a change from how things have been done in the past, BA won’t play a district tournament. The top four schools in the district will be seeded in the south state tournament based on how they finish in the regular season.

“In years past when we’ve been more experienced, I probably wouldn’t have minded skipping a district tournament,” said Watts. “This year we’re young though and we’re going to start with a tough one Friday that we need to win.”

That lack of experience reared its head late as the Cougars struggled to close out what looked like a sure win.

The Cougars led 47-38 with 55 seconds left but Prep jumped into a pressure defense and knocked down a pair of 3-pointers. They stole an inbound pass with 30 seconds left after cutting the lead to five but couldn’t convert to get closer.

Watts says his team was able to get some rebounds late — despite being outrebounded 24-17 by the Patriots — that helped seal the victory.

“Trey and Dylan Fortenberry got us some tough rebounds in the final minute that were the difference in winning and losing,” said Watts. “Last night against Presbyterian the same thing happened to us when they turned the pressure up and they got six offensive rebounds in the fourth quarter. Tonight, we were better in that area.”

BA led Presbyterian by 12 early the night before, but the visitors from Hattiesburg roared back for a 55-50 win.

The loss broke a seven-game win streak as BA moved to 15-3 with the win over Prep.

The Patriots (11-4) are coached by former longtime Millsaps head coach Tim Wise. They may not be as a talented as some of the great Prep teams of the past, but they can run approximately 1,000 different half-court plays.

The Patriots couldn’t do much with Brookhaven Academy sophomore forward Tyler Fortenberry. He scored a team high 23 points on a variety of drives and cuts to the basket.

Dylan Fortenberry scored 22 against PCS on Friday as the junior transfer has begun to heat up from deep of late.

“Dylan and Gavin are shooting the ball well and that’s giving our guys inside more room to operate,” said Watts.

Besides Centreville and Oak Forest this week, the Cougars will host St. Thomas More (boys only) from Lafayette, Louisiana, on Saturday.

The Cougars from St. Thomas More are three-time LHSAA state champions and are coached by a hall of famer in Danny Broussard. They’ll stop and play BA Saturday after playing at Madison Ridgeland Academy Friday night. A junior varsity game will begin at 2 p.m. with the varsity game to follow.