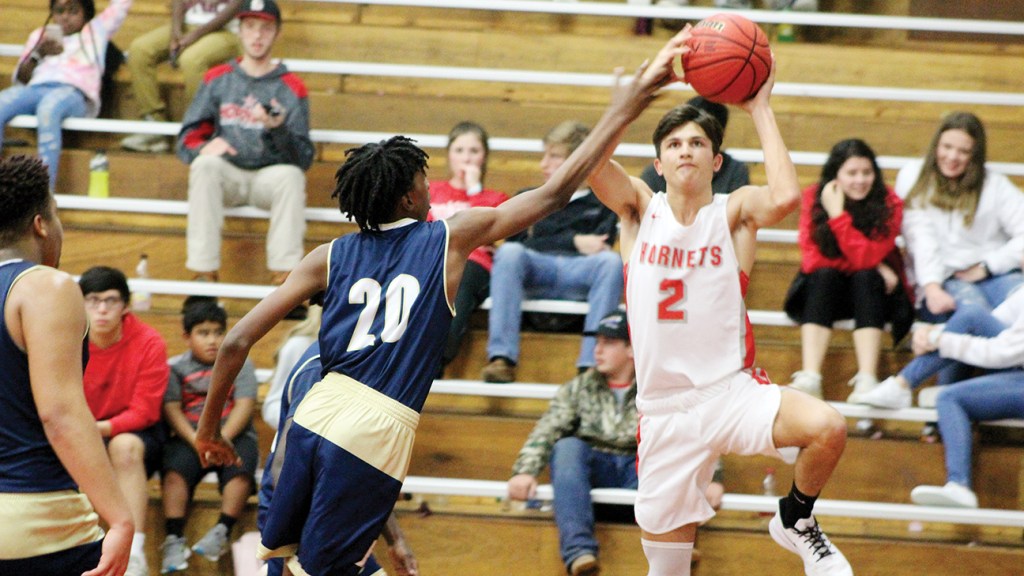 Photo by Cliff Furr Loyd Star senior guard Reese DeHart goes up for a shot over the outstretched arm of Franklin County’s Daylan Thomas. Loyd Star is back at home tonight hosting West Lincoln in the Region 7-2A opener for both schools.

Both the boys’ and girls’ games Friday at Loyd Star went down in comparable fashion. Both opened with the game being close as Loyd Star kept the pace at a manageable level and therefore the score was tight.

However, Franklin County was able to speed things up as the Lady Bulldogs used a big third quarter to take a 51-41 win over the Lady Hornets. In the boys’ game, it was the second quarter that was the undoing of the home team as FC took that game 68-46.

It was also a pair of players wearing No. 1 that did most of the damage for Franklin County in both games. Sophomore point guard Ja’Sherreah Hunt scored 28 to lead the Lady Dogs and senior guard Ma’kyilan Covington led the boys’ team with 22 points in their win.

“We didn’t play very well,” said Lady Hornets coach Gene “Moochie” Britt. “We missed too many shots and had too many turnovers. We’ve got to play harder than we did tonight.”

The Lady Hornets (9-5) had one positive as sophomore point guard Aubrey Britt returned to the court for the first time since hitting her head playing against Bogue Chitto in the county tournament Dec. 6. Britt finished with a team-high 13 points, five rebounds and four assists.

The Lady Hornets got the game started with a 3-pointer by Tamaria Townsend and with three minutes left until halftime they tied the game at 17 on a Carly Beth Wallace basket.

The flashy Hunt would take over, though, as she scored seven straight including a long 3-pointer as her team led 24-18 at halftime. Hunt scored 11 of her team’s 17 points in the second quarter.

The second half saw the Lady Hornets keep things close, but FC had an answer for every bucket as they kept the lead near double digits throughout the final 16 minutes.

In the boys’ game, Covington was a one-man wrecking crew in the second quarter as he went off and scored 20 points in the eight-minute period.

Loyd Star (8-6) senior guard Stephen Mills knocked down a 3-pointer on the first play of the second quarter to put his team up 11-10. A Reese DeHart 3-pointer later in the quarter put LS up 17-15, but the Hornets would never lead again.

“They took us out of it in the second quarter and we never recovered,” said Britt. “We were slow on defensive rotations and their No. 1 hit some big shots.”

Loyd Star next steps into region play Tuesday night when they host West Lincoln. The West Lincoln boys have dropped six in a row after winning the county tournament. They lost 66-29 to Simpson Academy Saturday and 57-46 to Madison-St. Joe on Friday.