BHS opens Region 5-5A play with sweep of West Jones 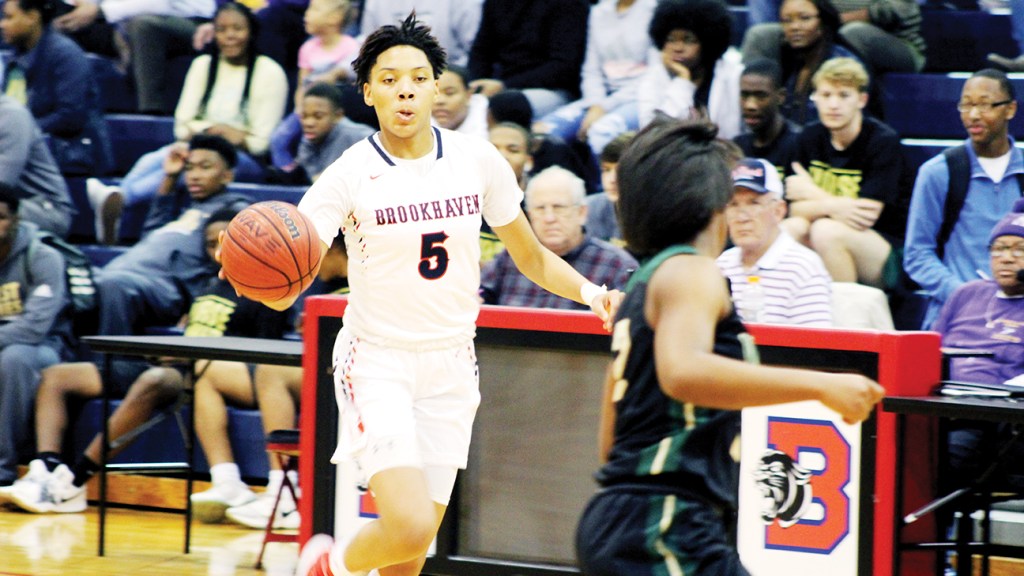 Last season, Brookhaven High and West Jones met twice in the playoffs, with the BHS boys’ eliminating West Jones in the first round and the Lady Mustangs returning the favor to the Lady Panthers in the third round.

Tuesday night, the teams began Region 5-5A play and heralded in two years of being in the same division along with South Jones and Laurel. In their first region matchup it was BHS who looked, played and shot like a team confident on their home court as they swept a pair of games from the Mustangs.

In the girls’ game, the Lady Panthers twice built big leads as they eventually cruised to an 80-65 victory. The boys’ game got tight late, but coach Marcus Flippin saw his team make the plays necessary to grind out a 65-60 win.

Cook roasts WJ with her 3-ball

Much like they did in their playoff matchup last season, BHS came out hot in the girls’ game as they quickly jumped up double digits on West Jones.

The Lady Mustangs (10-5) and coach Sharon Murray didn’t panic though, as they’re more than comfortable playing at a quickened pace.

Early in the second quarter BHS senior and Ole Miss signee Snudda Collins went to the bench with two fouls and the Ole Brook lead evaporated.

West Jones took 35-34 lead late in the quarter and it looked like they had seized momentum heading into half.

On the final offensive possession of the half, BHS senior Lulu Cook buried a corner 3-pointer just before the horn to give BHS a 40-39 lead at the break — the shot would be a harbinger of things to come from Cook in the second half.

Cook hit her first 3-pointer of the second half to put BHS up 51-43 midway through the third quarter. And on the next trip the ball found Cook in the corner alone and she splashed through another deep shot.

And then Cook did it again — hitting her third straight 3-pointer to put BHS up 57-44 and sending the Panther student section into a frenzy.

The Lady Mustangs wouldn’t threaten again as Collins and point guard Ashanti Louis gashed them with drives to the basket and in the fourth quarter those two and senior guard Ayanna McNairy combined to run over two minutes off the clock with a stall offense.

“Our bench gave us a great lift tonight,” said BHS head coach Preston Wilson. “Angel, Genesis, Jayla and Kyja were all active on defense and gave us a boost.”

West Jones was unbeaten last year before losing to Olive Branch in the state semifinals and they lost five seniors including four of their five leading scorers from that team.

What they did return this season was senior guard Brikayla Gray. Gray is superb athlete who possess both strength and quickness — a Southern Miss signee, she led all scorers with 34 points Tuesday.

“We did a better job of helping on her drives to the basket in the second half,” said Wilson. “She’s tough to slow down regardless.”

Cook says the Lady Panthers (17-3) were locked in and focused as their coach made sure to eliminate distractions before the game.

“When we came in the gym to start getting ready coach locked our phones up in his office,” said Cook. “He didn’t want us thinking about anything but the game and that’s what we did.”

Panthers get team win over WJ

With second leading scorer Jermario Hersey in street clothes on the bench due to a lower leg injury and leading scorer La’Darius Thrasher scoring only three points — 15 below his average — one would think that Panthers would have been in trouble against West Jones.

That wasn’t the case though, as senior Jontavius Wilkerson stepped up to sore 19 points and fellow senior Piedro Wilson added 12 to lead the Panther offense.

The Panthers (8-11) hit nine 3-pointers in the game and used the long-ball to build some separation in the third quarter.

The game began sloppily for both teams as neither scored for the first three minutes of the first quarter.

In the third quarter, BHS moved the ball around the perimeter and shot it with confidence on the goal in front of their bench.

Sophomore Daetyn Davis hit two 3-pointers in the period, Wilkerson hit one, and Wilson another as BHS outscored WJ 20-11 in the third quarter.

“It’s been a process this season of learning to play together, but tonight we shared the ball and that’s what made the difference for us,” said Flippin.

“Our team chemistry is coming together,” said Wilkerson. “Coach was telling us late that rebounding and free throws would be the difference in the game.”

BHS senior forward Kadarius Wells was strong inside against Turner in the second half, limiting him to only one point.

The Mustangs (8-6) and coach Todd Arnold cut the lead to 56-55 but Thrasher hit his first free throw after being fouled and then Wilson scored on an offensive put-back on the missed second shot to build the lead back out to four.

Davis finished with nine points as did Wells and sophomore Demeriunta Jackson. Elijah Kennedy and Anthony Sanders scored two each for BHS as well.

“It was important for us to win this first one at our place,” said Flippin. “We’ve got another big one Friday at South Jones. That’s where the region tournament will be played this season.”

BHS is back at home on Jan. 14 when they host Laurel.