The 15-yard unsportsmanlike penalty that turned Mississippi upside down 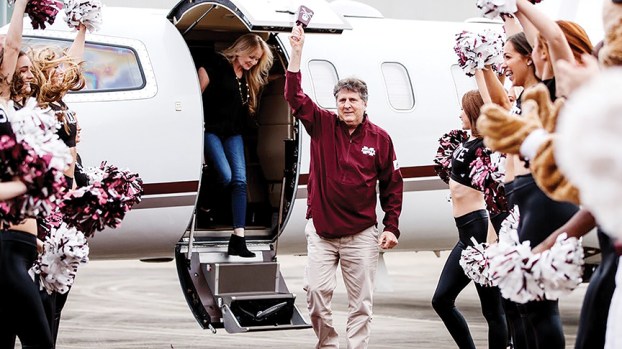 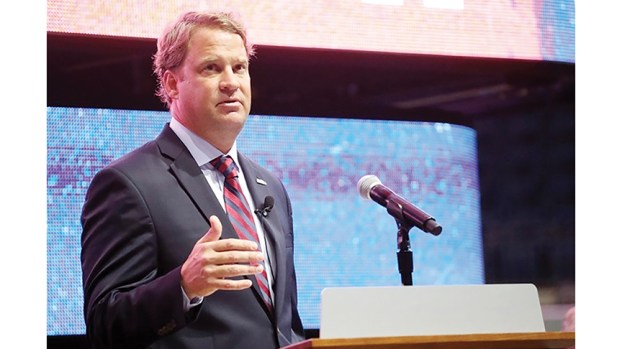 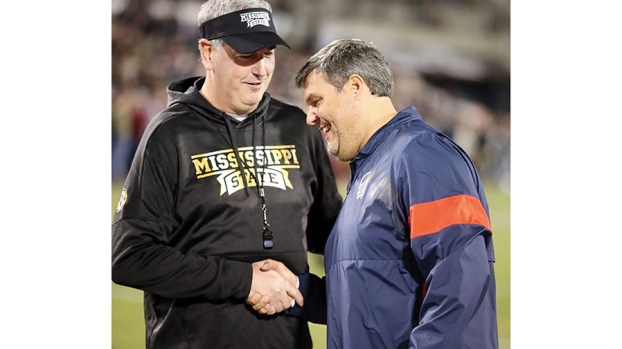 Photo by Ole Miss Sports Information Joe Moorhead and Matt Luke had no idea what was in store for them as they shook hands before what would be the final Egg Bowl for both coaches.

I’ve always loved books, movies and television shows that deal with time travel. I religiously watched “Quantum Leap” as a kid and I remember not being able to put down the Michael Crichton novel “Timeline” when I was a senior in high school.

You don’t have to be Marty McFly to know that most stories that deal with time travel always touch on the butterfly effect. That’s the idea that a single decision or change made to history — sometimes so minor — can have a larger effect that alters everything.

It’s almost like science fiction is the only thing that you can use in comparison with what’s happened to the Mississippi State and Ole Miss football programs since the 2019 Egg Bowl.

Forty-two days ago, Ole Miss sophomore wide receiver Elijah Moore dropped to his hands and knees and acted like a urinating dog while celebrating a touchdown in the Egg Bowl. The penalty that came after and the subsequent missed extra-point set off a series of events that has been the oddest by far in the 119 years of the rivalry.

The first domino to fall was Ole Miss firing Matt Luke as head coach on Dec. 1. Newly-named athletic director Keith Carter is a guy who is synonymous with Ole Miss from his career as a basketball player and then his later work at the school.

And Luke was of the same stock, a Rebel from birth who got his dream job in replacing Hugh Freeze.

However, when the schools invest millions into coaches and facilities and all that comes with SEC football, it’s a wins and losses business. And Luke didn’t win enough to keep his job.

Yes, Ole Miss was coming off major penalties levied by the NCAA from the Hugh Freeze era, but bowl eligibility looked to be in sight this season.

The Ole Miss defense was much improved, and that praise went to new coordinator Mike MacIntyre (who was hired as the next DC at Memphis on Thursday).

The Rebel offense continued to be enigmatic though as Rich Rodriguez wasn’t much of an improvement over the former offensive coordinator Phil Longo.

A win over Mississippi State would have possibly been a salve for all that though and may have gotten Luke another year.

Alas, that went to squat when Moore hiked his leg.

Carter drew some heat for firing Luke as the Ole Miss players were upset with how they weren’t informed before the news leaked to the public.

Louisiana-Lafayette coach Billy Napier was thought to be an early favorite as was Mike Norvell of Memphis. Norvell would soon agree to take a bigger job at Florida State.

All of that anger about how Luke was mistreated by those who liked him sort of faded into the smoke of a train engine on Dec. 7.

That’s when the Ole Miss Football Twitter account posted a gif of a speeding locomotive billowing smoke — a message to the world that the Lane Train was coming to Oxford.

Lane Kiffin is a coach with baggage, that’s not debatable. However, it seems that he’s grown up from the brash, cocky offensive wizard who helped build a USC powerhouse as an assistant before making some less than wise career decisions.

Fired by Al Davis and the Raiders in a very public spat, burned in effigy as he snuck out in the middle of the night to leave Tennessee and return to USC and then fired at 4 a.m. by USC after a 62-41 loss to Arizona State — Kiffin has seen some lows in his career.

However, his time at Alabama as offensive coordinator revived his brand as the Crimson Tide won three SEC titles in his three years in Tuscaloosa and a national championship.

He then went 26-13 in three seasons at the head coach at Florida Atlantic and won a pair of Conference USA title while leading the Owls.

If we’re being honest, what Ole Miss fans want from Kiffin as a head coach is the type of results they got from Freeze. They want the Rebels to be dynamic on offense and they want a coach that can go head-to-head with the best teams in the country in recruiting.

They’ll take all that but without the vacated wins or scholarships reductions that came after Freeze resigned.

Much of the staff has already been assembled in Oxford including Chris Partridge — a coach who was the top recruiter at Michigan. The push to signing day on February 5 will be a focus for Ole Miss as they signed 12 in the early period unlike many of their SEC brethren that signed classes of 20 or more.

So, MSU wins the Egg Bowl and gets a Music City Bowl berth and it looks like Joe Moorhead gets a third year in Starkville to build his program.

Lee Corso voice — not so fast my friends.

What did Moorhead in? Was it his best linebacker and his best quarterback getting into a fight after bowl practice? Was it the second half of the bowl game when Louisville ran over and through the Bulldogs in all three phases?

It was most likely was a combination of those things with an unwillingness to change or tweak what his vision was for the program. If he had handed out suspensions after said fight and acknowledged that he needed to make changes on his offensive staff after the bowl game, he may still be the head coach at MSU

Instead he told fans that don’t like him to “kick rocks” and “pound sand” after beating a bad Ole Miss team by one point. It didn’t appear that his team made any adjustments in the second half of the loss to Louisville, but after the game he said the program needed to “stay the course” it was on.

Napier from ULL and MSU alum Joe Judge were targets for Cohen early. Judge chose a bigger job in being named head coach of the New York Giants.

When I saw a tweet that a plane carrying Cohen from Starkville was headed to Florida, I just assumed Todd “3rd-and” Grantham was coming back to Starkville as head coach after previously being defensive coordinator there for Dan Mullen.

But Cohen didn’t go to Gainesville, he instead went to Key West where he ironed out a deal to hire Washington State head coach Mike Leach as the new top dog in Starkville.

Let that sink in for a second — Cohen didn’t go to Pullman, Washington to hire Leach. He went to the Florida Keys where Leach has a vacation home.

I was once talking to a coach who worked for Nick Saban earlier in his career. He was describing the grind that goes into creating the much lauded “Process” at Alabama.

He said Saban would feel especially generous on Labor and Memorial Day and let the coaches knock off and head home at lunch.

Mike Leach is the antithesis of Nick Saban — his “Process” involves being interested in 1,000 things other than football.

When Hal Mumme hired Mike Leach to work for him first at tiny Iowa Wesleyan and then later at Valdosta State and the University of Kentucky — they took offensive football to places it had never been before.

The S.C. Gwynne book “The Perfect Pass: American Genius and the Reinvention of Football” is a great source for the backstory on how Leach and Mumme came together.

When Mumme first brought Leach to Iowa for an interview, people thought he was nuts. An administrator at the school said there was no way Leach was a football coach as he’d spent their entire hour together talking about scuba diving.

There is no better coaching sound-bite in the country than Leach. He’s 55-46 in his career as a head coach at Washington State and Texas Tech.

He also has won 11 games in a season at both TTU and WSU. Leach has carved out programs that believe they can compete with anyone behind an explosive offense.

In 2008, Leach and his Texas Tech Red Raiders memorably knocked off a University of Texas team that was ranked no. 1 in the country.

Leach can be abrasive at times though and won’t flinch from sharply criticizing his players from the postgame podium. His biggest obstacle at WSU was a University of Washington program that beat his team in seven straight Apple Cups.

Washington is a physical football team that has nullified the “Air Raid” offense that Leach employs. What will that mean for that same formula against Auburn, Alabama and LSU?

Whatever success Leach has or doesn’t have in Starkville will ultimately decide the success of John Cohen as an athletic director. Cohen hired Moorhead after a national search to replace Mullen.

Cohen made the call to reboot the program and hiring the pirate-obsessed, pass-loving Leach has created excitement in a program that felt stale just over a month ago.

Kiffin and Leach have an affinity for each other so don’t expect much of the good old-fashioned hate between the coaches — they’ll leave that for the fans.

For this fan who cut his teeth watching the Rebels and Bulldogs tear each other apart for coaches Billy Brewer and Jackie Sherrill just 30 years ago — to now envisioning a 2020 Egg Bowl between two of the sharpest offensive minds in college football — yea, that sounds like science-fiction.