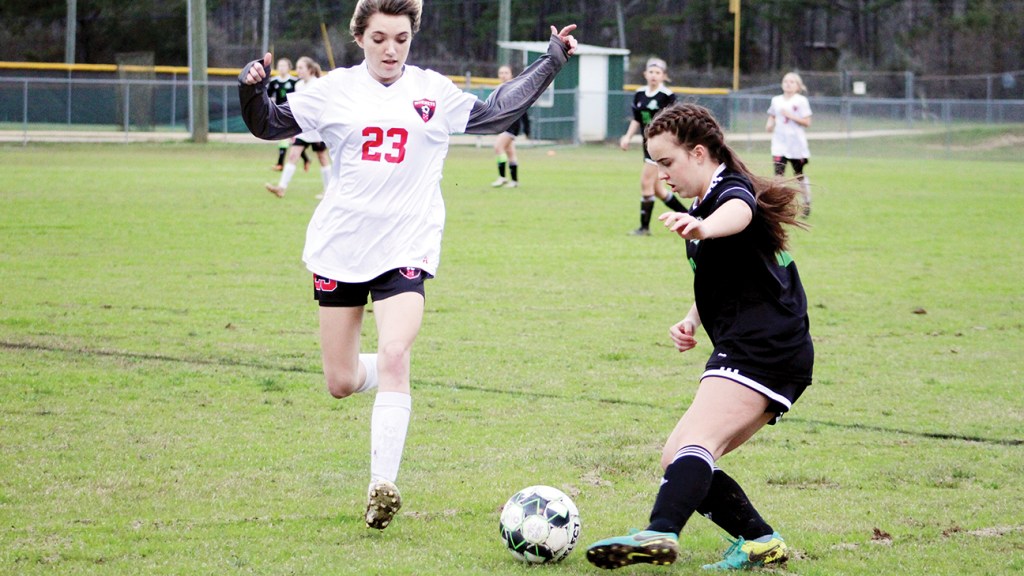 Senior Night on Perry Miller Field was extra sweet for the West Lincoln Lady Bears (5-13) as they took a 3-1 win over the visiting Loyd Star Lady Hornets (7-7-1) Friday night.

The Region 7-Class I victory was the first ever for the Lady Bears over Loyd Star since the school began their soccer program four seasons ago.

Freshman Cara Jarancik put her team up 1-0 in the first half with her third goal of the season.

Late in the first period Loyd Star went down a player when Adriahna McDavid was sent off with a red-card after the referee charged her with a dangerous challenge.

LS coach Dale Brister saw his team fight through the numbers deficit in the second half as they tried to get an equalizing goal.

The Lady Bears went up 2-0 early in the second half on a breakaway goal from sophomore forward Camryn Summerall.

Ten minutes later the Lady Hornets got on the board with a nice goal by Brooke Cade. Cade was the dirtiest player on the field as her white uniform was covered in mud from her hard work on the offensive end.

Summerall would add an insurance goal later in the half as a foul in the box gave WL a penalty kick that she blasted in. It was her 12th goal of the season.

Kaylynn Jarancik has been part of the team since its inception and has seen how far the program has come in a short time.

The 2016-2017 team played a handful of matches mostly against junior varsity competition as West Lincoln teacher Courtney Myers coached the squad for the first two seasons.

The second season saw the team get their first win over another recently established program at Bogue Chitto.

Last season football coach B.J. Smithhart pulled double duty coaching the girls and boys as the team finished 1-6-1 with a win and tie against Bogue Chitto.

In the spring West Lincoln principal John Shows hired Franklin County alum Briana Brumfield to coach the team. Brumfield led the team through a busy summer schedule and into the school year but resigned her position at Christmas.

At a recent board meeting the husband and wife duo of Jana and Dane Hodges were hired to coach the team. They were assisted by first-year boys’ coach Jeremy Johnson Friday night.

“The last two weeks working with the girls have been great,” said Dane Hodges. “I hate that the season is over, but we’re really looking forward to continuing to grow the program. For us to be at a 2A school and we’ve got a full junior varsity team for guys and girls, it just shows that there’s a great interest in soccer here.”

Kaylynn Jarancik agrees that the future is bright for future of Lady Bear’s soccer.

“I’m just so very proud of my teammates and how hard they’ve worked all season,” said Jarancik. “I knew tonight when we got up we were going to do whatever it took to get the win. We’ve got some young girls on the field, but they give it their all.”

Freshman Brooklyn Griffin and sophomore Angelina Shows both had assists for West Lincoln.

Loyd Star had won the first matchup between the teams 3-0 on Dec. 10.

The loss drops Loyd Star to 4-3 in division play. They currently sit in third behind Wesson. The Lady Hornets will play Bogue Chitto tonight and Wesson Thursday to close out their season.

Franklin County (15-4) has the division wrapped up and will go into the playoffs as the top seed. Wesson will likely be the second-place team and travel in the first round of the postseason. The Lady Bulldogs of FC are coached by Jeff Long and have outscored their region opponents 61-1 this season.

The West Lincoln season ended Monday night with a match at Franklin County. The Lady Bears and their new coaches are already looking forward to next season. The top three goal scorers in Summerall, Griffin and Cara Jarancik all return next season.

“We’ve got some great young talent that’s going to keep developing,” said Dane Hodges. “Tonight, you had eighth graders out there playing big minutes. We’re really excited to keep this momentum going into the off-season.”