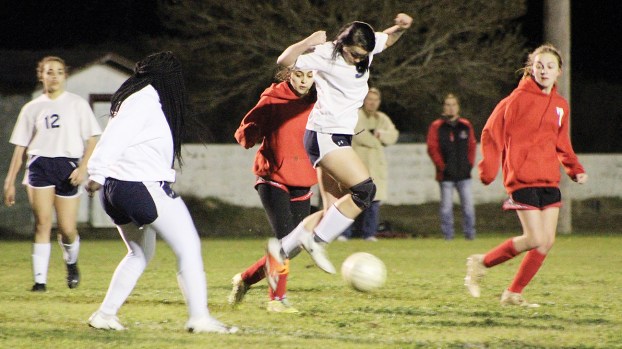 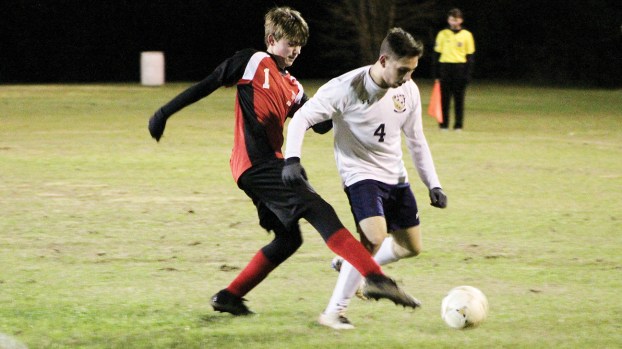 In a final regular season week of soccer action that has many teams’ playing three times due to the wet weather that soaked the area last week, Loyd Star and Bogue Chitto met Tuesday night at the Hansel King Sports Complex for a Class I-Region 7 matchup.

In the girls’ match, freshman Mary Claire McCurley was a one-woman wrecking crew as her five goals helped push the Lady Hornets to a 7-0 win. The boys’ match was a tighter affair with a late goal by the Bobcats enough to secure them a 2-1 victory.

Stalwart senior class wrapping up their career for the Lady Hornets

The Lady Hornets moved to 8-7-1 on the season with the win. The Loyd Star program will have massive shoes to fill when the senior class of Tabby Wyant, Morgyn Brister, Megan Garcia, Adriahna McDavid and Karmyn Barlow soon wrap ups their careers.

Most of them started playing big minutes as freshmen and last season they helped propel Loyd Star to a playoff berth and a second-place finish in the region as juniors.

Wyant and Brister are co-captains and the two loudest voices on the field for LS. Wyant is a cheerleader, letting her teammates know where she is and telling them to keep their heads up when things go bad.

Brister has the voice of a coach as she calls out where her teammates should go next — that’s a natural spot as she’s the sixth of her siblings to play soccer for her father Dale — who also serves as the Loyd Star coach.

What will she miss the most when her senior season ends? Playing for her dad is at the top of her list.

“I’m going to really miss my dad coaching me,” said Brister. “Since I first started playing the game, he’s always been my coach.”

That feeling is mutual as her coach is going to miss that special relationship as well.

“It’s been a great thrill to get to coach my kids at Loyd Star,” said Dale Brister. “All that time spent together at practices and games, it’s been a huge part of our lives.”

Brister leads the team as a paraprofessional and is assisted by Jordan Lea.

He didn’t set out to become a high school soccer coach. He worked with teams that his children played on through the recreation department and was first asked to coach the junior varsity at the school.

“Stuart Sellers kind of railroaded me into taking the job,” says Brister. “He was coaching the boys and had been a huge part of starting soccer at Loyd Star. I started with the junior varsity boys and then coached varsity boys only until coach Bobo Douglas left to go to Wesson and they needed someone to coach girls too.”

The work of people like Sellers and Brister to help nurture grassroots soccer in the area has paid off with the sport showing a steady growth over the years.

Bogue Chitto reflects that as the Bobcats soccer program is just three years old. Last season the Lady Bobcats didn’t win a match, but this season they are 7-12 for coach Shane Nippe.

BC has wins this season over 4A Lawrence County and a pair of victories against 5A Natchez.

“Bogue Chitto and West Lincoln have built very strong programs in a quick amount of time and I think shows that soccer is on the rise in our area,” said Brister.

McCurley, Cade and the other underclassmen on the team is what Wyatt will miss the most when her time with LS soccer soon ends.

“The girls, that’s what I’ll miss the most,” said Wyant. “You spend so much time together and you really become a family with your teammates, I’ll miss that.”

A pair of Yosin Hernandez goals was enough to give BC a win in the boys’ match.

Hernandez got his first goal on a rebound midway through the first half. Michael Rayborn had put a hard shot on Loyd Star junior goal keeper Nathan Nusbaum. Hernandez corralled the deflection and put it in for the first goal.

Nusbaum made several athletic saves to keep his team close in the first half. Payne Walker, Christian Steckler and Tanner Jordan are seniors for the Hornets (4-9-1).

The Hornets were a bit short handed without junior forward Luis Benauidez who was out after suffering an ankle injury against West Lincoln last week.

In the second half the Hornets got on the board via a Walker goal.

A penalty kick goal by Hernandez with three minutes remaining ended up being the difference.

Yosin Hernandez, Enrique Hernandez and Rayborn form a dynamic offensive attack for the Bobcats. They put pressure on the opposing defense by controlling possession for long stretches at a time.

A season after going 2-11 in their second year of soccer the Bobcats are now 11-6-1. The fact that they’ll not make the playoffs after suffering a pair of losses to West Lincoln is further proof in how much Region 7 soccer is improving.

In other area soccer action

Franklin County swept a pair of matches at Brookhaven High. The Lady Bulldogs won 5-1 and the boys’ match was a 3-0 FC victory.

Wesson split a pair of games at Hazlehurst. The Lady Cobras won 11-0 and Hazlehurst won the boys’ match 1-0.

Lawrence County was swept in region action against Sumrall with the Lady Bobcats winning 9-0 and the boys’ match going 2-0 in favor of Sumrall.