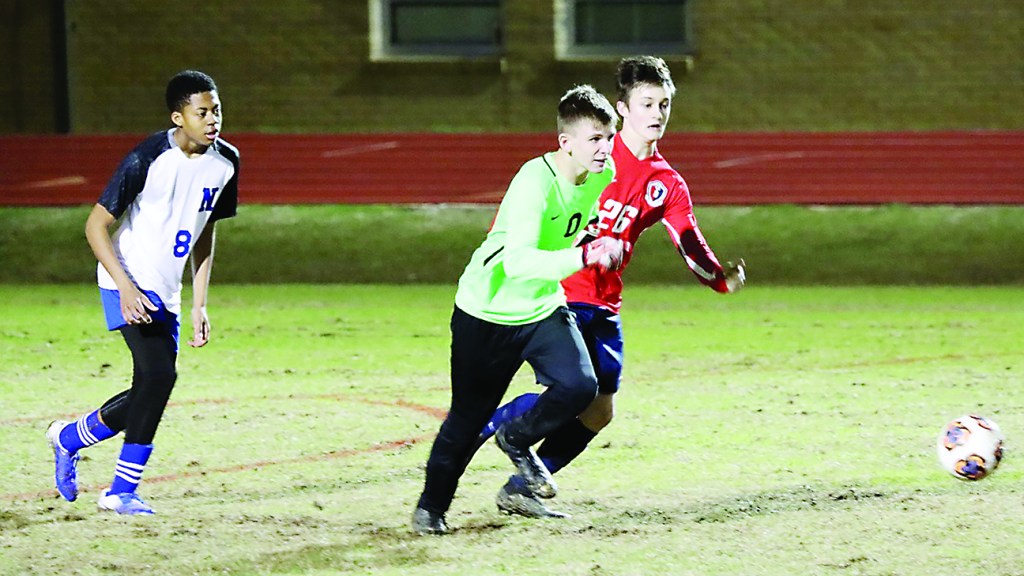 Photo by Terri Mabile Eighth grade goal-keeper Bryce Smith and sophomore Bennet Jones hustle after a ball against Natchez earlier this season for Brookhaven High School. Monday night, BHS had their season ended by a 5-1 loss to West Jones in the MHSAA 5A soccer playoffs.

The postseason ended after one match for the Brookhaven High School boys’ soccer team as the Panthers (7-11-2) were beaten 5-1 by West Jones Monday in the opening round of the MHSAA 5A state playoffs.

After making the playoffs for three straight seasons between 2015-2018, last year was a step back as coach Aaron Ayers and his crew missed out on the postseason.

This year, Ayers put forth an extremely young team that had junior high age players in several key positions. The season was a growing process for the group and their coach has seen them gain confidence.

“I have seen them become more physical and not be afraid not to back down from a challenge,” said Ayers. “Towards the end of the year we started playing our best soccer and we look forward to carrying that over into the off-season of summer workouts and practices that will get us prepared for next year.”

It was one of the elder Panthers — junior Trace Brady — who scored a goal for BHS Monday night at WJ. Brady, Ryaln Fortado and Jack Bower will be the seniors on the team next season as the Panthers had none this year.

There were four future juniors on the squad this season led by Brady’s brother, Addison. Freshman Cole Cruthirds was one of the leading goal scoring threats for BHS in his first year as a high school student.

The rest of the team was very young with 10 eighth graders and six seventh graders playing a mixture of varsity and junior varsity matches.

Ayers and his assistant coaches Dustin Bairfield and Kevin Bower got goals this season from eighth graders Walker Williams and seventh grader Markham Williams — another set of brothers. Eighth grader Ashton Ogletree was another junior high age player at scored this season for the Panthers.

“We need to use this year to learn from our mistakes as a team and be ready to come back next year to compete with the other teams on our schedule,” said Ayers. “We have a great group of young talent and I expect them to make great improvements next year.”

Monday night, BHS was facing a Mustang team that has gotten the better of them more than once over the years in playoff action. WJ eliminated BHS 1-0 in the postseason of the 2016-2017 season.

An experienced squad that has four seniors and 11 juniors on their roster, West Jones applied pressure all night on BHS, but Ayers was proud of the resolve he saw from his bunch.

“I am extremely proud of the never give up mentality of this team,” said Ayers. “They’ve really come together as a group and learned to play as a team.”

That “never give up” mentality was strongly shown in the play of eighth grade goa- keeper Bryce Smith. Called on to step in as a varsity starter last year as a seventh grader, Smith has been a big presence in front of the net this season as a full-time starter.