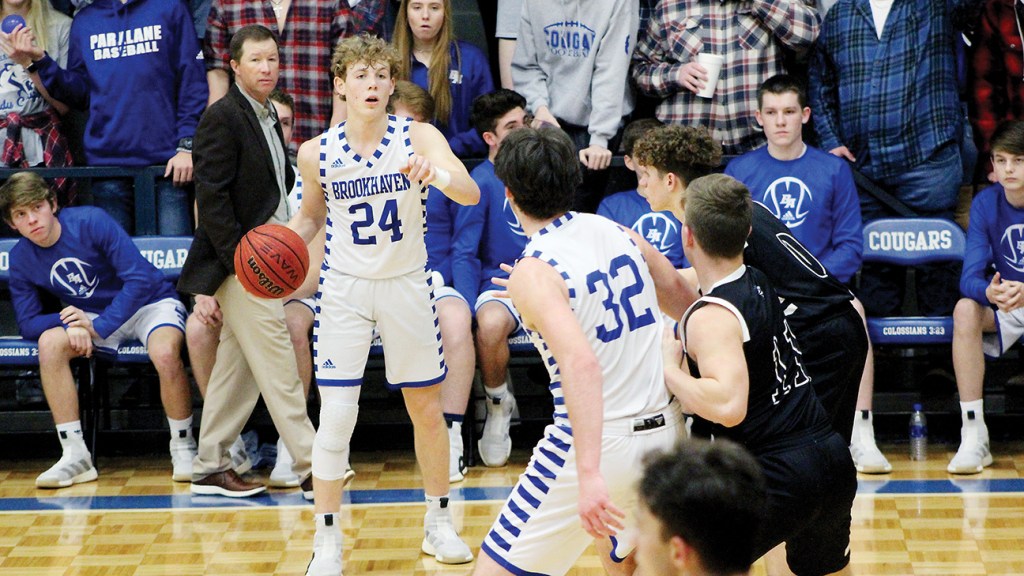 Photo by Cliff Furr Brookhaven Academy junior guard Gavin Brogden looks inside during the second half of the Cougars victory over Oak Forest Academy Tuesday night. BA shot 51 percent from the floor and held OFA to just six made field goals in a 58-21 win.

“Every time they shoot it the ball looks like it’s going in,” said Matherne.

Those words would be prophetic as the Cougars came out gunning from the gate in a 58-21 whipping of the Yellowjackets.

BA hit five first quarter 3-pointers as they jumped out to a 22-8 lead after the opening eight minutes.

As good as the offense was, it was his defense that Cougar coach Josh Watts was most worried about. On Jan. 10 his team traveled to Amite City, Louisiana to face the Jackets on their homecourt — a MAIS District 4-4A game that OFA ended up winning 75-71.

“If my team scores 71 points, I believe that’s a game we should win every time,” said Watts. “I was on them hard about how I wanted us to guard. We were watching film until 7 p.m. last night because this was such an important game for us.”

The win puts BA into the drivers-seat in the division as the schools won’t play a district tournament. The Cougars now need wins over Adams County Christian School, Silliman and Cathedral — all teams they’ve beaten once this season — in order to lock up first place in the district.

That will make them the No. 1 seed from District 4 when the MAIS 4A South State Tournament begins on Feb. 10.

“We might not have a district tournament, but this was a playoff game for us tonight,” said Watts. “The other district in the south has Simpson, Hillcrest and Hartfield at the top — the goal for us has always been to win the district so you don’t have to face one of them in the first round of south state.”

It was Nelson who got BA on the board with a 3-pointer to start the game. At the end of the second quarter Tyler Fortenberry stole an OFA in-bounds pass and went above the rim to get a lay-up just before the halftime horn. The Cougars led 40-11 at the break.

Like his coach, Nelson says the defensive end was the first priority for BA coming into the game.

“We knew we needed to guard better than we did down there,” said Nelson. “We were locked in tonight and everything was clicking. Coach Watts didn’t even have to take his jacket off.”

There wasn’t much of a reason for Watts to shuck his outerwear as the large, home crowd had plenty to cheer about from tip to final buzzer.

“Our fans and student section especially were great tonight,” said Watts. “The first time we played them it wasn’t that we didn’t guard, but we were too aggressive and really got hurt by their back-cuts. Tonight, we sat down and guarded like we’re supposed to.”

Dylan Fortenberry was the only other Cougar in double figures with 10 points while also grabbing eight rebounds. The second half went quickly as a mercy-rule had the clock running non-stop once BA went up by 35 points.

The Cougars play their final home game of the season on Feb. 6 when they host Cathedral.