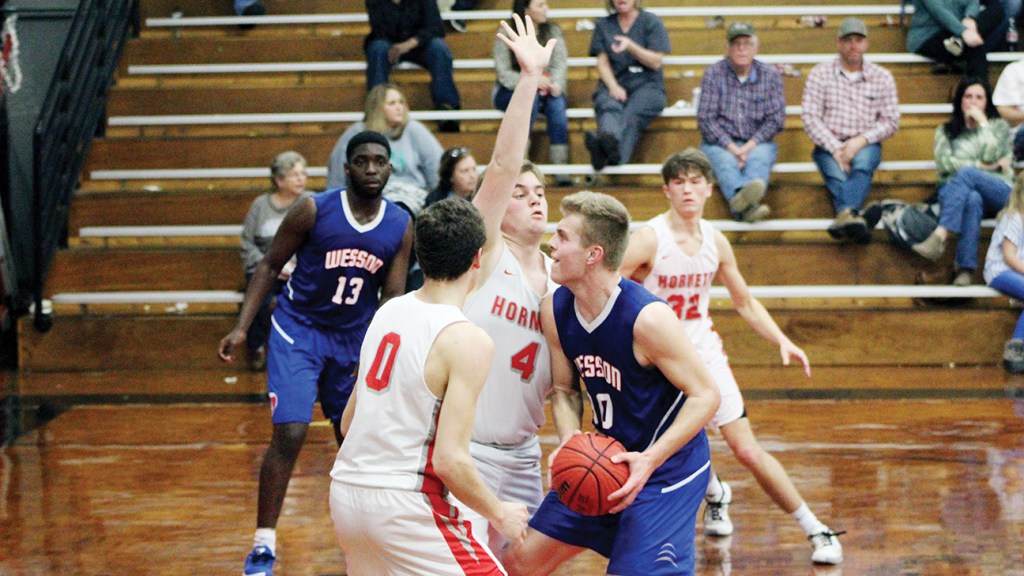 Photo by Cliff Furr Wesson senior forward Kenner Bizot gathers himself against the defense of Loyd Star defender Will McCullough Tuesday night. Bizot scored a game high 24 points for the Cobras in their win.

Loyd Star will be the site of the Region 7-2A tournament next week and on Tuesday night the Hornets and Wesson Cobras met in a matchup that further decided who’ll earn a first-round bye in the tournament.

Lady Hornet (17-7, 7-2) senior forward Taylor Smith has recently upped her scoring output and Tuesday night she poured in 25 points to lead her team to a 74-47 win.

The game was close in the early going as LS and coach Gene “Moochie” Britt led 20-14 after the first quarter. Smith hit a buzzer-beating 3-pointer just before the first quarter horn that fired up the large home crowd.

Loyd Star has become more comfortable playing at a faster pace as the season has progressed, as sophomore point guard Aubrey Britt is a blur leading the fast break on missed baskets.

Tuesday, Britt had the pedal to the metal in the second quarter when the Lady Hornets went on a 20-0 run that put the game away. Britt finished with 19 points and senior guard Carly Beth Wallace added 18 as well.

In a ceremony after the game Loyd Star seniors Smith, Wallace, Kelsie Foster and Ta’maria Townsend were honored.

The game had a much different feel than the first meeting between the schools, one Loyd Star won 34-29 in Wesson on Jan. 17.

The win cements Loyd Star as the second-place team in the region behind West Lincoln.

Both schools will have a first-round bye when tournament play begins on Tuesday of next week.

They’re both also automatically qualified for the MHSAA 2A state tournament that begins on Feb. 17 and will either host a first-round game or travel depending on how they fare Thursday night in the semifinals of the region tournament.

“This gives us a first-round bye, regardless of what happens Friday night against Bogue Chitto,” said Britt.

Bogue Chitto and Loyd Star are also likely to meet again in the region tournament semifinals next week as well.

Wesson jumped out to 18-5 lead and the bigger, more experienced Cobras were never seriously challenged.

The Cobras like to play a fast pace and they got that from the start though the second quarter — Loyd Star outscored Wesson 8-6 in that period — was filled with more turnovers and missed shots than made baskets.

In the second half Wesson got on track behind a big game from senior forward Kenner Bizot. Bizot was more than LS could handle on the boards and his quick outlet passes had the Cobras zipping up the court.

“Kenner played well in the second half,” said WAC coach Rusty Newman. “He only had six at halftime, but he stepped it up.”

Bizot had a season high 36 points when the teams first met on Jan. 17.

The junior duo of Larson Lewis and Antrelle Sims added 16 and 15 points respectively for the Cobras.

Wesson will finish their season with senior night against Enterprise at home Friday night. They’ll also be keeping an eye on the Amite County and West Lincoln game.

If WAC beats Enterprise and AC stays perfect in region play by beating West Lincoln — the Cobras will be the second seed in the region tournament next week.

“Amite County has a good team — no doubt,” said Newman. “Their point guard Ketnrel Steptoe is what makes them go. Our last game with them (a 65-40 loss) was closer than the score showed. I’ve seen where some people have them as one of the top ranked teams in 2A this season.”

The region tournament will have four games each day with action taking place on Tuesday, Thursday and Friday of next week.