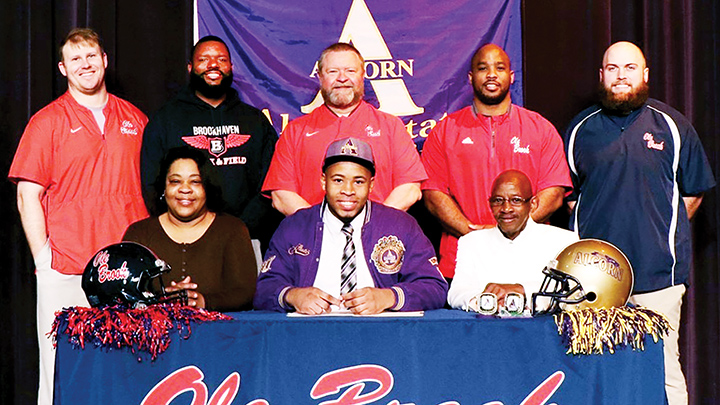 Over the course of his career, Brookhaven High senior KaDarius Wells has been a guy that the Panther football coaching staff could always count on. Used on both sides of the ball at the line of scrimmage, the 6-foot-3, 235-pound Wells has been a physical presence that the opposition has had to account for.

Wednesday morning in the BHS auditorium, Wells made the next step in his athletic and academic journey as he signed a letter-of-intent with Alcorn State University.

“When I got on campus it felt like home,” said Wells. “Their entire coaching staff showed me love during the recruiting process.”

Wells says Alcorn likes him as a tight end and that’s not surprising. For a man his size he has hands that are soft, and his feet are nimble. One only has to watch Wells play basketball — he averages 6.3 points and 5.3 rebounds per game — to see those attributes on display.

Better known as KD to his friends and family, he caught seven passes for 76 yards as a senior. Wells was a fearsome defensive end, making 40 tackles, one sack and forcing a fumble as teams often ran the ball away from him.

As a junior, he made 40 tackles as well, and led the team with 5.5 sacks. You could imagine Wells toning up and become a pass catching tight end in college. Or you could even see him bulking up and playing on the defense as an end or tackle.

What football coach Tucker Peavey and basketball coach Marcus Flippin rave about is the consistency with which Wells carries himself.

“He’s a good athlete, good person and good student,” said Peavey. “He’ll be successful at Alcorn and he’ll only get better as a player.”

Strong in his academics, Wells wants to pursue a career in occupational therapy.

In fact, Wells was one of just two of those 28 signees to be a high school player from the state of Mississippi. The Braves had other high school signees that hailed from Alabama, Georgia, Florida, Texas and Louisiana.