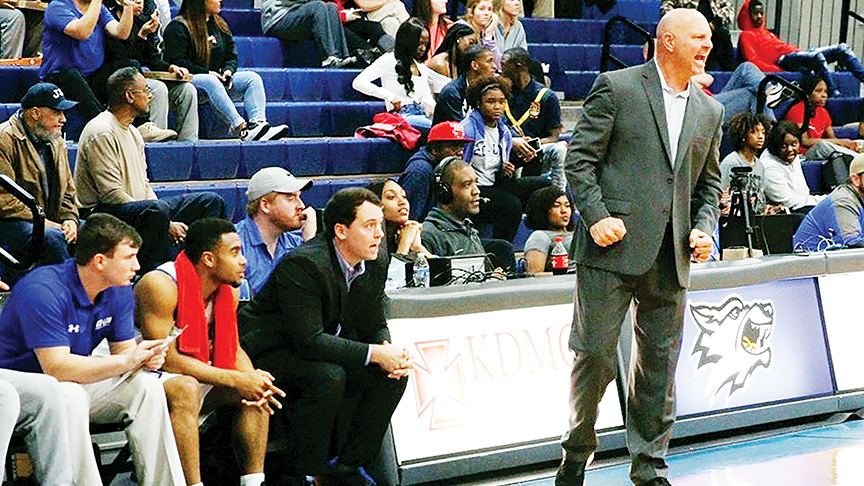 Photo by Co-Lin Sports Information Head coach Kenny Bizot and his Co-Lin Wolves have suffered close losses of every variety this season, but Monday night they captured a nail-biting win over their rivals from Southwest.

opiah-Lincoln Community College head men’s basketball coach Kenny Bizot has been in his profession long enough to know how cruel the game can be.

This season, though, Bizot could be excused if he felt like the basketball gods were picking on him individually.

The Wolves have had a career full of close losses all wrapped up into one season.

It started with a 75-74 loss at Mississippi Delta that came when CLCC went up with two seconds left — only to see Delta win the game on the free throw line.

The return game a few weeks later saw Co-Lin lose by four at home to Delta.

Then there was a 63-61 loss to a then-unbeaten Gulf Coast team in Perkinston. The Wolves got a final shot attempt at the buzzer in that one, but the 3-point attempt and potential game winner rimmed out.

The very next game, Co-Lin was on the wrong end of a buzzer beater as East Central won 73-71 with a shot at the horn in Wesson.

The streak of tight contests would continue for CLCC as they played back-to-back overtime games next.

The first one was a 77-74 loss to Southwest in Summit.

An 80-79 overtime win over Hinds in their next game allowed Bizot and his team a chance to breathe and think that maybe they were done living on the razor thin edge between victory and defeat.

That lasted a few weeks, until the Wolves met their division foes for a second time this season.

It was another dog-fight with Gulf Coast. This one an overtime 58-56 loss. Again, the Wolves got a look at a game-winning 3-pointer that just missed.

That same week the Wolves went to East Central and — you’re not going to believe this — lost 79-76 in overtime.

Four overtime losses and seven total losses by four or less points each.

One or two more made shots in each of those games and the Wolves have a significantly better record than the 7-13 mark they carry right now.

Much can be learned from a season of struggle though, and we often grow more after the losses than the wins.

After the latest East Central loss, Bizot had an individual meeting with every player on the team to ask them a question — are you in or are you out?

“Every guy, without a second of hesitation said they were still in,” said Bizot. “They said they were ready to still fight and put in the work, despite how the breaks have gone against us.”

Monday night, Bizot and his bunch got back on the winning side of the page with a 72-69 win over Southwest in Wesson.

The Wolves rode the hot shooting of freshman guard Demarcus Ellzey to a lead and then fought tooth and nail to hold off any SW comeback.

Ellzey — a product of South Pike High School — finished 7-of-9 from the 3-point line.

Bizot admits that as the game tightened to one possession with under 30 seconds remaining, his mind was racing a mile a minute.

“You’re obviously trying to focus on the end-of-game strategy, but at the same time you’re just hoping for your guys that they can secure the win,” said Bizot. “I didn’t know what I could say to them if we let it slip away.”

The Wolves did complete the win, though. They got the ball into the right hands late and made free throws to ice the victory.

Two seasons ago, when the Wolves were 19-6, they won these types of games. They got the offensive rebound and put-back late that they needed or knocked down a buzzer beating 3-pointer to win a game. That season saw the breaks go their way.

“Our effort on game day has never been in question all season,” said Bizot. “They’re going out and playing as hard as possible. We’ve actually rebounded very well against bigger teams all year. For us it comes down to free throw percentage, turnovers and 3-point percentage. Against Southwest we were strong in all three of those areas and that’s the difference in the game.”

The Wolves have three more games remaining in their regular season. They’ll visit Hinds Thursday and Meridian next Monday.

Their season ends with a home game against Jones College on Feb. 20.

Cliff Furr is the sports editor at The Daily Leader. He can be reached by email at sports@dailyleader.com