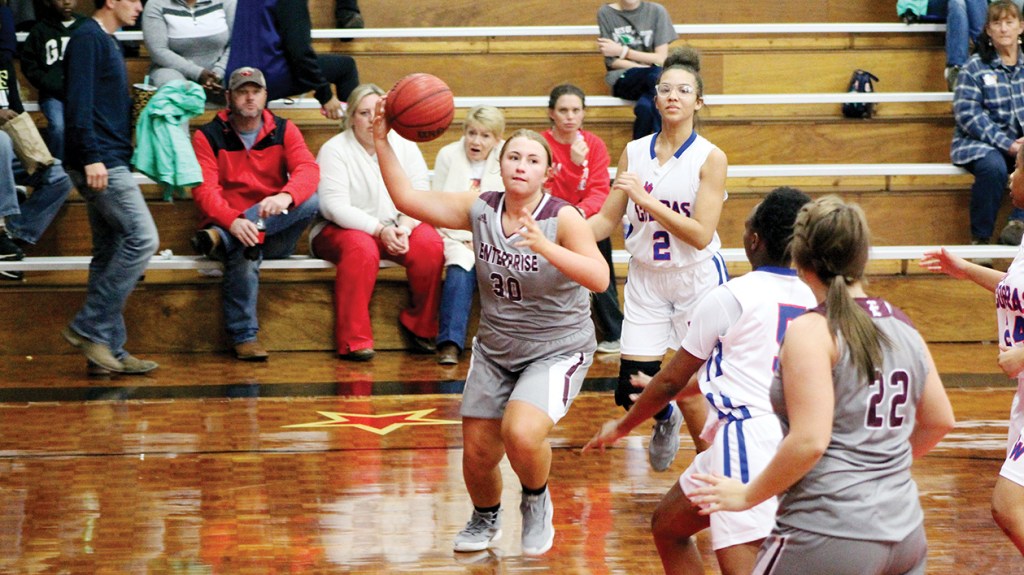 Photo by Cliff Furr Enterprise sophomore forward Natalie Harris eyes a Wesson defender as she gets ready to attempt a layup Tuesday night in the Region 7-2A tournament at Loyd Star.

The girls’ semifinal matchups for Thursday night are set at the Region 7-2A tournament as West Lincoln and Wesson tangle at 4 p.m. while homestanding Loyd Star takes on county foe Bogue Chitto at 7 p.m.

Tuesday night in the quarterfinal round, Wesson and BC kept their seasons alive with wins over Enterprise and Amite County respectively

The best season by a Wesson girls’ basketball team in recent history continues to roll on after the Lady Cobras (13-13) eliminated Enterprise with a 54-44 win.

The game had a bizarre ending that was marred by poor officiating.

With 1:10 remaining in regulation an Ashlyn Bland 3-pointer pulled Enterprise to within 46-44. In attempting to foul and stop the clock, Jergins was called for a questionable intentional foul that was her fifth personal.

Adams petitioned to the officials why the call was intentional as he felt Jergins was making a play for the ball.

A referee then told Adams he had 20 seconds to insert a replacement for Jergins. While all that was going on one of the other officials was letting Wesson shoot the flagrant free throws with only four players from Enterprise on the court.

It was the type of professionalism and decorum from referees that you see at team camp in June.

Without saying another word to Adams, the same official that called the flagrant then gave Enterprise a technical foul for not yet putting a substitute in quickly enough.

Wesson knocked down all four free throws to effectively end the game while Adams and his team were hammered by poor communication by the officials.

If the scenario had been handled properly, Wesson would have not shot free throws until Enterprise had five players on the court.

The official would have asked the timekeeper to put 20 seconds on the clock for EAC to sub in a player. When that time was up, a horn would sound and the referee would then call for the sub one last time. Then if Adams had not subbed in another player, a technical foul would have been warranted.

“We still would have had to make some shots and caught some breaks late, but the way things ended didn’t do us any favors,” said Adams. “I’m proud of the way my girls fought in the fourth quarter. We started one senior (Belle Porter), one junior, two sophomores, and an eighth grader. They gave it all they had tonight.”

in two of four quarters

Coach Robbie Walters saw his Lady Cats come alive after that as they didn’t allow Amite County to score a point in the second and fourth quarters of a 50-17 win.

The inside duo of senior forwards Kamilah Clay and Katelynn Palmer led BC in the win. Palmer scored 16 points and Clay added 11.

Clay and Palmer along with fellow seniors DeAnna Edwards and Kayden McKnight form an experienced core for the Lady Cats. Their outside shooting took a hit though when senior guard Tuana Brumfield went down with a lower leg injury midway through the season.

Since the junior high season ended, Walters has been working some of those young players into his rotation. Tuesday night, eighth grader De’Maya Porter came off the bench to score six points. Sophomore Kaitlin Poole also added seven points off the bench for BC.

Bogue Chitto beat Loyd Star 51-39 when the schools met back in December at the Lincoln County Tournament. On Jan. 21 the Lady Hornets took a 62-60 win on their home court and last week in the regular season finale Loyd Star picked up another win — this one a 47-36 victory at Bogue Chitto.

Wesson, West Lincoln, Bogue Chitto and Loyd Star are all now qualified for the MHSAA 2A State Tournament that begins Monday. The winners of the semifinal games Thursday night will host a first-round game next week while the two losers will travel on Monday.

On Friday, the consolation game will take place at 4 p.m. and the championship game has a 7 p.m. tip time.