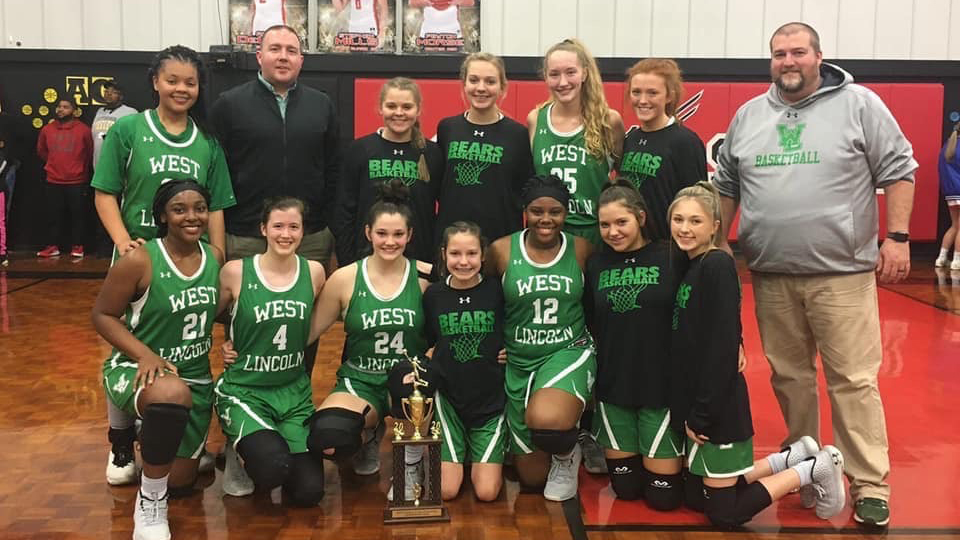 Photo submitted The West Lincoln Lady Bears will host Enterprise-Clarke tonight at 6 p.m. for a MHSAA 2A State Tournament opening round game. The Lady Bears won the Region 7-2A tournament for a third straight season Friday with a victory over Loyd Star.

For a third straight season, the West Lincoln Lady Bears are Region 7-2A Tournament Champions. On Friday night the Lady Bears captured the title with a 62-51 win over Loyd Star.

In the win over Loyd Star, the Lady Bears got big production from their high scoring duo of junior forward Britany Sturkey and freshman point guard Kara Beth Addison. Sturkey scored 22 points including a 7-of-10 performance from the free throw line.

Addison scored a team high 23 points for coach Brooks Smith. Senior forward Bailey Wilson was also in double figures with 13 points. Freshman forward Ta’Kyla Brothern was the only other Lady Bear who scored as she added two points.

After the game Sturkey and Addison were named co-MVPs of Region 7-2A and Smit was named coach of the year. Wilson was also named All-Region.

West Lincoln played lights-out last season on their home court during the postseason as they made it all the way to the 2A championship. They beat Richton, Enterprise-Clarke and Taylorsville all in Case Gymnasium to reach the state semifinals.

Enterprise has a young team with just one senior on their roster in Faith Guy. Smith says he expects the Lady Bulldog to play hard despite them being the fourth seed from Region 5-2A.

The Lady Bears have a similarly young squad as Wilson and Paige Shedd are the only seniors for the green and white.

Replacing four senior starters took some time as West Lincoln started the season with 2A contender Puckett (25-3), 4A Lawrence County, 6A Germantown (24-5) and 4A North Pike. That put them with an 0-4 record, but the Lady Bears began to find their legs with a 3-0 week at the Lincoln County Tournament in early December.

West Lincoln went 10-0 in division play and hasn’t lost a game since a 68-51 loss to MAIS title contender Simpson Academy on Jan. 4.

Tipoff tonight in Fleahop is set for 6 p.m.