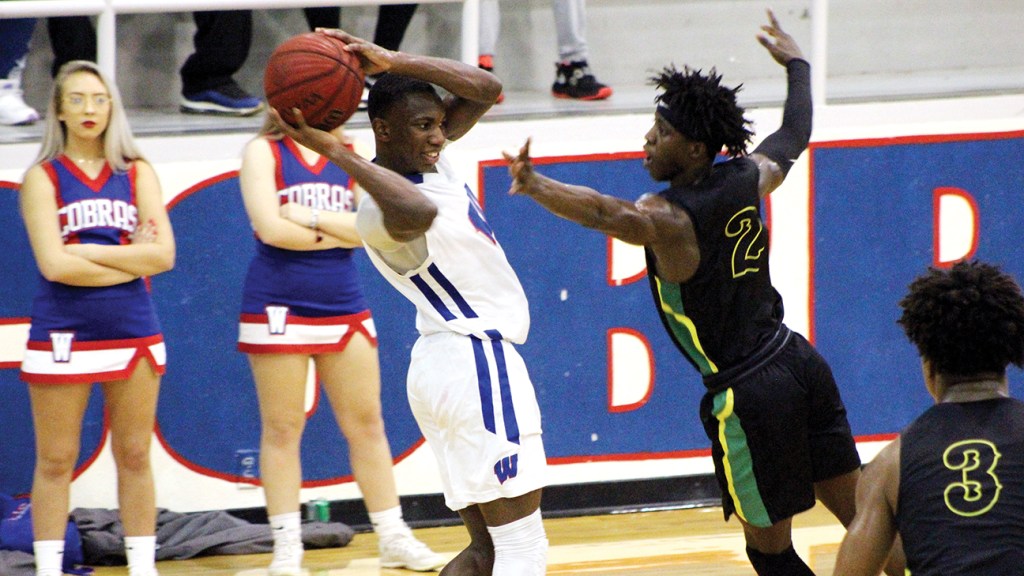 Photo by Cliff Furr Wesson junior guard Antrelle Sims pulls the ball away from a Taylorsville defender Tuesday night in an MHSAA 2A opening round playoff game.

“It was everything you could ask for in a high school playoff game — you hate for anyone to have to lose one like this,” said a smiling Wesson head coach Rusty Newman Tuesday night.

Newman was grinning because his Cobras (15-11) had just punched their ticket to the second round of the MHSAA 2A boys’ playoffs with a 70-67 win over Taylorsville (18-7) in the Snake Pit.

With the outdoor temperature hovering just over an unseasonal 70 degrees at tipoff, the backdoor of the Wesson gym was propped open as things were humid and steamy inside all night.

Momentum went back and forth as the teams were evenly matched and both were comfortable playing at a sped-up pace.

The biggest shot of the night came with just over two minutes left in the game. Wesson trailed 61-59 when junior guard Antrelle Sims leapt over the Taylorsville defenders to secure an offensive rebound.

Sims then took the ball baseline and made a bounce pass to the opposite corner where senior guard Damien Smith was all alone.

Smith confidently launched his only 3-point attempt of the night and it splashed through to give Wesson a 62-61 advantage — a lead they’d not surrender.

After the Smith 3-pointer Wesson got four Darrian Gibson free throws over the course of three possessions to push their lead out to 66-61.

The Tartars didn’t give up though — a long, banked-in 3-pointer by junior Arterrious Miller cut the lead to 66-64 with 17.6 seconds remaining in the game.

Newman called a timeout to set up how his team would inbound the ball underneath the THS basket.

Out of the TO junior Larson Lewis reared back and chunked a deep pass that found a wide-open Sims who collected the pass and made a layup while being fouled.

Sims had peeled away from a stacked Wesson formation and his made free throw put WAC up 68-64.

Another long 3-pointer by Miller at the buzzer was the finals score of the night.

“The plan was for me to come off a screen and know that I’d immediately get fouled,” said Bizto. “Larson saw Antrelle get open and he made a great throw. When he first threw it, I wasn’t sure what he was doing, but then I realized who he was throwing it to. Antrelle is one of the best wide receivers in the state and I knew he’d catch it.”

Sims was a MAC 2A All-State selection as a wideout for the Cobra football team.

The Taylorsville football team is known far and wide as a small school powerhouse. Of the nine players that dressed out Tuesday for THS basketball coach Brandon Jennings, only one was not a member of the Tartar’s state championship football team in 2019.

Junior Jeffery Pittman led THS with 21 points and Ty Keyes added 14 as did Miller. The 6-foot-1, 180-pound Keyes is a four-star quarterback that has offers from Auburn, Mississippi State, Ole Miss, Arkansas, Nebraska and Oregon.

Newman told his team that the Tartars would be physical, and they’d have to match that if they wanted to win.

“Coach was really stressing to us that we’d have to play defense tonight and work together to rebound,” said Gibson. “We knew they’d crash the boards hard and we needed to block out as a team.”

A 3-pointer by Lewis just before the first quarter horn cut a Taylorsville lead to 18-16 at the end of the first eight minutes. The Tartars led 34-29 at halftime.

In the third quarter Wesson began to shoot like a team that was confident on their home court as Lewis, Gibson and Bizot all knocked down 3-pointers in the quarter and THS led just 48-47 at the start of the fourth quarter.

The final quarter was nip and tuck as the teams were tied at 50, 52 and 56 before the big corner 3-pointer by Smith gave Wesson their final lead.

Wesson moves on to face Philadelphia Saturday at 6 p.m. on the road in the second round. Philadelphia (21-5) won Region 6-2A with a 10-0 record and beat East Marion 72-61 Tuesday night.

The Tornados are coached by Willis Tullos who won multiple state championships as the girls’ coach at Choctaw Central. The early scouting report is PHS isn’t big but has a quick team that pressures on defense.

Tuesday night though Newman was still taking a moment to enjoy the first-round win — the first since a win over St. Andrew’s in the 2015 playoffs.

“Our kids showed a lot of heart tonight,” said Newman. “They never panicked and rose to the challenge time after time — I’m just proud of everyone on this team. It took everybody tonight to get this win.”