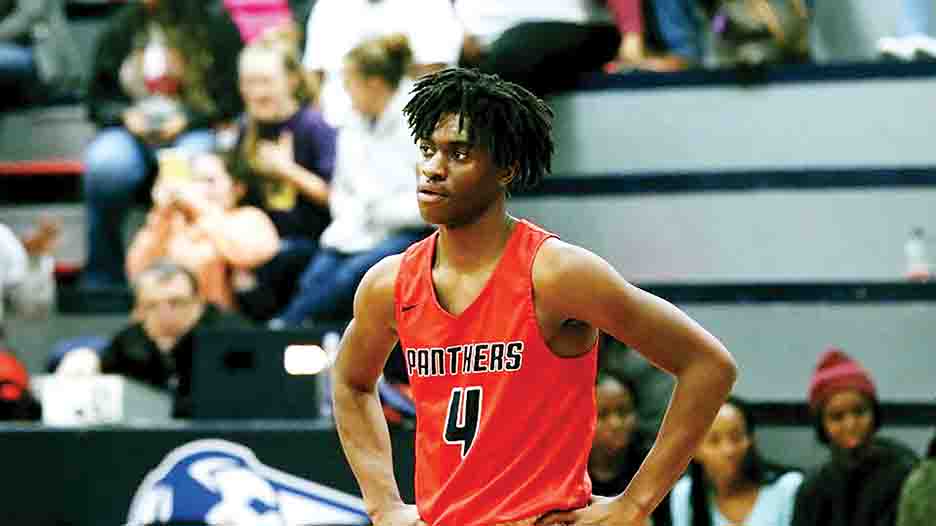 Photo by April Clopton Brookhaven High senior guard Johntavious Wilkerson scored 14 points and grabbed nine rebounds for the Panther in a 47-45 win over Laurel in the division championship game.

The second round of the MHSAA 5A State Tournament will see a pair of games being played Friday night in Sinclair Gymnasium as the Brookhaven High Panthers and Natchez Bulldogs link up for two playoff games.

Prior to reclassification last year, Brookhaven and Natchez were members of the same region for six seasons so there is a level of familiarity between the long-time rivals.

Last season the Lady Panthers tangled with Natchez three times and won by an average of 36 points in those meetings.

This Natchez team has one big difference though as Alphaka Moore is back on the bench leading the Lady Bulldogs.

From 2013-2015 Natchez went a combined 40-2 and won back-to-back 5A state championships with Moore coaching the team. She then left after the 2016 season to take a job at her alma mater — Laurel High.

In her absence Natchez didn’t have a winning season. After three years in Jones County Moore came back to Natchez High this season when she was hired as athletic director and head girls’ coach.

Natchez finished tied for second in Region 6-5A this season and was the only team to beat top seeded Forest Hill during regular season division play.

Monday night, Natchez went on the road to Jackson County and knocked off Gautier High School (12-14) by a 44-36 final.

The Lady Bulldogs led 24-7 at halftime.

As BHS has gelled over the season they’ve began to develop the type of depth that championship teams must have.

Senior Lulu Cook is an outside shooting threat that also averages 5.4 rebounds per game and fellow senior Jayla Henry has provided valuable bench minutes all season.

It’s the emergence of some younger Lady Panthers that has allowed coach Preston Wilson to keep his foot on the pedal defensively — even when his senior leaders are on the bench.

Sophomore guard Aniyah Cook and freshman guard Alexis Kelly are the ball handlers of the future and have grown throughout the season when Louis goes to the bench.

A win over Natchez would move BHS to the third round, which is in the first year of a totally revamped system.

The third-round game are the state quarterfinals and those have been moved to neutral locations — two in the north and two in the south. The 1A, 3A and 5A quarterfinals will play at White Coliseum on the campus of Pearl River Community College in Poplarville. The 2A, 4A and 6A quarterfinal games will take place at the same time at the Mississippi Gulf Coast Coliseum in Biloxi.

The north half games will be played at Itawamba Community College in Fulton and Mississippi Valley in Itta Bena.

All semifinal games will be played at the Mississippi Coliseum in Jackson and all of the state championship games will be held in the Pavilion at Ole Miss.

Just as in the girls’ game, there is plenty of familiarity between BHS and NHS in the second game of the night.

Like their girls the night before, Natchez went on the road to Jackson County Tuesday and picked up a road win in the opening round of the playoffs. The Bulldogs held of Pascagoula (16-13) for a 63-58.

As they have been all year, Natchez was paced in the win by their senior duo of KeDarius Stampley and James Singleton.

A rebuilding year for BHS and coach Marcus Flippin has had its share of ups and downs. Senior guard Jermario Hersey has battled injuries and missed multiple games this season.

Senior forward KaDarius Wells has also recently been on the shelf with an ankle injury suffered against South Jones late in the season.

The Panthers have also battled inexperience as some of their upperclassmen — Piedro Wilson and Caleb Edwards — stepped into larger roles this year. Also, a trio of sophomores — Elijah Kennedy, Demeriuntia Jackson and Daeton Davis — have played major minutes as ball-handlers in their first varsity season.

Through it all, though, it appears that BHS is playing some of its best basketball of the season when it matters the most.

Senior guard Johntavious Wilkerson has stepped up his scoring output as he posted 14 big points in a 47-45 win over Laurel in the region championship game.

Six-foot-5 sophomore Anthony Sanders has come on in the absence of Wells to give BHS more depth inside.

Junior guard La’Darius Thrasher was a man on-fire in the region tournament last week — scoring 35 points in a win over West Jones and 18 in the victory over Laurel. Thrasher is averaging 19.1 points and 5.4 rebounds per game on the season.