Bulldogs’ 1-2 punch too much for Panthers 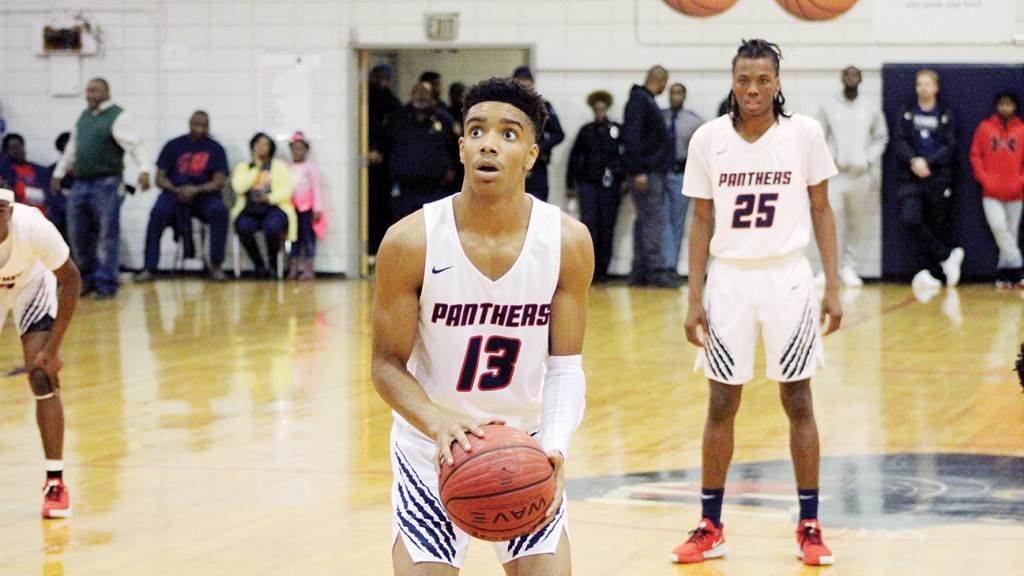 Photo by Clint Furr Sophomore guard Elijah Kennedy went five-of-five from the free throw line Friday night against Natchez on his way to scoring 14 points in a 72-63 loss to Natchez.

The Natchez High senior duo of guards KeDarius Stampley and James Singleton combined for 52 points Friday night in a 72-63 win over Brookhaven High in their MHSAA 5A second round playoff matchup.

Natchez High (16-11) coach David Haywood — a NHS alum and former USM standout — responded by putting his team into a three-quarter court trapping defense that had changed the complexion of the game.

Singleton — a recent Co-Lin football signee — hit a long 3-pointer and then the press provided Stampley with a breakaway layup. Another steal due to pressure earned Singleton a three-point play as the Bulldogs were in the midst of a 15-0 run.

A 3-pointer by BHS junior guard La’Darius Thrasher just before the first quarter horn cut the NHS lead to 19-16 after the first eight minutes of action.

The southeast corner of Sinclair was packed with Natchez fans as they made up close to a quarter of the crowd. Those blue and gold wearing faithful were all brought to their feet in the second quarter when Singleton drove through the BHS defense and cocked back for a powerful slam off the dribble.

The Ole Brook fans would get something to cheer about though on their next possession as BHS senior Jermario Hersey answered with a dunk of his own.

The game was one of high emotions as the teams are longtime rivals after previously playing in the same region for a number of years. Hersey would get two technical before the end of the game and Natchez was also called for one technical on the night.

With NHS holding a 36-30 lead at halftime, one could feel that the first three to four minutes after halftime would be the deciding factor in the game. The pressure was on BHS to keep it close and not let the lead grow to now more than two or three possessions.

Natchez came out and reeled off five straight points to begin the quarter, forcing BHS head coach Marcus Flippin to call a timeout with his team trailing 41-30.

The end of the third quarter saw Natchez leading 53-46 and the Bulldogs started the fourth quarter off with another run — this one a 4-0 burst — to grow their lead even more.

However, Panthers came alive in the fourth quarter.

Thrasher and sophomore guard Elijah Kennedy began to attack the NHS defense with drives to the basket.

The lead shrank down to 59-56 with 3:36 remaining, but the BHS comeback effort would soon run out of steam.

Offensive rebounds hurt the Panthers all night as their senior forward KaDarius Wells was still severely limited by a lower leg injury that had kept him out the previous two weeks. BHS was also without senior shooter Peidro Wilson who was too banged up to dress out.

Stampley — a Pearl River C.C. signee — got his own rebound off a miss and scored the put-back to give his team a 61-56 lead.

The Panthers then stopped taking the ball to the goal and shot long 3-pointers on their next several possessions. Natchez secured those rebounds and made their late-free throws to end the comeback attempt and the game.

“We hurt ourselves with how we started the second half, but I’m proud of the way we fought back in the fourth quarter,” said Flippin. “Some of our young guys grew up over the course of the game with how they handled their pressure.”

Natchez moves on to face Wingfield (21-11) in the 5A quarterfinals. The two schools were in the same region this season with WHS winning two of their three previous meetings this season.