Britt headed to run for the MC Choctaws 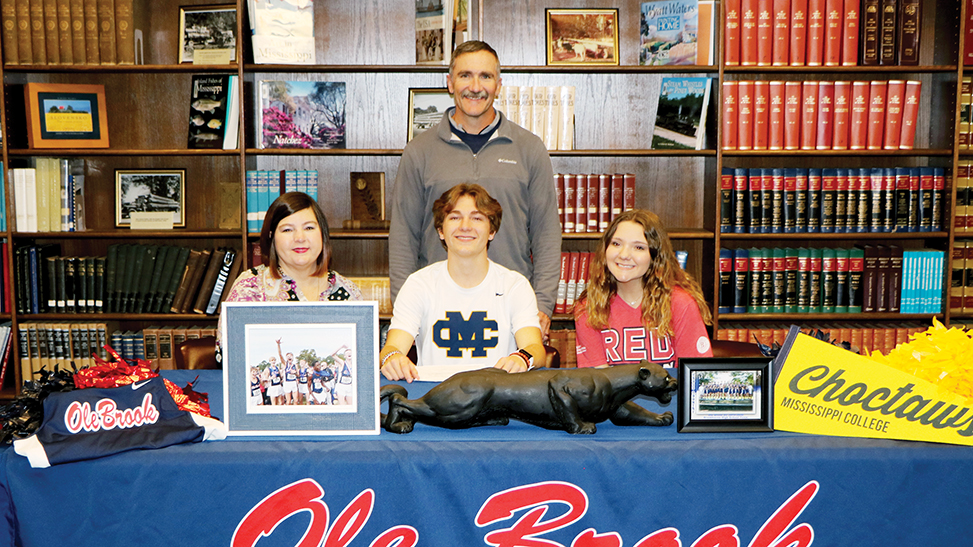 Photo by Leslie Davis Brookhaven High senior Jacob Britt signed a letter-of-intent Thursday in the school library with Mississippi College. A cross-country and track state champion, seated with Britt are his mother Leslie and and sister Sydney Kay. Standing is his father Jason.

It’s appropriate that Britt is going to be a Choctaw after having some of his greatest moments as a high school athlete on Choctaw Trails.

That’s where Britt finished third overall in the 2019 MHSAA 5A state cross country meet. His strong finish and those of his teammates was good enough to give the Panthers the state title, their second in three years.

A fixture in his training runs through the streets of Brookhaven with his teammates, Britt was one of the top 5A runners in the state throughout his senior season.

“Jacob is a great team leader,” said BHS coach Shannon Knott. “He has a great work ethic and is someone you can always count on.”

When he visited the MC campus in Clinton Britt realized he’d found his new home.

“I loved how inclusive the school is,” said Britt. “The classes are small, so you really get a good education.”

The Choctaws compete at the NCAA Division II level. At the end of their 2019 season longtime coach Butch Ard stepped down as leader of the cross-country and track programs.

Assistant coach Matthew Reneker is leading the team now. Last season only five of the 16 team members were Mississippi natives.

“Coach Reneker is amazing and he really cares about his guys and the incoming recruits,” said Britt.

For some they’ve always known where they want to go to school, that wasn’t the case with Britt, but he’s all in for Mississippi College now.

“MC wasn’t always were I wanted to go, but after I visited and met the guys on the team and the coach it was like a dream come true,” said Britt.

Britt is now competing for the BHS track team — he’s the defending 5A state champion in the 3,200-meter race. He’ll also run track while at MC.

You’ll still see Britt and the current BHS cross country team logging miles through the streets of Brookhaven. One day they’re on Union Street running in single file and the next they’re on Church Street — running five-wide.

You may also notice the same guys working on their skateboarding skills downtown.

Britt happily admits that his running skills far outpace his efforts as a skater.

“My skateboard skills are average in my opinion,” said Britt. “It’s way harder than running because you’ve got to keep your balance and it’s so unnatural compared to running — which just comes naturally.”