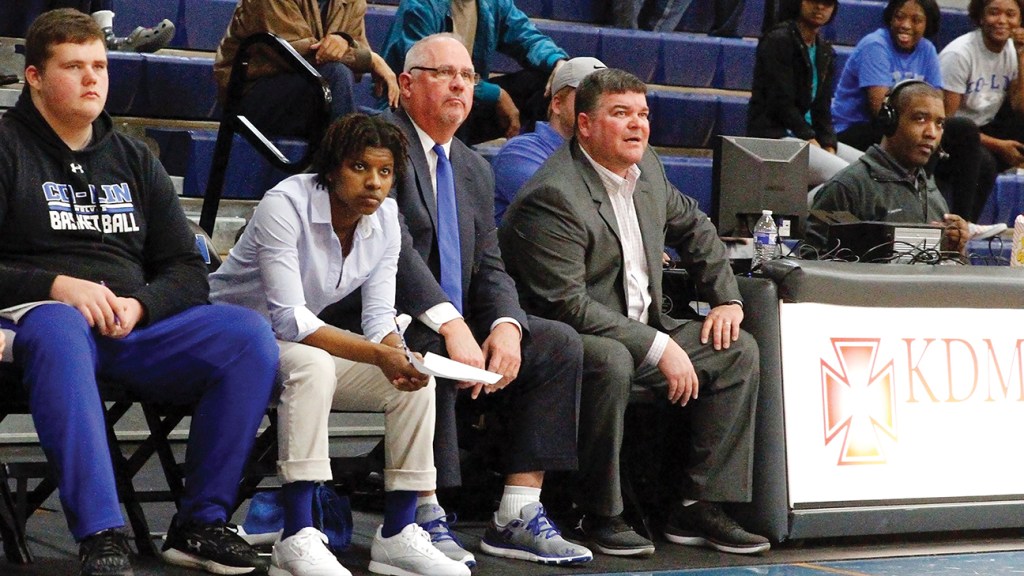 Photo by Co-Lin Sports Information The Copiah-Lincoln coaching staff of assistant Arnissayur Robinson, head coach Gywn Young and assistant Lane Young have seen their share of ups and downs this season as the Lady Wolves head into the region tournament next week.

The season isn’t over yet for the Copiah-Lincoln Lady Wolves basketball team. After failing to qualify for the state tournament that took place this week Co-Lin gained a berth in the NJCAA Region XXIII tournament in Clinton.

Co-Lin will play Jones College at 5 p.m. on Wednesday in A.E. Wood Coliseum on the campus of Mississippi College.

Thursday night East Mississippi (24-2) beat Jones (21-4) 87-73 in the MACJC state tournament finals. The game was played at EMCC in Scooba and took two overtimes to decide.

Win the MACJC championship and you get a gold ball and bragging rights. Win the Region XXIII tournament — which also includes one or two schools from Louisiana — and you get a plaque along with a berth in the national tournament in Lubbock, Texas.

The shelves in CLCC head coach Gwyn Young’s office in Mullen Gymnasium are filled with titles — both the gold balls and the region champion plaques.

Young is in year 44 of leading the Lady Wolves. He’s literally seen it all in his career — from calling recruits on their house-phones to now using text messages — Young has always adapted to the times.

He’s had few years though in which his team battled injuries like they have this season.

“We’ve had games this season where we’re missing two starters and the first backup because they’re all hurt,” said Young. “A guard and a forward or two guards. It’s been a little bit of everything. When they get healthy there’s also a time period where you’re trying to work them back in and mesh everyone back together.”

At the Christmas break CLCC was 7-1 with their lone loss coming at region opponent LSU-Eunice (20-6).

They came back from the holiday with close losses to Texas based national power Trinity Valley (28-1) and Kilgore College (21-8).

They then beat Mississippi Gulf Coast 49-42 — giving MGCCC their first loss of the season at that point.

Things took a turn for the worse after that though the Lady Wolves lost five out of their next six MACJC south division games.

“It’s been an up and down season,” said Young. “We’ve shown we can beat anybody, but at the same time we can be beaten by anybody. That’s been how our league has been this season as a whole.”

Meridian was the only team to sweep Co-Lin in their two regular season meetings and Co-Lin in turn swept Gulf Coast. They split their matchups with Pearl River, East Central, Southwest and Hinds.

They also split with Jones. On January 27 in Ellisville Jones blasted Co-Lin 81-56. Fast forward to sophomore night and the regular season finale just over a week ago on February 20.

The Lady Wolves were healthy and hungry as they beat JC 71-68. The win broke a 13-game win streak for the Lady Bobcats and was their first defeat by a college from Mississippi since February 11, 2019.

Young expects Jones to bring a big-time effort when the teams meet on Wednesday.

“They’ll have their stinger out for sure,” said Young. “In the second half we rebounded well against them and did a pretty good job of defending their perimeter shooters. We’ll need to do that again.”

Co-Lin has an overall record of 13-10 and despite what happens against JC, they’ll finish with a record above .500.

When was the last losing season for the Lady Wolves?

Ronald Reagan had just been sworn into his first term, the Iran hostage crisis ended, MTV launched and I was born.

All that and Co-Lin finishing with a 7-16 overall record happened in 1981.

Soon after the MACJC began allowing out-of-state recruiting and Co-Lin was 30-2 by 1985. Young has built a dynasty in Wesson.

How he’s not in the Mississippi Sports Hall of Fame is a complete mystery to me.

When William Carey coach Steve Knight was enshrined in 2015 the releases touted him as the “winningest college basketball coach in Mississippi history.”

Young is approximately 45 wins away from his 1,000th career victory. He’s won eight state titles and seven region tournaments. He’s in the Mississippi Coaches Hall of Fame and the NJCAA Women’s Basketball Hall of Fame.

Tanya Tucker released a song last year that got her lots of acclaim. It was titled “Bring My Flowers Now.”

Young isn’t done, but it would be right if the Hall of Fame honored him while he was still coaching, like they did with Knight.

Knowing him and how much he loves the minutia of practice, scouting and preparing his team — he’ll keep going long enough to reach 1,000 wins.

The Mississippi Sports Hall of Fame is an exclusive institution. As it should be with a state that has such rich tradition in athletics.

That said, Young deserves to be in sooner than later. Even in a down year, his Lady Wolves are good enough to beat anyone and that’s been the case since he took over at CLCC in 1975.