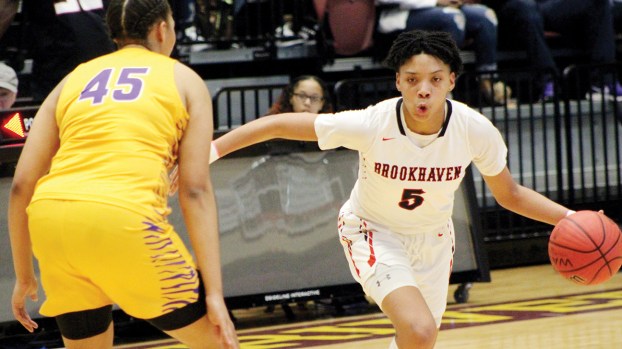 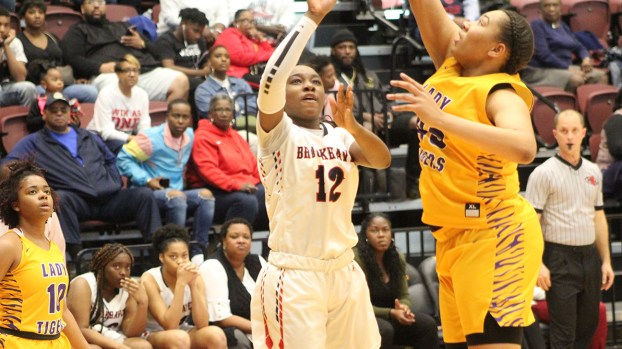 Photo by Cliff Furr Freshman forward Angel Wilkinson goes up for a layup Saturday against Hattiesburg. Wilkinson was one of four Lady Panthers in double digits with 10 points. 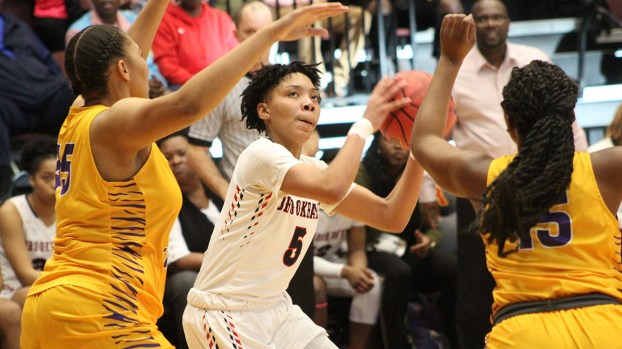 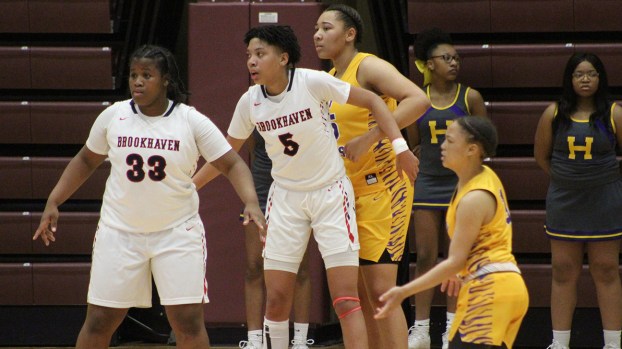 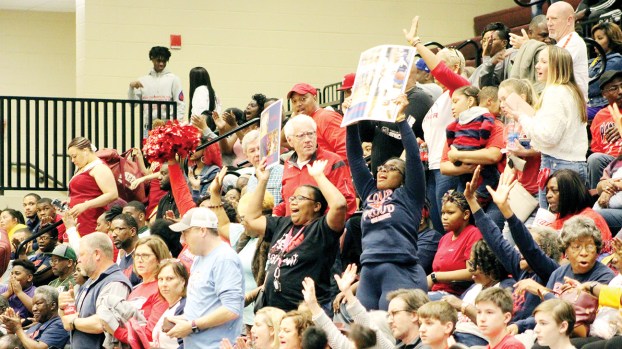 Photo by Cliff Furr Ole Brook fans react to the final horn Saturday as BHS moved on to play Vicksburg today in the 5A semifinals. 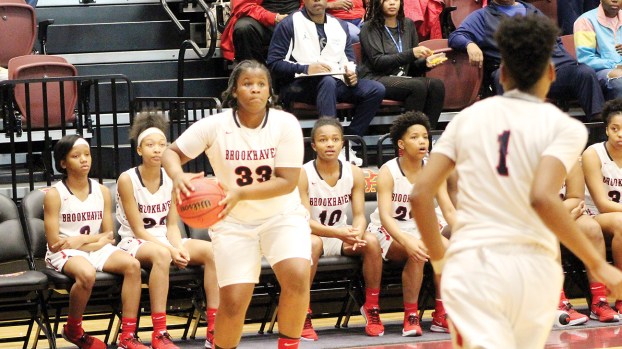 Photo by Cliff Furr Lulu Cook loads up to shoot a 3-pointer in the second half against Hattiesburg. Cook finished 5-of-7 from behind the arc Saturday.

“Feels good to get over that hump,” said a smiling Preston Wilson Saturday evening as he walked off the court inside Marvin White Coliseum in Poplarville.

The hump Wilson was speaking of is the quarterfinal round of the MHSAA 5A state playoffs. His Brookhaven High Lady Panthers didn’t just get past Hattiesburg Saturday — they routed the Lady Tigers 67-44 to roll into the semifinal round.

BHS plays Vicksburg High at 5:30 p.m. today in the Mississippi Coliseum with a state title berth on the line. After losing in the quarterfinals the last two seasons, it’s the deepest a BHS team has made it since the 2008 season.

Hattiesburg led 8-2 early but as BHS came back to tie the game at 8-8 you could see the Lady Panthers settle in offensively as they shot the ball in Pearl River Community College’s arena like they were back home in Sinclair Gymnasium.

Ole Brook led 15-14 after the first quarter and began to heat up from deep in the second eight minutes.

Cook flung up back-to-back 3-pointers that were then followed by a 3-pointer by Collins that put BHS up 27-18.

During that run, Hattiesburg center Melyia Grayson went to the bench with a gimpy ankle as BHS roared on a 14-0 run.

Grayson — a 6-foot-2 Southern Miss signee — finished with 20 points but was stymied at the rim all night by a great defensive game plan.

“We fronted her with Collins and had our backside defenders giving heavy help her way,” said Wilson. “I thought we did a good job on most every trip getting to our spots in that regard.”

Collins — an Ole Miss signee who had her future coach Yolett McPhee-McCuin watching her courtside — was able to steal several passes that Hattiesburg guards tried to pass over her to Grayson.

Just before halftime, Collins had a sequence that BHS fans have come so accustom to as she took over a stretch of the game with her ball-skills.

She skied for a rebound, drove the length of the court and as the defense broke towards her hit McNairy for a layup.

Collins then hit another 3-pointer. The next possession might have been her highlight of the night as she stole a pass and then used a cunning euro-step to get past a HHS defender for a reverse layup.

The next trip she again led the break and dropped a dime in the short corner to Wilkinson that was the final BHS basket of the half as the Lady Panthers led 36-20 at the break.

Collins finished with 14 rebounds and 10 assists to earn a triple double. She also blocked seven shots.

Cook would hit another 3-pointer in the third quarter that put BHS up 48-24. Collins says teams take her senior teammate lightly because she doesn’t look like a typical long-distance shooter.

“They think she can’t shoot, but then when it goes in they realize they’re wrong,” said Collins.

When a shot does splash down from deep, you can expect the loyal BHS fanbase to jump to their feet every time. Cook says the Lady Panthers draw energy from their biggest fans.

“It makes you feel good to hear our fans cheering,” said Cook. “We know they’ve got our back.”

The chemistry that BHS has is easy to see. They share the ball and know that everyone is going to get their touches and looks at the basket.

“We’re a group of sisters,” said McNairy. “We fight like sisters sometimes, but we work it out like family. We’re a close team.”

Collins can sum up that chemistry with one word.

“Trust,” said Collins. “We trust each other on and off the court.”

Up next is a matchup Tuesday night with a Vicksburg — a team BHS beat 63-61 in Warren County on February 7.

Vicksburg, (20-10) got 16 points apiece from Destini Smith and Karmen Davenport in that loss. Wilson says slowing down the Missy Gators on the dribble will be a key for his team.

“Vicksburg has a very well-coached team,” said Wilson. “They’re very good at penetrating and getting into the paint. That’ll be key for us defensively.”

VHS — coached by Troy Stewart —beat Neshoba Central 42-36 in their quarterfinal game. Neshoba led 23-12 at halftime before Vicksburg owned the second half.