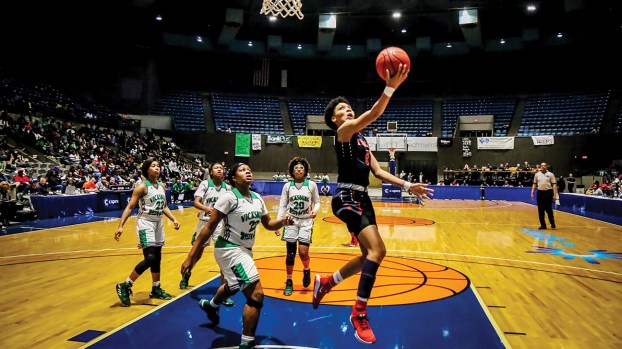 Photo by April Clopton Brookhaven High senior Snudda Collins glides past the Vicksburg defense for a reverse layup Tuesday in the 5A semifinals. Collins scored a game-high 17 points in the win. 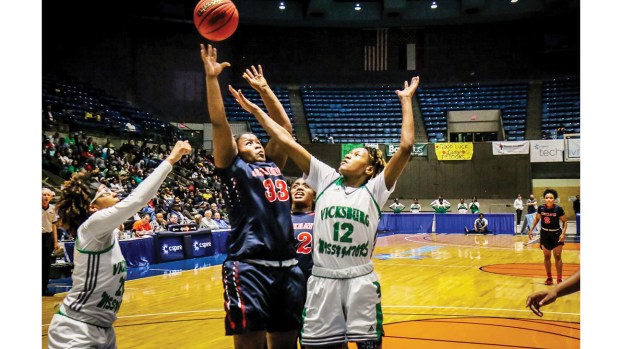 Photo by April Clopton Lulu Cook grabs an offensive rebound and goes back up with it over junior Yakia Burns of Vicksburg. A senior forward, Cook posted a double double with 15 points and 11 rebounds for BHS.

You could see relief in the faces of the Brookhaven High Lady Panthers — players and coaches alike — Tuesday as they went through the post-game handshake line.

After building a 20-point second half lead, BHS (28-3) held off a Vicksburg High (20-11) comeback attempt and captured a 56-46 win in the MHSAA 5A state semifinals at the Mississippi Coliseum.

Friday in Oxford, the Lady Panthers will take on Columbus High (25-4) in the 5A state title game at Ole Miss.

For much of the season, Brookhaven has been the favorite to come out of the south division while the Columbus Lady Falcons carried a similar mantel in the north.

Vicksburg was no cupcake for BHS to get past though. The Missy Gators lost a one-possession game to Ole Brook just a few weeks ago and Tuesday they had their moments stifling the Lady Panthers.

The start of the game was all Brookhaven as 3-pointers by Lulu Cook, Ashanti Louis and Snudda Collins had Vicksburg in an early 11-1 hole.

A change that extended his half-court zone defense got VHS coach Troy Stewart’s team back into the game.

The Lady Panthers struggled with communicating past the trap and by the end of the first quarter Vicksburg had cut the lead to 17-15.

The Missy Gators took their first lead at 18-17 as they were good all night at getting the ball down the court in a hurry.

Leading 28-24 with 7.5 seconds remaining in the first half, BHS got a big shot from their leading scorer that provided them with surge of momentum.

A ball batted out of bounds provided BHS a sideline inbounds in front of their basket. The Lady Panthers lined up in a stacked formation — going all the way to half-court to set up.

If they could do it over again, Vicksburg wouldn’t have guarded BHS that far away from the basket.

With all the open space, Collins made a cut in front of Louis, received the pass and launched an off-balance corner 3-pointer that splashed down to give her team a 31-24 lead as the halftime horn sounded.

“I realized we were too far out when we started lining up, we were closer to half court than the three-point line,” said Collins. “Once I realized they had come out there with us I knew that if I could get in front of my defender I was going to the corner for a three.”

Collins had 11 points at halftime.

The green and white clad Missy Gators didn’t give up the fight though. They were especially good at denying Collins touches for long stretches. They also face-guarded senior Ayanna McNairy which left their other three defenders in a triangle formation.

“We figured we’d seem them run a box-and-one on us, but we hadn’t prepared for a triangle-and-two,” said BHS head coach Preston Wilson. “We made adjustments in the game to respond to it, but our biggest adjustments came at halftime and how we were handling their defensive pressure at half court.”

Five straight points after half — a Cook 3-pointer and a Jayla Henry basket — had Stewart and VHS calling a timeout.

Both Collins and Cook had their moments offensively in the second half as it appeared that BHS had found their comfort zone shooting on the foreign baskets of the coliseum floor.

Early in the fourth quarter, BHS led 49-29 but Vicksburg kept their effort high to cut into the lead late.

BHS struggled to make free throws in the fourth quarter that could have kept their lead larger — they finished 11-of-23 on the night from the FT line.

The team celebrated with their fans, families, teachers and administrators after the game — but getting to the state championship game has been the plan all season long.

“We’re happy to be in this position,” said Collins. “It shows that all our hard work was for something, but we’ve still got one more we want to win.”