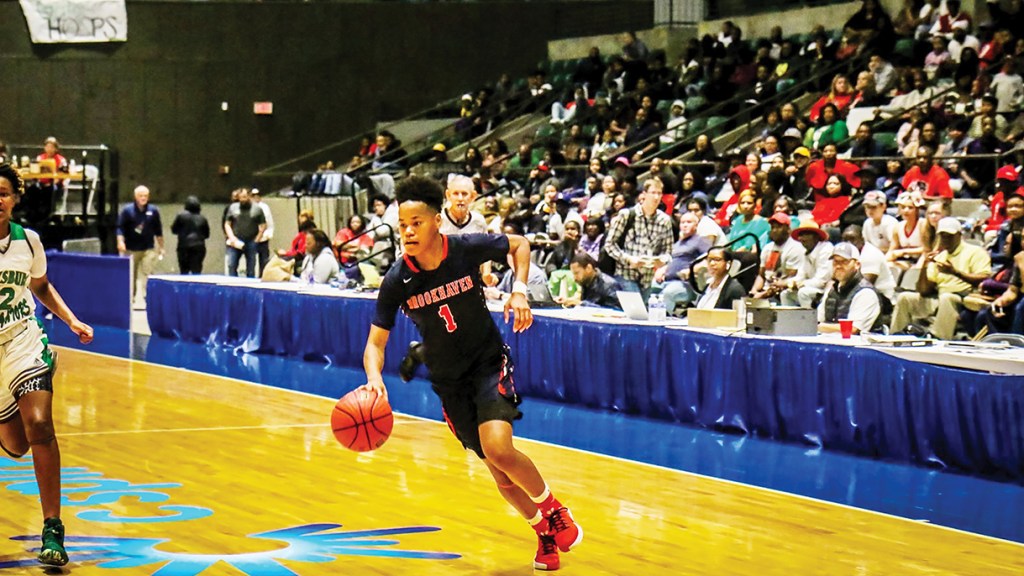 Photo by April Clopton Brookhaven High senior guard Ayanna McNairy and her team hope to complete a dream season tonight with a win in the 5A state championship against Columbus High.

If the Brookhaven High Lady Panthers (28-3) are to win their first state basketball championship since 1984, they’ll have to go through a Columbus High (25-4) team that’s been hot this postseason.

The two teams meet today at 5 p.m. in The Pavilion at Ole Miss for the 5A state title.

Last season, Columbus finished 23-5 as a 6A school. After dropping down a classification this year they dominated Region 2-5A.

Coach Yvonne Hairston and her team have been especially suffocating on the defensive end. They’ve only allowed an opponent to score more than 50 points twice all season and both of those games were losses.

They also dropped a 54-47 defeat to Florence (Alabama) and a 35-34 upset loss to New Hope in the region tournament championship game.

During the regular season CHS beat their county rivals from New Hope 62-17 and 49-33 before losing their third matchup.

BHS and Columbus do have a couple common opponents — one of them being Holmes County Central.

Due to the upset loss in the region finals Columbus had to play Provine in the opening round of the playoffs instead of getting a bye. They whipped the Lady Rams 66-32 to set up a second-round matchup with Holmes County Central.

Behind the strength of the Saddler sisters Columbus was able to squeeze past Holmes County Central 48-44.

In the quarterfinal round Columbus matched up with another serious 5A contender in Lafayette County (21-6).

That game played at Itawamba Community College came down to the wire.

With 1.2 seconds left Aniya Sadler hit a floater that broke a 36-all tie and sent her team to the semifinal round in Jackson.

The pace of that game was slow as Columbus uses a zone defense that eats up space in the paint. Using a combination of active hands and quick feet, Columbus shuts down penetration to the basket.

BHS coach Preston Wilson got to see that zone in person Tuesday night as he scouted Columbus in their 57-29 win over Laurel.

Mashanti Saddler missed the Laurel game after suffering an injury against Provine. She was on crutches Tuesday on the bench.

Expect the teams to feel each other out early. Brookhaven will test Columbus with some full-court pressure and see how their ball-handlers respond.

Columbus will likely start out in a zone and try to push BHS away from the basket.

Brookhaven rarely attempts more than 20 3-pointers per game, but they’ve used the long ball to give their offense a lift all season long and usually keep teams from staying in a zone-look for too long.

They were just 5-of-20 from the 3-point line Tuesday against Vicksburg, but Snudda Collins and Lulu Cook both made long shots late in stretches of the game when a basket was badly needed.

The best, easiest way for Brookhaven to score is by throwing the ball ahead off turnovers and misses that lead to transition buckets.

Junior point guard Ashanti Louis always has her head up looking for a player to outlet a pass to. Collins and McNairy both run their lanes well and fellow senior starter Jayla Henry has solid hands and stays around the basket.

That part of the BHS offense didn’t get much play against Vicksburg though. The Missy Gators had athletes that could cover great distances in a flash and they batted away passes all night that BHS is accustomed to getting.

Tuesday night after beating Vicksburg, Wilson was already thinking about the title game tilt with Columbus that was ahead of his team.

“We’ll see how they handle the pressure and then adapt after that,” said Wilson of Columbus. “They’ve got a good team — an impressive looking team. We’ll use these next couple days of practice to prepare and then we’ll give them our best shot.”