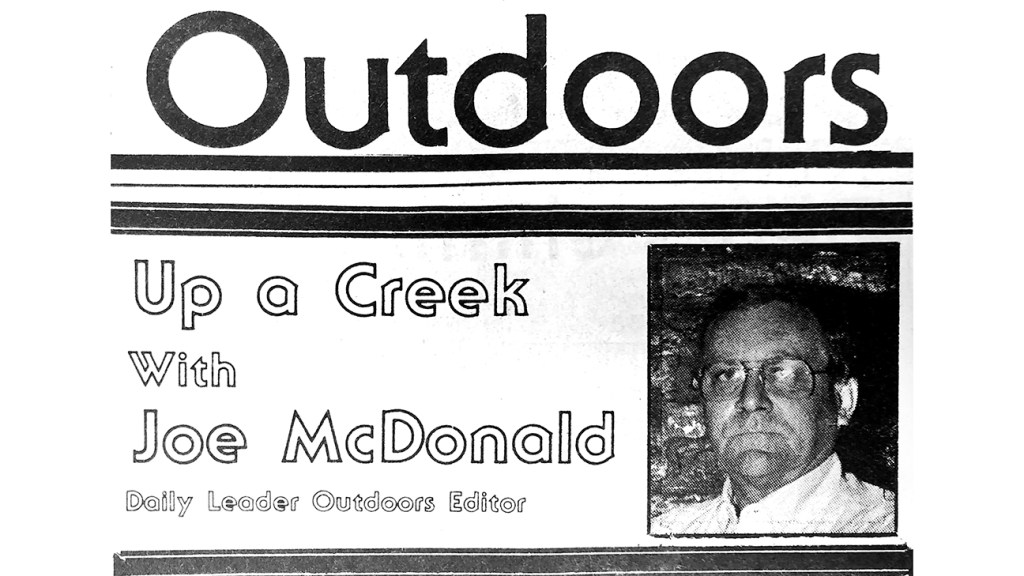 Daily Leader file Joe McDonald was outdoor editor for The Daily Leader in 1988, when his column “Remembering a good idea ...” was written.

This is part of our series looking back looking at stories from The Daily Leader archives.

Growing up as a boy who liked to read the newspaper, I feel especially blessed to have been able to read the different journalists who influenced me during my formative years.

I was a devoted follower of the columns of Rick Cleveland and Orley Hood as they wrote about sports and culture for their paper in Jackson.

Joe wrote about the outdoors with whit and humor. He passed away in 1998.

His son Sam is the pastor at Faith Presbyterian. I asked him what Joe would make of the times we’re currently living in.

“Man — good question — my guess is he’d find humor in all the articles that recommend common sense behaviors,” said Sam. “He always hated getting obvious advice — like a weatherman telling you to be sure and take an umbrella.”

The following Joe McDonald column is republished in its entirety. It’s not a March column, it was published on Feb. 25, 1988 — but it felt timely all these years later.

Joe’s talking about being bored. Having a lot of stuff to do, the time to do it but lacking the care to get any of it done.

He quotes a book passage that mentions how March is a month that’s filled with nothing to do. Oh, if you could see us now Joe. He then closes with a long portion of text from that same book, “The Old Man and the Boy.”

I will by honest with you — I don’t know what to do with my free time these days.

The gun hunting seasons are essentially in the past now, except, of course, turkey hunting, and it’s still in the future.

Right now I am considering the options available to me for the weekend coming up.

There is fishing. But I’m not the truly dedicated type, so the air still has a little too much chill in it for fishing to be comfortable.

I must be comfortable if I am to enjoy fishing, because relaxation is the only prize I ever really expect to catch. If I have to wear a coat and gloves and ear muffs I am not comfortable near the water.

So, fishing is out for me until the Dogwoods are in bloom.

What about fox hunting? The idea is appealing but I’m not sure if my dog could meet the challenge.

His voice has the strength and volume. On a windless night you can hear his bark for at least five blocks away, maybe more. And it is no problem for him to bark steadily for 10 straight hours. I think he could beat that if the nights were longer.

He has speed enough to run a fox. I’d bet on him in a race with a deer — he’s that fast, or so it seems when he digs under the backyard fence and I have to run him down in the neighborhood before leaving for work at 7 in the morning, when it is raining.

He might have some trouble getting over logs and brush tops or across creeks on a chase because his legs are only about eight inches long.

Being of the Pekepoo breed, too, might cause him some difficulty in being accepted among a pack of Walker hounds; and a single dog running a fox is not very thrilling.

Fox hunting, then, is out of the question.

There are always the chores around the house, the ones I abruptly discontinued last September when dove season opened.

Leaves still need raking and it wouldn’t hurt the grass if I spread some fertilizer and lime. But the leaves will eventually wash off, and fertilizer would only make the grass grow so fast that I wouldn’t be able to keep up with the mowing, which comes with the fishing season.

I could prune the trees and trim the hedges. But the trees are about to break dormancy and start growing and pruning at the delicate time could throw them into shock.

And everybody knows you don’t trim hedges until they’ve put on their new spring growth, because you would be wasting time and effort since you would have to time them again to clip off the new growth.

Of course, there is weekend basketball on TV. Both college and professional games will be on nearly anytime you flip on the set. With cable, you sometimes can get a game at four in the morning, the very time you’ve accustomed to waking to go deer hunting.

But once you’ve seen Michael Jordan win the dunking contest and Larry Bird win the long-shot competition, what left to see?

What, then, is left for me to do? Read, that’s it. My March issue of “Field and Stream” has arrived. I pick it up, fan the pages in preview of the contents, then place I back on the desk. How many different ways are there to kill a turkey, anyway?

Besides, “Field and Stream” writers are more concerned with being experts dishing out advice than telling interesting stories. I don’t trust experts anyway.

My definition of an expert is someone who knows 370 different ways to make love but doesn’t even have a girlfriend.

I suddenly remember a line from the book, “The Old Man and the Boy,” by Robert Ruark.

“March,” the Old Man said, “is a fine month for remembering. I suppose that’s because there is really nothing else you can do in it. Don’t ever let anybody tell you that getting old happens in the autumn of your life. It happens in March.”

…And we came to a clump of trees along the edge of the cotton fields and he said this would be a good place to take a brief rest.

The ground was soaked and water dripped off the needles of the pine, but it was comforting just to sit and lean against a tree. He sat near enough that I could smell the peculiar scent of freshly killed quails in his game sack. I had smelled the scent many times before, but this time I was a part of the hunt and somehow that made the scent different, though it was the same peculiar odor of wet feathers and warm blood and gunpowder and stale tobacco.

It was, I supposed, a scent of death, though I had never thought about it that way. I think I associated the scent with security, for usually when I had smelled it was when he would wrap his arms about me, drawing me tightly into his embrace, as I ran to meet him returning from a quail hunt.

He did not speak as we sat under the pine. He just sat on the wet ground beside me, near me, and stared across the colorless field of rotting cotton stalks.

The mist had become heavier in the mid-afternoon and would now wet our clothes and drip off the tree needles as if a drizzle of rain. Soon, I surmised, the gray mist would turn into a steady rain.

A squirrel stirred in the damp needles not more than 20 yards away and I though how easy a shot it would be with the 20-gauge single barrel, but I quickly forced the idea from my mind because this was not squirrel season and he dared not allow anyone to shoot an animal not in season, especially me. But I had wanted to shoot the squirrel because I had not shot a single quail that afternoon.

I wondered if he was as tired as I was. We had crossed half a dozen fields already, he saying, “just one more field.” I doubt that we had walked more than five miles, but it has seemed more like a hundred. But I was only tired.

I looked over at the squirrel again, then back in his direction again, and he was standing. I rose to my feet and waited for the signal.

“Here, you wear this for a while,” he said handing me the game sack. I had not shot any of the quails held in the wet sack, but having it slung about my neck somehow made me feel accomplished. It was the first time he had let me carry the game sack.

“Let’s try just one more field,” he said, and I followed his footsteps across the rows of last year’s cotton crop. Yellow locks of lint still clung to some of the rotting bolls. Behind us, the clump of trees faded behind the gray thick curtain of mist.

Suddenly we could see Sandy frozen on point. She was like a statue carved in white and brown stone. “You take this shot,” he said. I shook as I steadied the 20-guage against my shoulder. I’m not sure the shaking was because of the excitement over a covey about to get up, or out of fear I would miss when they fluttered into flight.

“Steady does it, easy now,” he said, though I didn’t know whether he was speaking to me or the dog.

Then there was a sudden eruption and an eerie rushing sound as the covey flushed. It happened so quickly that I couldn’t think, but almost instinctively I could remember his little lesson: “Don’t shoot the covey, but pick out one bird to shoot.”

I fired but saw nothing drop. I aimed at one particular bird, but I suddenly wondered if it would have been a better shot had I fired into the covey.

Sandy came running up to me, carrying a quill in her mouth. I didn’t know whether he had also shot. I seemed to have been stupefied in the burst of excitement.

“Sandy brought it to you, didn’t she?”

The smell of the game sack now seemed stronger as I tossed in my first quail, I felt more rested.

“You about ready to head home?” he asked.

I think I will re-read “The Old Man and the Boy” this coming weekend.