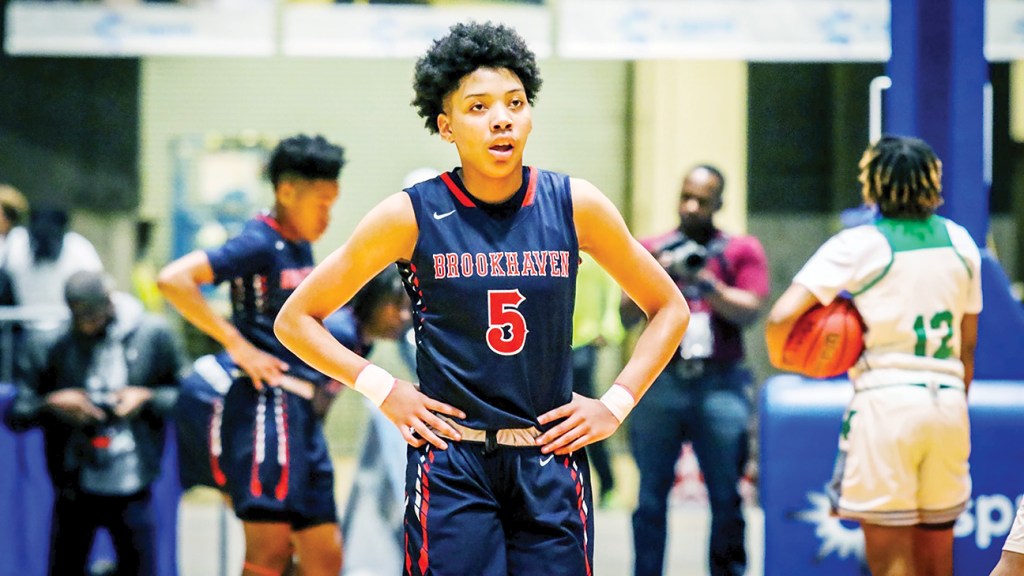 Shame, shame, shame — shame on you if you never saw Silentianna “Snudda” Collins play in person during her time balling for Brookhaven High School.

The senior guard is off to Ole Miss next where she’ll be a big part of the rebuilding job that Rebels coach Yolett McPhee-McCuin is working on in Oxford.

Collins lived up to every expectation during her final year in Sinclair Gymnasium — averaging 18.6 points, 7.4 rebounds, 2.7 assists, 2.0 blocks, and 1.7 steals per game for coach Preston Wilson and the Lady Panthers (28-4). For her outstanding play Collins has been named The Daily Leader All-Area Most Valuable Player for a second consecutive season.

She leaves 443 East Monticello Street after leading BHS in scoring for the last three seasons.

The thing that Collins did so well as a senior was elevate her game while also making her teammates better.

A player as offensively talented as Collins could have put up bigger scoring numbers. She could have taken more shots and averaged more points.

Opposing defenses were designed to slow her down though and that meant more open shots for her teammates as Ole Brook kept the ball moving in their half-court offense.

If things were tight late, though, Wilson would call for an isolation for Collins. The other four Lady Panthers would spread out — flat along the baseline as they drew their defenders as far away from Collins as possible.

Dribbling the ball low, the 6-foot-1 Collins would bend over and look down at her defender. She’d often set up to go to her left hand and then — just inside the 3-point line she’d cross it over to her right.

After that there were a couple of options — sometimes she’d go back to her left and toss up a soft free-throw line jumper. Or she could keep going to her right hand and go up and over the defender with a layup.

A weapon she added to her bag of tricks this season was a smooth, gliding reverse layup in which she’d flick the ball up behind her head just before her feet hit the ground.

Most nights she watched the fourth quarter from the bench as her team won in blowout fashion.

The rise of the BHS program is one that mirrors Collins time on the team.

As a freshman, Collins and her backcourt mate Ayanna McNairy both appeared in 27 games each for a BHS team that finished 14-14.

The Lady Panthers finished 6-0 in their division that year and beat West Harrison in the opening round of the playoffs before being eliminated by West Jones.

The next season, Ole Brook improved to 24-7 before being eliminated in the 5A quarterfinals by Lafayette County.

Last season, the Lady Panther were nearly perfect in the regular season before losing to West Jones in the quarterfinals to finish the year 27-2.

This season saw Brookhaven make the 5A state championship where they were beaten 55-51 by Columbus High.

“She’s always been special, but when the playoffs started this year she really took it up another level,” said Wilson. “Even in the Mississippi/Alabama All-Star game she was one of the best players out there.”

Collins was MVP of Team Mississippi with 14 points in a 70-63 loss in the MS/AL All-Star game two weeks ago.

In a program with a long history of basketball success, Collins will go down as one of the best to ever lace them up for the Lady Panthers.

Catch her next season on the SEC Network doing the same type of stuff for Ole Miss — it’ll be a real shame for you if you don’t.