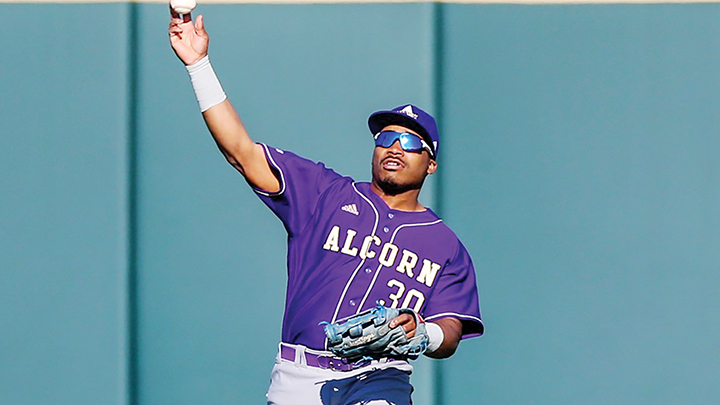 Alcorn State senior outfielder Travaris “T-Tez” Cole was named HBCU Player of the Year this week by Black College Nines — a website that focuses on baseball at historically black universities.

A Lawrence County alum, Cole was unstoppable in the 12-game season played by ASU before the Covid-19 pandemic.

He started every game and hit three home runs while driving in six runs.

Against Arkansas-Pine Bluff in SWAC play Cole had four hits including a grand slam as he drove in six runs. He had two or more hits four times and led his team in hits, homers, RBIs, runs scored and slugging percentage.

Cole had a .313 batting average when the season was prematurely ended. He homered in Oxford against Ole Miss as the Rebels beat Alcorn 9-8 in 10 innings on a walk-off home run.

As a junior Cole started 23 games but missed 22 with an injury. He finished second on the team with four homeruns and posted a .326 average at the dish.

A Southwest Mississippi Community College transfer, Cole hit .346 with 11 home runs during his two seasons in Summit for the Bears.

A two-sport star at Lawrence County, Cole was as good as anyone in the state with his bat during his senior season. He hit .563 with 13 home runs, 43 runs scored and 41 RBIs on 40 hits.

The Cougars were 25-1 in the regular season during Cole’s senior campaign.

The son of Wakeshia and Lenoriss Cole, he was just as good on the football field where he was selected to play in the Mississippi/Alabama All-Star game after his senior season.

As a linebacker Cole finished his final year of football in Monticello with 187 tackles (28 for a loss), five recovered fumbles, four forced fumbles and two sacks for an LC team that finished 13-2 on the season.