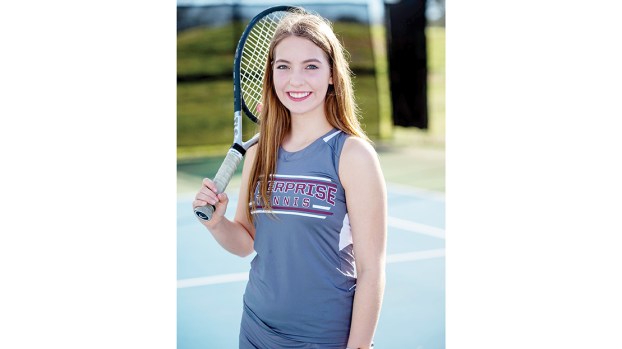 Enterprise tennis coach Karen Dunaway isn’t losing many players to graduation as she only has one senior on her roster. Dunaway says the hole left by that one upperclassman is a big one though, as Kathryn Brooks is a dream to coach.

Brooks is an outstanding student who is a member of nearly every honor society that Enterprise offers as she’s piled up awards and accolades through her high school career.

“Kathryn is an extremely hard worker,” said Dunaway. “She wants to be the best at everything she undertakes, not just tennis. I am heartbroken that her senior season was cut short, but she definitely still is a leader and captain of the team.”

The daughter of Kody and Brandy Burns, Kathryn plans to attend Copiah-Lincoln Community College and pursue a major in nursing. An honors graduate and class treasurer, Brooks has been part of EAC tennis for two years and was the team captain as a senior.

The West Lincoln tennis team has had much success over the last decade at the MHSAA 2A State Tournament. Fourth-year... read more