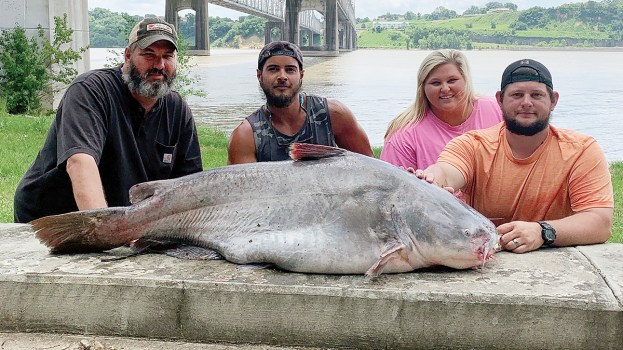 Photo submitted Shane Moak, Devon Pizarras, Shelby Smith and Larkin Smith pose with their winning catfish caught on a trotline this weekend near Natchez. The fish was 92 pounds when caught and 86.7 pounds when it made it to the official tournament weigh-in. That was good enough for first place in the third annual Memorial Day weekend trotline tournament put on by Lincoln County native Anthony Prather. Pictured are, from left: Moak, Pizarras, Shelby Smith and Larkin Smith. 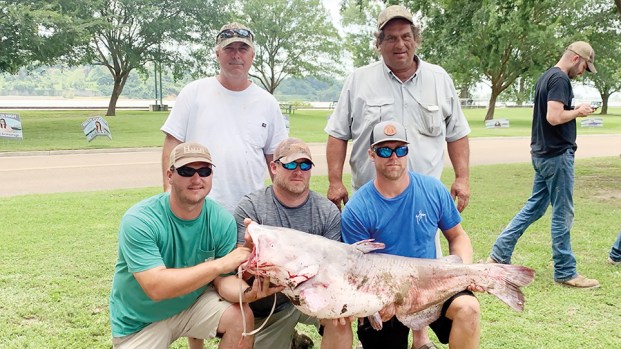 Photo submitted The second biggest fish of the weekend was a 75-pounder caught by Scotty Laird and his team. Pictured with the fish are, front row, from left, Jeremy Laird, Mark Case and Dustin Goldsmith; back row, Shane Douglas and Scotty Laird.

Lincoln County native Anthony Prather has done a little of everything as an outdoorsman. He’s caught a 13-foot alligator and killed deer and turkey most of his life growing up in Southwest Mississippi.

A recent tradition of running a trot line tournament on the Mississippi River might be the best time he’s had as a hunter and fisher.

The third annual tournament held over the holiday weekend saw a massive haul of catfish brought in by 14 different boats.

“This was our third year and it was the best yet,” said Prather. “We started with 10 boats the first year, 12 boats last year and we had 14 this year.”

There are a few simple rules laid down by Prather prior to boats being launched. Fishing begins Friday at daylight and ends Sunday at noon.

Each boat has a 250-hook maximum that they’re allowed to fish. They can fish as far as five miles north of Port Gibson and five miles south of Deer Park, Louisiana.

Everyone puts in at Natchez and the final weigh in occurs under the bridge on the Vidalia side of the river. All the fish are weighed on the same scale.

The entry fee is $150 per boat with first place getting 75 percent of that pot and second place taking the rest.

First place goes to the biggest fish while second is awarded to the boat with the highest average weight on their three biggest fish.

A true river monster was the winning fish this weekend for the team of Shane Moak, Devon Pizzarras, Shelby Smith and Larkin Smith.

They hauled in a blue catfish that weighed 92 pounds when they pulled it from the river. After sitting on ice for 24 hours it was 86.7 pounds at the official weigh-in.

“I’ve been fishing this river for most of my life,” said Prather. “I’ve got a camp over here close to some friends who love this type of fishing. Seeing a 90-pound blue cat come out of a boat will give you chills.”

The filet knives of every team were put into overdrive Sunday as they dressed their catches. There were 30 fish that weighed over 35 pounds each caught over the weekend.

Second place went to the boat run by Jimmy and Logan Francis. Their three-fish total was 151-pounds as they had three fish to weigh over 50 pounds each.

The second biggest single fish of the tournament was caught by Scotty Laird and his crew of Jeremy Laird, Mark Case, Dustin Goldsmith and Shane Douglas.

That team caught a 75-pound blue cat and had a total weight of 140-pounds for their top three fish.

Pictures of the massive pile of fish caught this weekend has had Prather’s phone buzzing with people wanting to join the fun next year.

“I’ve gotten calls and text from people I’ve never heard of saying they want in for next year,” said Prather. “It’s a lot of fun to get it all together and this year was the best one yet. I tell people that next Memorial Day and every one after that — Lord willing — we’ll be out there running lines.”