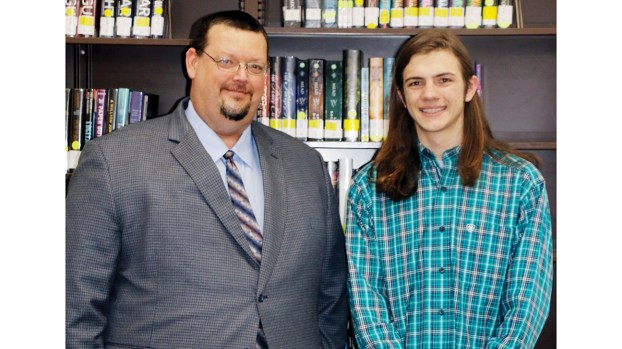 The STARs are shining in Wesson

Wesson Attendance Center’s 2020 STAR student Ashton Roberson has a lot of accomplishments to look back over and build on.

Roberson, son of Joey and Barbie Roberson and Leigh Hartsook, played football for the Cobras, was a French horn player in the Mighty Cobra Band, was part of Academic Team competition and a member of the Senior Beta Club. He takes classes at Copiah-Lincoln Community College as a dual-enrollment student. He was selected by WAC faculty for the Citizenship Award, voted Most Likely to Succeed and Senior Most Handsome by his peers, earned a spot in the Platinum ACT Club and graduated with High Honors.

In the fall, Roberson will begin engineering studies at the Bagley College of Engineering at Mississippi State University, attending on full scholarship. With a cumulative ACT score of 34, he’s in the top 1% of students in the nation.

His uncle Brad Roberson and cousin Reid Roberson were both STAR students, as well.

He chose Rod Martin as his STAR teacher.

“Mr. Martin is someone I consider a mentor and have deep respect for as a person,” he said.

Martin has taught for the past 23 years, 16 of those at Wesson in grades 7-12. He’s also been tennis coach for eight years and Academic Team sponsor every year he’s taught at WAC.

His proudest honor as a teacher, he said, is that he has been selected as STAR teacher five times by Wesson students.

“Wesson has so many outstanding educators who equally deserve recognition for their hard work and dedication to helping their students learn, so to be chosen from among those worthy ranks by a student of the highest caliber is really something special and never to be taken lightly. Students as intellectually and musically gifted as Ashton are exceedingly rare and a joy to teach, so I am absolutely humbled to have been his choice for STAR Teacher. He is an amazing young man with incredible potential and a terrific support system in place, so we all expect great things from him in the future as well,” Martin said.

Martin is married to the former Penny King, also a teacher at Wesson, of the Strong Hope community, and is father of Jessa Martin Greer, 24, and Noah Martin, 21. Martin is an active member of Strong Hope Baptist Church, where he serves as video/presentation coordinator and “pastoral sidekick.”

Martin has also been named Teacher of the Year at Hazlehurst Middle School and Wesson High School in previous years.

“I’m not really sure why Ashton chose me as his STAR Teacher. I’m not the kindest, or smartest, or most professional, or most loved teacher at the school. However, I love my career, I love learning, and I love challenging all of my students to achieve more than they think they can achieve,” Martin said.

“I set very high expectations for myself and for my students, and try to communicate those expectations to my students in a way that is inspiring rather than discouraging. Maybe Ashton appreciated that.”

“I truly believe that the greatest satisfaction of teaching is the knowledge that one has made a definite positive difference in the life of a student,” he said. “So often, teachers go home at the end of the day doubting themselves in this regard. They wonder if they are actually accomplishing anything worthwhile and lasting. Being chosen as STAR Teacher is the greatest reward a teacher can receive because it is a top student’s acknowledgement that a teacher has, in fact, made a positive difference in that student’s life. It is both gratifying and humbling at the same time.”

Roberson took the college prep test for the first time as a sophomore, then five more times to improve his score. His strategy was completing ACT prep work individually and with a teacher.

“I am a good test taker, but you need to put in the time,” he said. “Really look over math and language rules.”

Martin stressed the need to study and be aware of what’s on the test for students planning to take the ACT.

“Know what to expect on every section — what skills are tested and how. Practice with time limits. Never get discouraged; just get better. Find quality resources that will help you with ACT-specific strategies,” he said. “My last piece of advice is this: read all the time to improve your vocabulary and your reading speed. If you really try your best, you can score over 30. Believe it and achieve it.”