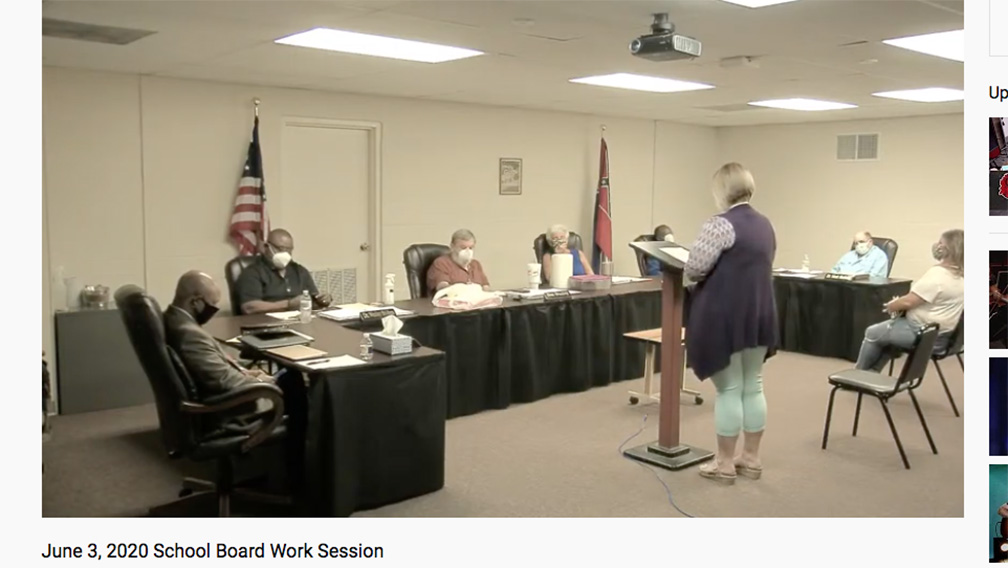 A school board member has apologized for comments made at a recent meeting.

Dr. Mark Herbert addressed the school board, superintendent Titus Hines and others in attendance at the Lawrence County School Board’s work session Wednesday.

Video of the entire meeting can be found at https://youtu.be/yrrvehZ51VI.

At the 2 hour, 18 minute mark, former Lawrence County School District special education teacher Nikki Pierce addresses the board. Rev. Wesley Bridges, board president, called Pierce to the stand as the next person on the meeting’s agenda.

Pierce began by saying she would like to address her comments to Herbert.

“Point of order. Only thing can be addressed is what’s on the agenda,” Herbert responded.

“I signed up to speak so I have permission to …,” Pierce answered.

“Say whatever you want to say,” Bridges said to Pierce, then to Herbert: “I’m chairing this meeting.”

Herbert responded, “OK,” and Pierce began to state her concerns.

This law was enacted, Pierce said, “because the words ‘retarded’ or ‘retard’ have been used so often to degrade or insult people with intellectual disabilities.”

“I grew up hearing people call my brother this awful word and it always hurt my heart for him,” she said. “I knew as a child that it was wrong. Apparently, not everyone feels the same way about this word. I’ll admit I have a personal reason for my feelings, which is why I’m here today. Growing up with a special needs brother led me into a career teaching special education and I want to educate you on this corporal punishment law, which you so nonchalantly spoke about at the last meeting.”

Pierce referenced House Bill 1182, section 37-1157, paragraph 3, which prohibits school personnel from using corporal punishment on students with disabilities — students who have Individualized Education Plans or 504 Plans. Students with 504 Plans have physical or mental impairments that substantially limit one or more life activities, either temporary or permanent.

“‘Retard’ does not describe, nor belong in, any of those eligibility categories. When you referred to the disabled students as ‘retards,’ whether you knew it or not, you weren’t just referring to the students who once upon a time would have had the eligibility of ‘mental retardation’ or, in today’s terms, ‘intellectually disabled.’ You were referring to hundreds of students who work hard everyday to overcome their learning disabilities, and so many of them do,” said Pierce.

“They receive high school diplomas along with their peers because of the support that they get from their parents and teachers, and the hard work and dedication that they put in themselves. So when you laugh and called them ‘retards,’ you truly have no idea what you’re laughing at. Luckily, more often than not, they are surrounded by encouraging teachers cheering them on, telling them how good of a job they’re doing, and how for they’ve come and what they’re capable of. Thankfully, most of them will never hear about this school board member calling them names and laughing at them. It’s really such a shame that a derogatory comment would come from an adult.”

Pierce then addressed the rest of the board and attendees, saying, “And to everyone else who was in the room and laughed, and didn’t speak up in defense of the most vulnerable population of students, you should be ashamed, as well. The question is now, what’s going to be done about it? Thank you.”

When Pierce sat down, Herbert asked, “Can I address this?”

“No,” Bridges responded, unless Herbert wished to apologize.

Herbert said he did.

“Yes, I said the word, and as soon as this … I didn’t even get to finish the meeting, I knew it was wrong. I have a special needs that lives with me that I’m the caretaker for. I know it’s wrong. Anybody offended, I want to apologize for,” Herbert said. “Anybody I’ve offended, I want to apologize to. It was wrong and thank you for trying to educate me, and hopefully it will never come out of my mouth again.”

Pierce thanked him for his apology.

President calls out board member, superintendent

On Tuesday, Bridges addressed the issue of Herbert’s offensive statement on his Facebook page, saying several people had asked what he should do about it. He wrote that those who were offended should attend board meetings and make their feelings known.

“I didn’t elect them so I can’t un-elect them,” he wrote. “There is absolutely no place for bigotry, slurs, (racists, homophobic, degrading or otherwise) or racism in public service.”

“So, yes, I think Mr. Herbert should resign,” Bridges wrote, adding, “along with the Superintendent of LCSD for telling Principals not to hire African American Assistants Principals. What? You didn’t think Hines gets a free pass because he’s black did you? So, I guess I’ll see my advocates at the work session meeting tomorrow morning and regular meeting Tuesday June 16th demanding both?”

Messages from The Daily Leader to Hines’ office were answered Thursday via email.

“It is unfortunate that a member of the school board would make a statement such as this on social media,” Hines wrote. “I, unequivocally, deny making that statement and I would never make such a statement. I will address this with the board in the proper manner.”

Hines is expected to address the issue at the next regular meeting of the board on June 16.