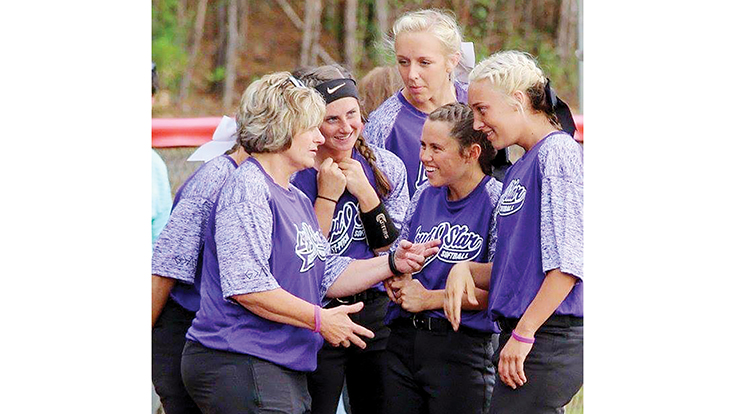 An institution in the county sports scene is hanging up her spikes as Loyd Star softball coach Jan Delaughter recently retired from her alma mater.

A 1979 Loyd Star grad, Delaughter won two state titles at the school — a 2A state basketball championship in 1991 and a fastpitch state title in 2009.

A math instructor who has taught a little of everything over the years, Delaughter has most recently taught trigonometry, pre-calculus and other upper-level math classes.

“I don’t think there is ever an easy time when it comes to making this decision,” said Delaughter. “There is always another good group of players that you want to coach or a special class coming through the school that you want to teach. It’s not a decision I made lightly.”

In 2019, the Lady Hornets finished 21-7-1 as they swept through Region 7-2A with a perfect 6-0 division mark. They made it to the third round of the playoffs where they were knocked out by Enterprise-Clarke.

The 2020 team had similarly high hopes but COVID-19 shut down the season when LS had a 5-3 record.

“Brooke (Delaughter’s daughter and one of her assistant coaches) wanted me to come back for one more year because of how the season ended,” said Delaughter.

Brooke was the starting pitcher for that 2009 state championship team that finished 31-1-1. Delaughter was pregnant with Brooke in 1991 when her team won the 2A state basketball championship.

The Lady Hornets defeated an unbeaten Bay Springs in the semifinals and an unbeaten Belmont in the finals to win the title. They were runners-up the following year too.

“After we beat Bay Springs on a last-second shot by Heather Watts the players started piling on top of each other on the court,” said Delaughter. “One of them pulled me down, too, and I was six months pregnant. I was yelling for them to get off me.”

Delaughter coached hoops at the school for five total years. She also had a four-year period when she was out of education as her family opened a sporting goods store.

In 2001, Delaughter returned to the school and started building the fastpitch program. The school didn’t have a field on campus at the time.

For those first few years they would practice at what was then a recreation department field at Mamie Martin School. Home games were played at the Hansel King Sports Complex.

“I’d have to load everything up each day,” said Delaughter. “A pitching machine, buckets of balls and water coolers would all go into the back of my SUV every day for practice. I don’t miss that at all.”

Reflecting on how she changed in the years between winning on the hardwood and winning on the diamond, Delaughter knows she softened over the years and began to prioritize more than just wins and losses.

“When I was younger coaching basketball, winning and losing were what I cared the most about,” said Delaughter. “I just hated losing so much and lucky for me I got to coach a group of girls that hated it too. I think that in these later years I’ve done a better job of teaching my teams to be humble in defeat and learn from it.”

The softball team has had a successful “Strike-Out Cancer” game every year along with other civic-minded activities.

“We’ll visit some of our older fans around the holidays and there are different service projects that we’ve worked on over the years,” said Delaughter. “I hope that I’ve taught them to do more for others.”

Delaughter was a standout basketball player herself for Loyd Star. She then played at Copiah-Lincoln Community College.

Her son Matthew was also a Loyd Star baseball and football star who played the former at Co-Lin.

“Coaching and teaching is definitely a calling,” said Delaughter. “You’re preparing kids for their future — success or failure — and that’s what I’ve always enjoyed the most about the job.”