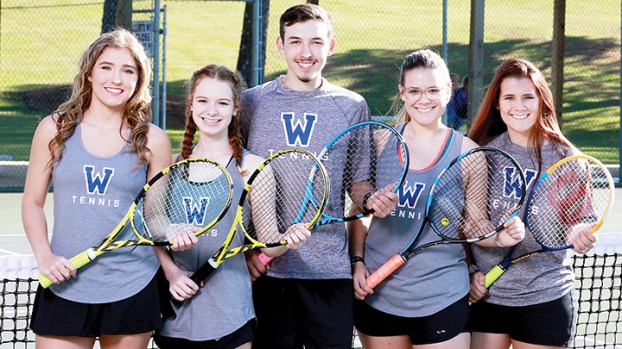 A talented group of Cobras is departing the Wesson tennis team via graduation as the squad had five seniors that made up a strong nucleus for coach Ashley Windom.

Like their other athletic cohorts at the school, the Cobras were in their first year as a member of the local 2A region for the first time after spending the previous six years as a 3A school. The onset of COVID-19 would shut down the season before division play began, though.

“This group is one of the hardest working groups I’ve seen come through the school,” said Windom. “They worked hard in the preseason to improve and were ready for a shot in the new district. I hate their senior season ended so quickly, but I have no doubt they will all go on to be very successful in whatever they choose to do.”

Wesson tennis will be under new leadership next year as Windom has accepted a teaching position at her alma mater, Franklin County.

The daughter of Charles and Nan Clark, Olivia will be attending Copiah-Lincoln Community College and major in criminal justice. A four-year member of the Wesson High tennis tea, Clark will be a member of the Colette dance team next year at Co-Lin.

The daughter of Casey and Cynthia Granger, Molly plans to attend Copiah-Lincoln Community College and then Mississippi State University while majoring in aerospace engineering. A member of the WAC tennis team for three years, Granger will be a part of the Blue Wave Show Band next year at CLCC.

The son of Matthew and Mollie Oster and Maleeda and Casey Martin, Bryce plans to attend Copiah-Lincoln Community College while studying automation and control technology. An athletic player who has only been a member of the Cobra tennis team for two years, Oster will play tennis for Co-Lin next year.

The daughter of Cliff and Anna Robinson, Lauren plans to attend Copiah-Lincoln Community College and major in nursing. Robinson played girls’ doubles with her twin sister and was a member of the Cobra tennis team for four years.

The daughter of Cliff and Anna Robinson, Madeline plans to attend Copiah-Lincoln Community College and pursue a degree in nursing. A member of the Wesson team for three years, Robinson teamed with her twin sister in doubles play.

The 2020 State Games of Mississippi are currently taking place in Meridian as the yearly summer athletic competition enters its... read more