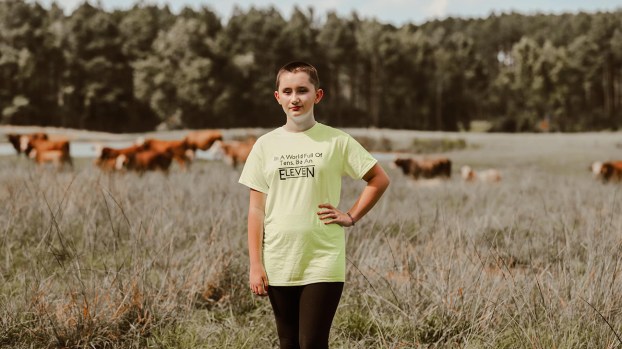 Photo submitted/ KSmithPhotography Jordyn Magee, 13, is still on her road to recovery from a brain bleed that happened June 23 — the result of an AVM, an abnormal tangle of blood vessels in her brain.

Making her way back from upside down — Lincoln County teen recovering

A West Lincoln teenager is making progress in her recovery from bleeding on her brain.

For the past several weeks, Jordyn Magee’s life could be described as upside down.

Anyone familiar with Magee’s favorite television show, “Stranger Things,” would understand that “the Upside Down” is not a place you want to be — it’s a scary world full of the unexpected.

On Tuesday, June 23, 12-year-old Magee complained to her older brother Jase that her head felt like someone was kicking it. He thought she had a migraine and sent her to their mother for medicine. By the time mom Jessica McFall had the pills in her hand, Magee was staring blankly ahead and couldn’t speak. She fell unconscious while her mother was on the phone with a 911 operator.

Fearing they could not wait on an ambulance, McFall and her husband Jason rushed their daughter to the emergency room at King’s Daughters Medical Center. On the way to the hospital, Magee vomited, lost control of her bladder and aspirated on food in her throat. She was intubated in the ER and a brain scan was performed.

The scan showed a massive hemorrhage — more than half of her brain covered in blood — so she was sent by ambulance to Blaire E. Batson Children’s Hospital in Jackson, arriving after midnight. Bad weather prevented a flight by the medical helicopter.

“They did another brain scan there, and the bleeding was worse,” McFall said. “They had to drill a hole in her skull to relieve the pressure and save her life.”

“Initially, the most difficult part was that first day, when they showed me that scan,” McFall said, saying the doctor pushed a piece of paper in front of her and told her to quickly sign it authorizing them to drill the hole in Magee’s skull — or her child was going to die.

“I signed it and he literally grabbed it and ran out the door with it,” she said. “It was the most scary thing that’s ever happened in my life.”

An hour later, the McFalls were told about a large blood clot that had to be removed once Magee was stable enough.

Magee had an arteriovenous malformation, more commonly known as an AVM — an abnormal mass of blood vessels connecting arteries to veins, disrupting normal blood flow and circulation of oxygen. Vessels were capped off and Magee was kept in an induced coma until doctors felt it was safe to remove the mass.

Only one person in a million suffers from an AVM, and the condition can be passed genetically. McFall said she and the rest of her family who are blood-related will be tested for the gene. There’s also a slight chance a mass could regrow in Magee. She has difficulty talking and most of that is done in a whisper.

The first thing that comes to mind when McFall thinks of the positive moments through all of this is the moment Magee whispered, “Momma.” Tears of happiness flowed from McFall, and she posted a short video to social media of Magee repeating it for her.

She doesn’t remember the headache or most of what happened in the hospital, but Magee remembers things from before June 23, and her favorite TV show. She was upset when she discovered her head had to be shaved for surgery, but her mother reminded her of “Eleven” — the female teen lead character in “Stranger Things,” who had a similar hairstyle in season one.

“Now you can pull off that Eleven hairstyle you’ve been afraid to do,” McFall told her. “That made her OK with the shaved head.”

The last week of July, Magee was discharged from Batson and sent home. That Friday, Magee’s birthday, friends and well-wishers participated in a celebratory parade down Wroten Lane to Magee’s grandparents’ home, where she was, to welcome her home and wish her a happy 13th birthday.

McFall is not sure what the future holds for her daughter.

“She does really good. She doesn’t show emotion, really. She gets aggravated but doesn’t cry or get mad or anything,” McFall said. She’s not sure if that is a side-effect from the brain injury or evidence that Magee isn’t letting all this overwhelm her, but is hopeful and determined. McFall is choosing to believe the latter.

“I have to believe in a full recovery, but I don’t know,” McFall said. “There’s always that fear that she’ll never get back to cheerleading or jumping on a trampoline, riding on a skateboard, going back to school. And that’s her goal — she wants to jump on the trampoline.”

McFall once wondered if her daughter was ever going to wake up, walk again, talk again. But the encouragement and prayers of family, friends and strangers have kept them going.

Jordyn Magee is home with her mom, stepdad, brother Jase Magee and little sister Jacie McFall. Her father, Calum Magee, was able to visit his daughter only through FaceTime while she was in the hospital, due to COVID-19 restrictions, but they were grateful they could do at least that.

McFall encourages others to keep praying for Jordyn and their family and is very grateful for what they’ve already received.

“When I sit and read the messages and prayers, there’s no way I can repay or even thank everybody for what they’ve done to help me or Jordyn or my other kids. I don’t know how we would have made it without the support,” McFall said.

“It’s mindblowing to me.”

For a third day in a row, Mississippi’s COVID-19 numbers have drastically fallen. New cases reported by the Mississippi State... read more