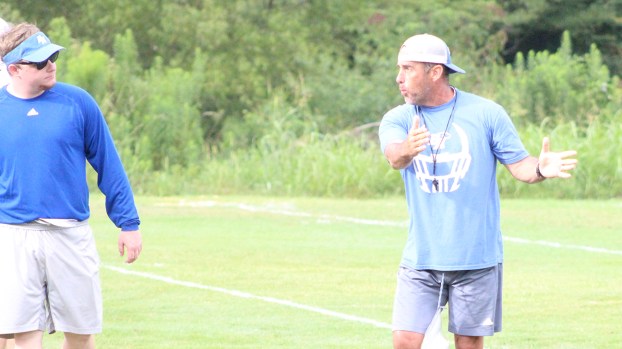 Photo by Cliff Furr Brookhaven Academy head coach Ron Rushing and his team are the first in the area to play football as the Cougars begin their season Friday at 7 p.m. in Bay Springs at Sylva-Bay Academy.

The Brookhaven Academy Cougars get their MAIS regular season kicked off Friday when they travel to Bay Springs to take on the Sylva-Bay Academy Saints.

The Cougars have had two weeks of scrimmages to tune up for their opener. First, they took on the St. Aloysius Flashes two weeks ago and then played the Simpson Academy Cougars last Friday.

BA head coach Ron Rushing was much more pleased with the effort against Simpson than he had been the week before.

“We got after it with Simpson and I feel like we matched them pretty well,” said Rushing. “We cleaned a lot up and improved in some areas where we didn’t play good enough the week before.”

The Cougars are a member of the MAIS 4A classification while SBA is a 3A school.

Last season the teams met in the season opener at Copiah-Lincoln Community College in the KDMC Kickoff Classic.

Sylva-Bay ran back the opening kickoff that night as they quickly built an 18-0 lead.

Rushing has a veteran team led by a senior class of 14. There are 30 players on the roster in grades 10-12.

The offensive line is a veteran group as they’ll most like start five seniors along the line. Center Tate Rushing, guards Daniel Falvey and Blaine Dunaway and tackles Caleb Carithers and August Sullivan are all seniors who were part of an offensive line unit that grew up as the 2019 season progressed.

The group will be blocking for a second-year starting quarterback in junior Tyler Fortenberry. Last season as a sophomore Fortenberry threw for 1,636 yards and 15 scores. He also rushed for 588 yards and seven touchdowns.

A year wiser while still growing bigger and stronger, Rushing says Fortenberry will be better as a passer and a runner this season.

A strength of the team is the depth of their receiving group. Expect Dylan Fortenberry, Rob Johnson, Jalen Huffman, Corey Case, Trey Fortenberry, Gavin Brogden, Collin Waldrop, Gage Brown and Trevor Fortenberry to all be receiving options for the Cougars in 2020.

The running game features some players stepping into bigger roles this season as the pair of senior Luke Johnston and junior John Rivers Brown trying to replace the productivity of now graduate ball carrier Nick Ogden.

Ogden was also an important piece defensively as a linebacker. That’s the spot with the most turnover on the defense, as the Cougars also must replace Gunar Brister.

Junior Peyton Reid and sophomore Easton Boyte are two younger players that Rushing will plug in at the position.

Brogden and Waldrop will be the safeties while Huffman and Johnson hold down the cornerback spots. A standout in baseball and basketball, Brogden is in his first season with the football team.

On the D-line the Cougars have some size at their tackle spots with senior Cade Watson and junior Bradon “Big Rig” Smith. Watson is coming off a season that was shortened by a knee injury.

Sylva-Bay will try to run the ball as one of their best players is senior offensive and defensive lineman Holden Brown.

“They’re always going to be well-coached and play hard,” said Rushing. “We sure don’t want to have the type of start we did last year.”

Kickoff in Bay Springs is scheduled for 7 p.m.