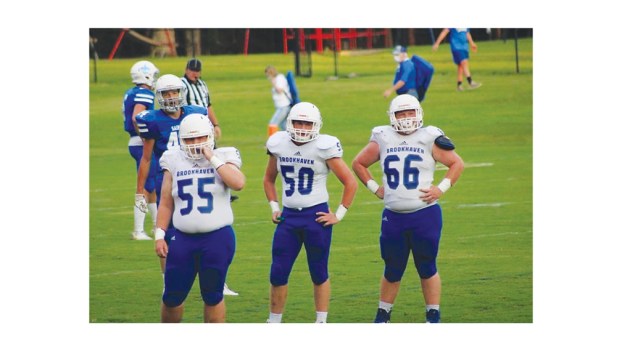 Photo by Angela Carithers Brookhaven Academy linemen, from left, Tate Rushing, Carter Smith and Caleb Carithers look towards the sideline last week at Sylva-Bay. The Cougars will play Amite School Center Friday night in a game that has been moved to the campus of Copiah-Lincoln C.C. in Wesson.

The Friday night MAIS high school football matchup between Brookhaven Academy and Amite School Center will now be played in Stone Stadium on the campus of Copiah-Lincoln Community College.

The game between the Cougars (1-0) and Rebels (1-0) was previously scheduled to be played on campus at Brookhaven Academy.

The weather forecast for Friday calls for an 80 percent chance of rain and storms. Stone Stadium has an artificial playing surface that debuted last season and BA head coach Ron Rushing said that was one reason for making the switch.

The move to the larger venue of Stone Stadium also allows for more Cougar fans to watch the team in person. Gov. Tate Reeves had previously decreed via an executive order that capacity would be limited to two fans per participant at high school sporting events.

Now that the game is being played in a larger college stadium the attendance is capped at 25 percent of the venue’s capacity. 25 percent fan capacity at Stone Stadium is 1,250 people.

“Masks will be required for entry and once you get inside and can socially distance it’s only recommended,” said Rushing who also serves as athletic director at the school. “It’s also recommended for places like the concession stand or restrooms where it’s more difficult to socially distance. We’re also working on live-streaming our games for those that would prefer to watch online.”

Classic against Sylva-Bay Academy. MAIS 3A Amite School Center opened their season on Aug. 14 at home against Hillcrest Christian. ASC built a 24-0 halftime lead to take an easy 38-6 victory in Liberty.

The 3A class is the smallest 11-man football division in the MAIS and Amite School Center only has 22 players listed on their roster.

Last week they were scheduled to play against Silliman Institute, but that game was cancelled. In 2019 Amite School Center finished 1-9 including a 46-7 home loss to BA.

Senior quarterback Jesse Mellinger led the ASC offense in the win over Hillcrest with 133 yards and two scores on just eight carries. He also scored on a punt return.

In the matchup last season with ASC then sophomore quarterback Tyler Fortenberry threw for 226 yards and three scores in the win. The game was tied 7-7 after the first quarter last year before the Cougars scored 25 straight in the second quarter to bust things open.

Friday at Sylva-Bay Academy the now junior Fortenberry was nearly perfect through the air as he finished 20-of-22 passing for 217 yards and two scores. Seven different Cougars caught a pass in the 35-7 win.

The Cougar defense gave up one big play that put Sylva-Bay up 7-0 early but pitched a shutout from that point forward.

Kickoff in Stone Stadium is scheduled for 7 p.m.

Kelby Bowman remembered by those he touched

Brookhaven and the fraternity of football coaches throughout the state are mourning the death of Kelby Bowman this week. A... read more