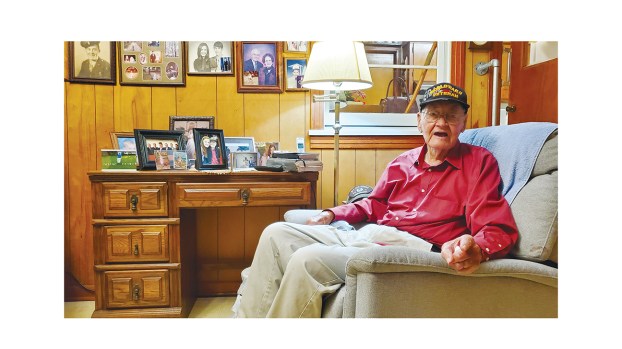 Cecil Rhodes has been around a while, longer than microwaves, cell phones, televisions and vacuum cleaners.

He was born in 1920 in Neshoba County, and has lived in Brookhaven for 71 years. He’s seen more things and people come and go than the vast majority of people still living in the area.

In fact, of men living in the Southern United States, only approximately 0.01% live long enough to see their 100th birthday. But Rhodes — or “Mr. Cecil,” as most people call him — will celebrate his centennial birthday Sept. 6.

That Sunday, he plans to smile and wave at well-wishers as they drive by his home on Rhodes Lane just off Halbert Heights Road in a drive-through birthday parade his daughter is planning for him from 3 until 4 p.m. Monday, he plans to relax and be glad “all the hullaboo is over.”

Mr. Cecil is a tall thin man who was often seen prior to the COVID-19 pandemic at various events around town, at his church home at First Baptist Brookhaven or sharing coffee and conversation with his buddies at Burger King. He would have his wooden cane and be wearing a World War II veteran cap and a near-perpetual smile.

“I have been so blessed,” he said repeatedly, thinking back over his long life and the experiences he’s had.

Rhodes grew up on his father’s farm, working and playing with the children of other workers, many of them members of the Choctaw Nation native to Central and Southern Mississippi. One of his best friends was a Choctaw boy named Ben Ed.

One of his earliest memories is walking with his older brother Hayes to school. The 5-year-old and 7-year-old walked one mile to get to the “school bus” — two mules and a covered wagon — and his brother was never in a hurry to get there on time. But little Cecil enjoyed school.

At age 22, he was drafted into the Army Air Corps, the predecessor to the Air Force, and served until the end of World War II in November 1945, when he sailed back into New York City and was able to see the welcoming sight of the Statue of Liberty. He and about 16 million other members of the Armed Forces returned to their homes, many of them changed men, to changed situations. His three brothers had also served in the war, and one made the ultimate sacrifice in France at age 20.

When Rhodes stepped back inside his Mississippi home, he was greeted by one of his three sisters, and by the news that his mother had died two months earlier, on Rhodes’ 25th birthday.

So his homecoming was bittersweet and his birthday every year since has been, as well. But even as he recalls the sadness, he follows it quickly with another declaration of how much God has blessed him.

He was married to his sweetheart Olivia until her death in 2006, and they had two children, a son named Byron and a daughter named Sheila. He now has three grandchildren and six great-grandchildren.

“He’s been a good example of a daddy,” Sheila said.

He exercises some every day and his neighbors check on him often, Rhodes said. A former neighbor named Carson, 91 years Mr. Cecil’s junior, used to help Rhodes plant and tend a garden, and Rhodes would make it a point to check the tomato plants daily.

“The tomatoes looked the same as they did the day before,” he said, chuckling. “But it’s therapy for me.”

But there’s no “secret” to living long, he said. It’s just a blessing God has given him.

Rhodes said he decided to follow Jesus at age 10, and was baptized in the neighbor’s cow pond, after they chased the cows out of it. Since then, he’s made lots of mistakes — regret and guilt last so much longer than whatever temporary pleasure sin gave him, he said — but he’s tried his best to follow the Lord.

“I try to live a good life, treat my neighbor like I want to be treated. I’ve got two good children, good neighbors who look after this man.”

As the 75th anniversary of the end of the Second World War approaches later this year, the former social studies teacher, basketball and baseball coach, Sunday school teacher and Lincoln County Health Department retiree said the worst thing he experienced in wartime as ground support crew in England were the repeated bombings that hammered out so much destruction on the cities nearby, and the loss of friends who sacrificed their lives in support of their country. The best thing, however, was the development of more friendships, some of which remain going today.

“I know I keep saying it,” Rhodes said, “but I’ve just been so blessed.”

The Brookhaven icon and guineafowl “Lil G” was found dead Friday after a presumed accident. Residents of Brookhaven were saddened... read more