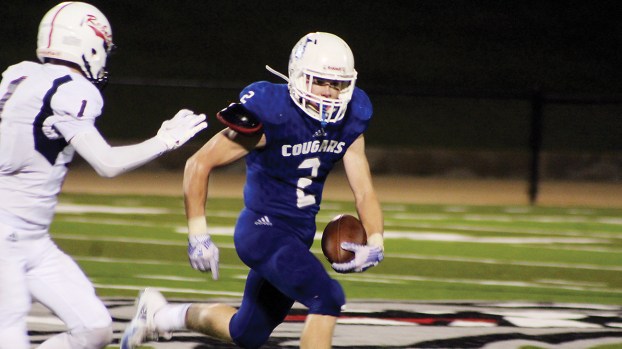 Photo by Cliff Furr Brookhaven Academy running back Gavin Brogden takes a carry around the end of the Amite School Center line at Copiah-Lincoln Community College Friday night in Wesson.

Cougars dominate in all phases against Amite School Center

Brookhaven Academy (2-0) jumped out the blocks to a big lead Friday night against Amite School Center (1-1).

The Cougars led 22-0 at the end of the first quarter as the game clock ran continuously for most of the night in a dominating 57-0 win over ASC at Copiah-Lincoln Community College.

The game was moved to Stone Stadium to accommodate a larger crowd and the Cougar fans turned out in large numbers to watch their team play their second game of the season.

“We played well from the first snap,” said Cougar head coach Ron Rushing. “Every kid on this team contributed tonight.”

BA was unchecked in all three phases of the game as it was special teams that gave them a spark on the opening series of the game.

After the Cougar defense kept ASC pinned deep in their territory to start the game a blocked punt by Carter Smith on fourth down was recovered by BA senior Trey Fortenberry on the ASC 1-yard line.

A holding penalty backed BA up but that didn’t matter as junior quarterback Tyler Fortenberry found his older brother Trey on a 7-yard TD pass with 9:12 remaining in the first quarter.

The Rebels had their best play of the night on the next drive as a fake punt on 4th-and-13 picked up the first down and more to move them into Cougar territory.

The BA defense stiffened though to get the ball back on a later failed fourth down attempt by the Rebels.

It was Tyler to Trey again in the quarter as the pair hooked back up for a 29-yard score.

In the second quarter Tyler Fortenberry threw two more scores, both of them going to his cousin — senior Dylan Fortenberry.

The first of the two TDs went for 28-yards and the second for 35-yards.

Tyler Fortenberry also scored on a 23-yard run in the second quarter.

Rushing was able to substitute heavily in the second half as the younger Cougars kept the heat up on the Rebels.

“We’re pretty deep, especially on the line of scrimmage and our young guys are pushing our older guys at practice and that’s making us better,” said Rushing.

Sophomore Trevor Fortenberry made sure that everyone in his household got a TD on the night as he returned the second half kickoff 72-yards for a score.

BA got two more rushing touchdowns in the second half — the first for 30-yards from Gavin Brogden and the second a 13-yard run by Luke Johnston.

Rob Johnson had one catch for 34-yards and John Rivers Brown had a 37-yard gain on one catch.

Tyler Fortenberry was 9-of-14 for 215 yards and four touchdowns.

A change this season for BA is assistant coach Jaymie Palmer calling the plays — a duty that Rushing has held since coming to the school in 2016.

Rushing is working more on the defensive side of the ball this season along with coordinator Jarod White. The two can be seen coaching that unit up on the sideline when the offense has the field.

It’s a change from the past when Rushing would usually be shouting instructions to his offense as he signaled plays in.

ASC had success last week running the ball against Hillcrest Christian but had no such luck Friday.

The Cougars travel to Marion County next week for a matchup with Columbia Academy. CA fell 35-8 Friday night at Adams County Christian School.

Local MHSAA football teams can play in a scrimmage with an opponent Friday ahead of the regular season opening on... read more