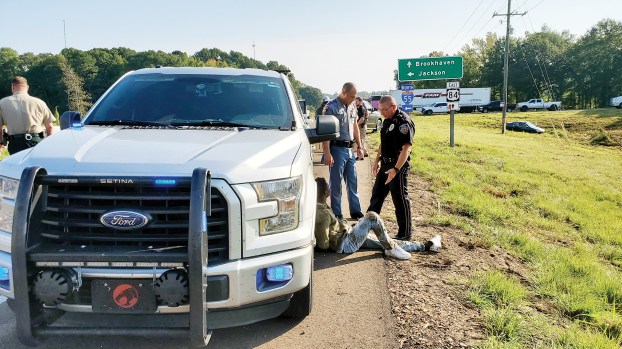 Photo by Brett Campbell / McComb Police Department Capt. Steve Powell talks with a suspect taken into custody after a high speed chase Tuesday morning that ended in a crash at I-55 exit 38 in Brookhaven.

A man and two women suspected of attempting to rob Bank of Franklin in McComb Tuesday morning were captured in Brookhaven shortly after 8 a.m. when the vehicle they were in crashed on the northbound I-55 exit 38 off ramp.

Multiple law enforcement agencies participated in a high speed chase and assisted in apprehending the suspects, including Brookhaven Police Department, Lincoln County Sheriff’s Office and Mississippi Highway Patrol. No one was injured in the chase or crash.

MPD Capt. Steve Powell told The Daily Leader an investigation was ongoing and that he could only confirm these details at the time.

This story will be updated as information becomes available.