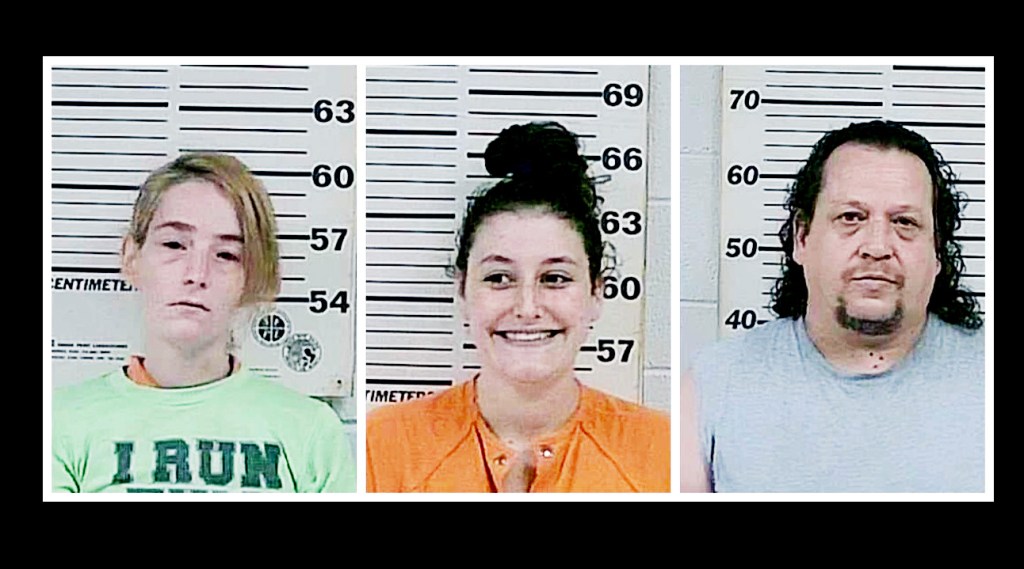 Pike County Sheriff's Office/ From left, Anna Waldron of McComb, Kalie Green of Summit and William Albright of McComb were charged — along with Samantha Dykes of McComb — in connection with video of a toddler smoking marijuana.

Multiple arrests have been made in a joint investigation of child endangerment involving drugs in Pike County.

Tuesday, agents with the Mississippi Bureau of Narcotics McComb District Office received multiple complaints about a video on social media that featured an adult giving a toddler marijuana to smoke.

Green, Waldron. and the toddler were transported to Pike County Sheriff’s Office for further interview. The Department of Child Protection Services met with deputies at PCSO to investigate the welfare of the toddler. At the conclusion of the investigation, MDCPS took custody of the toddler.

Green and Waldron. identified the individual in the video that offered the toddler marijuana as William Albright and indicated that this event occurred at Albright’s home in McComb.

Agents and deputies traveled to Albright’s residence and developed probable cause to obtain a search warrant. During execution of the search warrant, agents found that Albright and his live-in girlfriend, Samantha Dykes, were not home. Agents subsequently located approximately 50 dosage units of a Schedule V Controlled Substance and multiple items of marijuana paraphernalia.

As Agents were finishing execution of the search warrant, Albright and Dykes arrived at the residence. When questioned about the incident recorded on Snapchat, Albright admitted that he had allowed the toddler to smoke marijuana.

As a result of this investigation:

• William Albright, 46, of McComb, was charged with distribution of marijuana, conspiracy to distribute marijuana, contributing to the delinquency of a minor, and possession of paraphernalia.

• Anna Waldron, 26, of McComb, was charged with contributing to the delinquency of a minor and conspiracy to distribute marijuana.

• Kalie Green, 24, of Summit, was charged with contributing to the delinquency of a minor.

• Samantha Dykes, 51, of McComb, was charged with misdemeanor possession of a controlled substance.