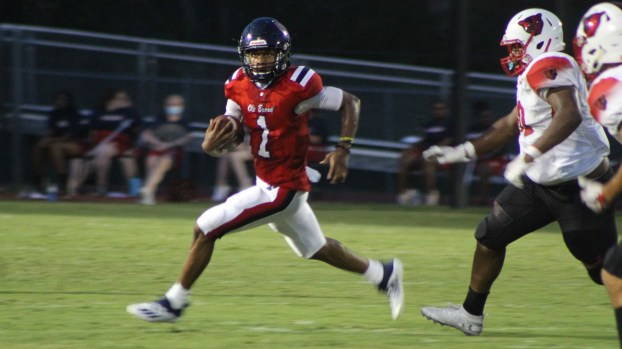 Photo by Cliff Furr Brookhaven High junior quarterback Dre Ross and his team last played on Sept. 4 in their season opener against Petal. The Panthers have had their region opener scheduled for Friday against West Jones postponed until Nov. 6 due the Mustangs having a COVID-19 case.

The Brookhaven School District announced via social media Wednesday afternoon that the home game scheduled for Friday against West Jones has been postponed.

Coming off a big comeback 34-31 win over 6A Petal High, West Jones had a COVID-19 case on its team that forced the Mustangs to take a two-week break from team activities.

The game will still be played on King Field but has been moved to Nov. 6.

Fans who have bought tickets can use them at the Oct. 2 game against Laurel High. The school plans to recognize its seniors that night, as well.

The following week, the Panthers had their game at McComb High canceled by lightning and severe weather. The team had an open date last week.

Brookhaven High, Laurel and West Jones are all members of Region 3-5A. Region members were left to scramble and fill holes in their schedules after the Jackson Public School District canceled all fall sports for their member schools in mid-August.

JPS schools Forest Hill, Jim Hill and Wingfield are Region 3-5A members.
Regular season games left on the schedule for BHS besides West Jones and Laurel include a Thursday, Oct. 8 home game against Ridgeland High.

BHS will play its first road game of the season on Oct. 16 when they travel to meet region foe South Jones.

The Panthers will host 4A South Pike on Oct. 23 and then face division opponent Natchez on the road a week later on Oct. 30.

The Brookhaven Academy Lady Cougars (15-9-1) ended their District 4-4A schedule Monday night with a 3-0 win at Cathedral School... read more