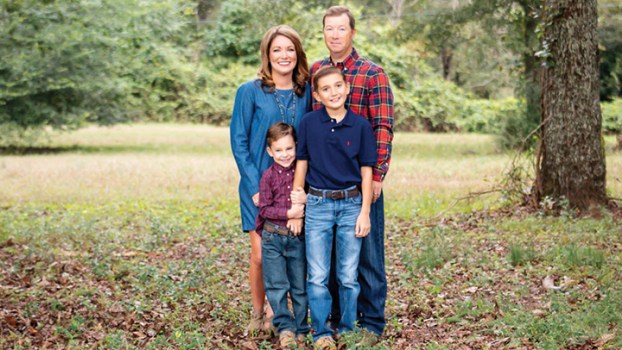 A Brookhaven couple was honored this week in a national ceremony as adoptive parents.

Josh and Olivia Watts were nominated by Sen. Cindy Hyde-Smith (R, of Brookhaven) for the Congressional Coalition on Adoption Institute 2020 Angels in Adoption honor.

“I feel like we shouldn’t be, really, but we were very honored that she thought about us. Very surprised,” Olivia Watts said.

Josh, basketball coach at Brookhaven Academy, and Olivia, librarian at Loyd Star Attendance Center, were high school sweethearts who married after college. They were unable to have their own biological children, so they began looking at other options, deciding eventually to adopt.

They started the adoption process in February 2007 and 18 months later, August 2008, they received a call that changed their lives forever — bringing their first child, J. Parker, into their lives.

As they completed paperwork in Colorado, they had to send it back to Mississippi for approval in order to bring the child home, but it was Friday and the start of a holiday weekend — so they placed a call to Hyde-Smith, who got the paperwork approved that day.

“Maybe that’s why she thought of us for this,” Watts said.

“When we started our adoption process we didn’t know anyone locally around our age that had adopted, at all, except one (who had adopted) international,” Olivia Watts said. “I didn’t really have anybody to talk to about it. But since we have, I’ve had a lot of people ask me about the process.”

It can be a long and difficult process — from background checks, extensive paperwork, expenses and the waiting — but it is very rewarding, she said.

Someone who is interested in adoption should start by contacting a social worker, who can do a home study and meet with the interested parents-to-be. Reach out to someone local, or someone recommended by a trusted friend.

“Things change from state to state, and if you do international, and foster care is different. Even from year to year, stuff changes,” Watts said.

Emotionally it can be “a roller coaster,” she said.

When they were awaiting adoption for the first time, the couple received a call that a little girl was available, but then one month later they were told the birth mother had changed her mind. They were disappointed, but didn’t lose hope.

“We kept telling ourselves we can’t get the wrong baby. We’ll get the child God wants us to have,” Watts said.

Their social worker told them not to worry — when it was all over they’d have a story.

As J. Parker grew, the family knew they wanted to adopt another child, and J. Parker kept asking when he could have a brother. “When God wants you to have one,” was the answer.

When J. Parker was 5 years old, the family was about to travel on a planned vacation when they received a call that a child was available — a brother for their son — and would be just a few hours’ drive from where they were already about to travel on vacation.

They didn’t tell J. Parker, in case things changed, but the night before they left on the trip the boy prayed and said, “I’m asking God one more time.”

And God gave him a brother, Jackson, now age 6.

“I remember when we started (the process), we would say things like, ‘Do you want a boy or a girl?’ and ‘I wonder what they’ll be like when they’re 5,’” Watts said. “One is like me and one is like Josh.”

Watts said her parents and Josh’s were all very supportive all along, in every way, and they could not have completed the process without them. She also said it made her relationship with her husband even closer.

“You learn a lot about each other through the process. If we had to do it all over again, we would not have changed a thing.”