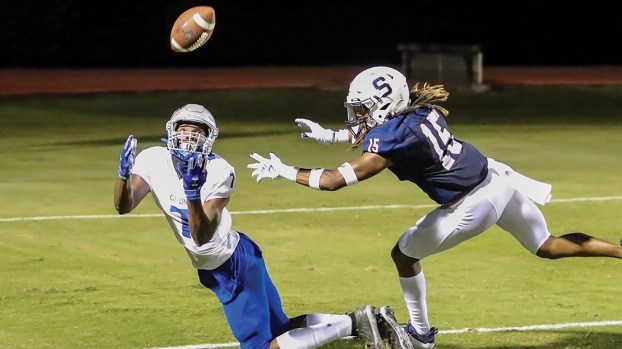 Photo by Chuck Barnes/Co-Lin Sports Info Co-Lin freshman receiver Tyquan Henderson dives to make a catch in front of Southwest defensive back C.J. Johnson Thursday night in Summit. Henderson finished with a pair of touchdown catches in a 41-3 win for the Wolves.

It took about a quarter and a half for the Copiah-Lincoln Wolves to get rolling Thursday night in Summit against Southwest Mississippi Community College.

Once Co-Lin settled in, though, there wasn’t much resistance in a 41-3 opening night win for coach Glenn Davis and his team.

Running its triple-option offense, Southwest had its best drive of the night on the opening possession as a 37-yard field goal by Josh Massa put the Bears up 3-0.

That first Southwest drive covered 60-yards — for the rest of the game the Bears gained only 105 total yards.

Co-Lin got two Bryce Lofton (Pisgah HS) field goals in the first half. The first TD of the night for the Wolves came on a 2-yard run by sophomore back Lakenith Thompson (Callaway HS) late in the first quarter.

The best drive of the opening half came with just under two minutes remaining as CLCC went 64 yards in less than 90 seconds.

The Wolfpack’s 6-foot-2, 185-pound freshman receiver Tyquan Henderson (Canton HS) made a diving catch just past the goal line for a 36-yard score that put Co-Lin up 20-3 at the break.

The Wolves received to open the second half and put together an 11-play, 76-yard drive that ate up five minutes of clock.

The drive was capped when sophomore receiver Erick Rogers (Shannon HS) pulled in a 10-yard pass from Hargrave.

Henderson and Rogers finished with eight catches each to lead the receivers. Eight different Wolves caught passes in the win.

Rigby threw an interception on his first drive but had a pair of touchdown passes later in the game. One went to Henderson and the other — the last CLCC score of the night with 3:10 left in the third quarter — went to sophomore Malik Jones (Crystal Springs HS).

Sophomore running back Drexlan Allen (Hattiesburg HS) had his best night since last year’s season opener as he rushed 14 times for 84 yards. Thompson finished with 61 yards as the Wolves had 146 yards on the ground as a team behind a veteran offensive line.

Sumrall made five tackles while Pierce had three and Kelly one.

Another former LC Cougar — Jerome Dudley — started for the SMCC offense as a running back.

The win was the sixth in a row for Co-Lin over the Bears and the latest opener on the calendar for the Wolves in modern history.

MACCC teams are playing a six-game, division only schedule this season due to COVID-19.

One MACCC game was canceled last night as Mississippi Delta elected to not play against Northwest Mississippi. Northwest had several players test positive for COVID-19 earlier in the week and wanted to proceed with the game in spite of one fifth of their team being in quarantine.

Thursday afternoon Delta made the decision to not play the game.

Next up for Co-Lin is its home debut, which will also serve as homecoming Thursday night. The opponent is the Pearl River Community College Wildcats. PRCC lost 42-25 against Gulf Coast in its opener.

Kickoff in Stone Stadium against Pearl River is set for 6:30 p.m.

The Adams County Christian Academy Rebels used their rushing game and defense to earn a 31-20 victory over the Brookhaven... read more